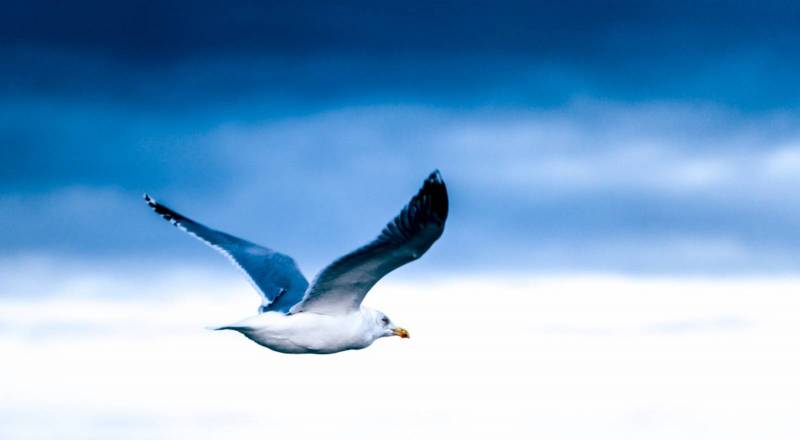 On the lush north shore of Kauai, in the Hawaiian archipelago, a group of Laysan Albatross has chosen to mate and raise their chicks in the yards of a select enclave within the resort neighborhood of Princeville.

Why is this so special?

It’s because this began roughly 20 years ago, long after Princeville was developed. This is not a case of development encroaching on wildlife, but rather, wildlife choosing to live among us. 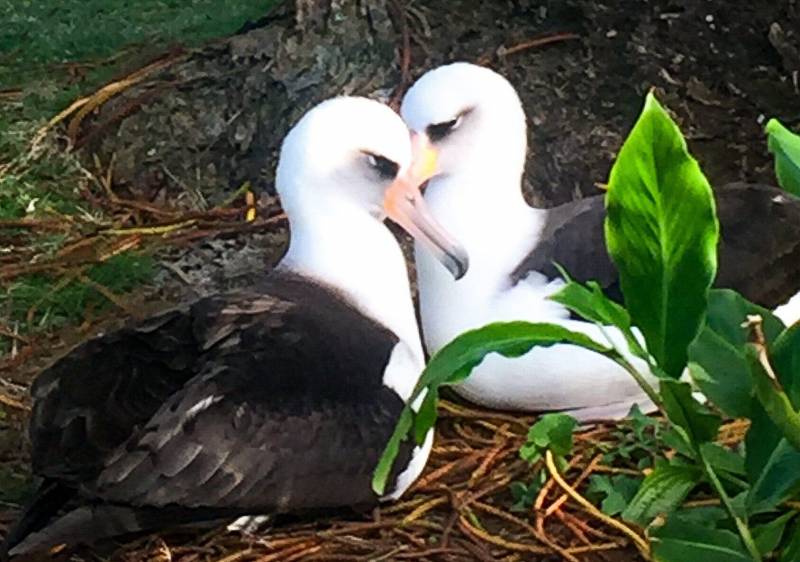 All About the Albatross

The majestic Albatross is a seabird with a wingspan of 6 feet. It traverses thousands of miles of Pacific Ocean without touching land for months, even years. The trouble is they can’t lay their eggs on water, so they inhabit many Pacific islands, Midway being a popular one, Laysan (their namesake), as well as Kauai. They reside there for the duration of raising their chicks, approximately 8 months. This occurs every year starting in November. Albatross mate for life, so previous pairs reunite and new pairs find each other. For those who are fortunate enough to witness their amazing courtship song and dance, it’s quite enchanting. The birds remain through July and into August when the chicks fledge and the adults confirm the last of the chicks have “flown the coop.” In November the process starts all over again. 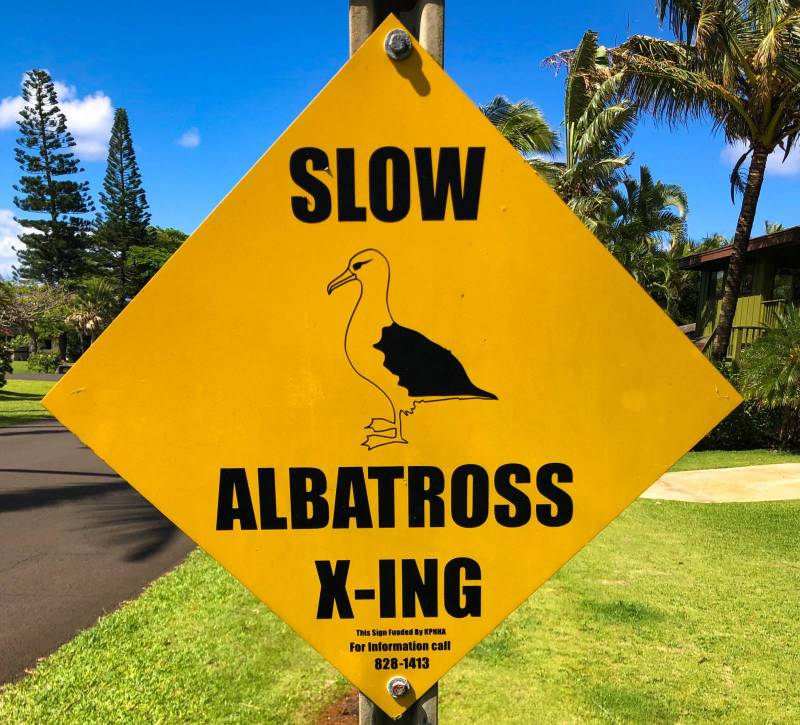 For this chosen pocket in Princeville, it is a very exciting time. The birds get busy building their nests under shrubs in the yards. The residents watch, carefully and respectfully, witnessing the growth and development of the chicks. The loving attention given to them by both parents equally is remarkable. Through the incubation process and for the first 3 weeks, the parents take turns sitting on the nest. One will fly hundreds even thousands of miles to feed. These feeding runs take up to 2 weeks. When it returns, the other will fly off and do the same. The egg and subsequent chick is never left alone during this time. 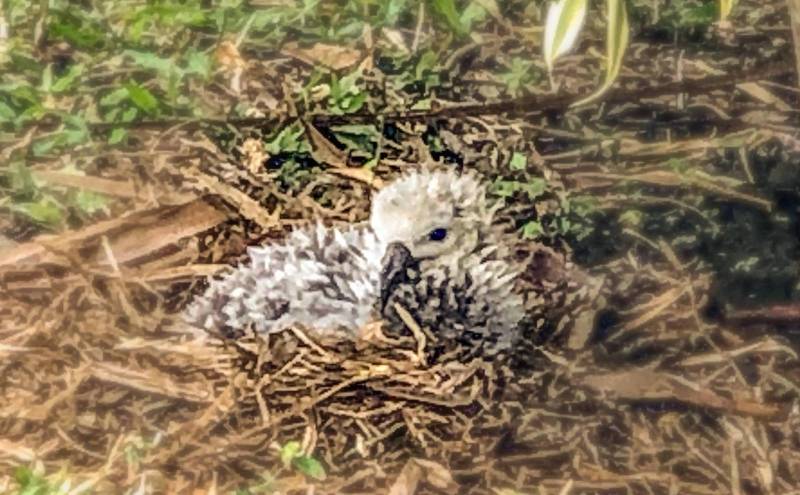 By 3 weeks of age, the chick is too large to be covered anymore. It is developed enough for both parents to leave and bring back food. The chick certainly needs it because it will grow so quickly. The adults provide regurgitated seafood that has been broken down in their stomach to which desalinated water is added. During this phase the chicks look so vulnerable — however, this is a natural part of the process to maturity. Nonetheless, many of the neighbors keep a watchful eye on the young, always respecting a 15-20 feet zone to stand back and never feeding them as this could endanger the chicks, plus draw unwanted visitors like dogs and insects. It is quite common to see neighbors, and visitors alike, with binoculars and telephoto lenses in hand so the Albatross community can be enjoyed and respected at an appropriate distance. 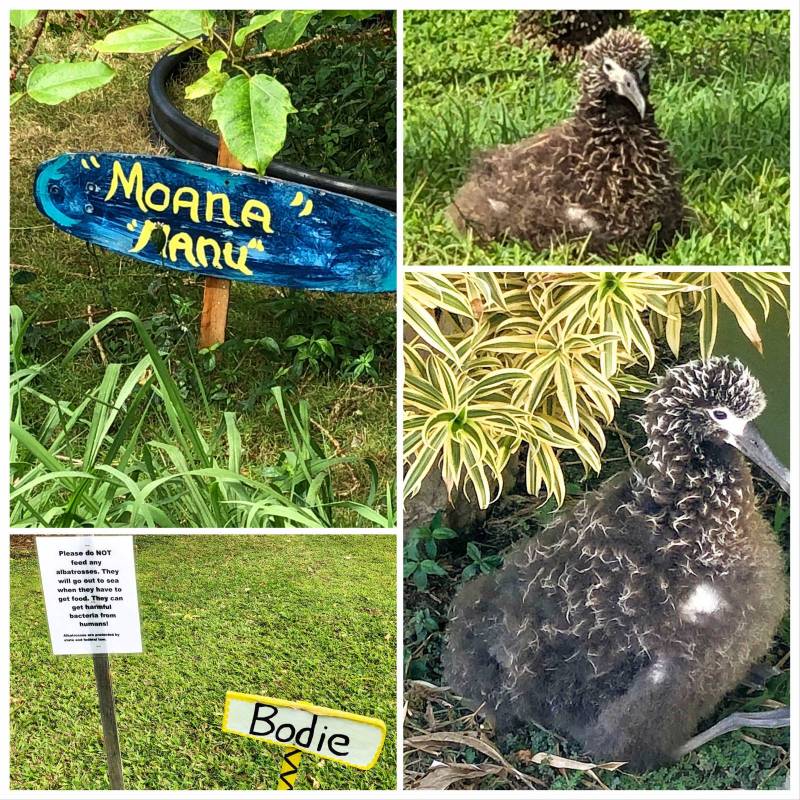 The neighbors have taken to naming the chicks. Bodie hatched this year (2019) in the yard of the home mentioned below. Last year Moana and Nanu hatched in the same yard but won’t return for a few more years, when they have reached adulthood and are ready to start courting. Frequently, and astonishingly, many of the birds will return to the same yard in which they were hatched! The US Fish and Wildlife Service does attach a number band (I call it their bling) to each chick so a record can be kept for each bird throughout the following years. 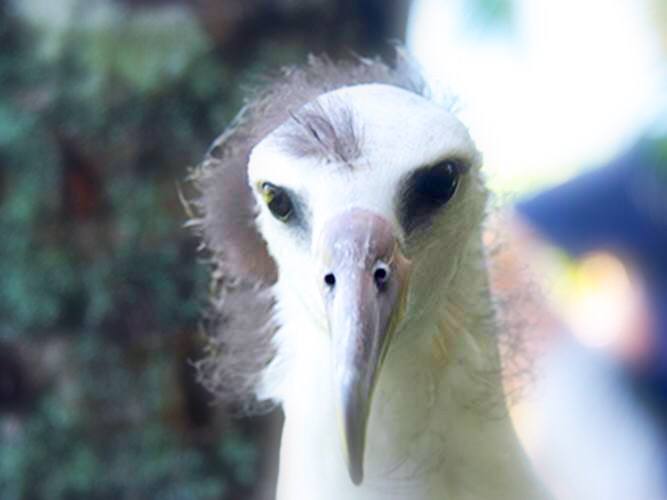 Over the course of 6 months or so, the chick will go from a fuzzy brown ball of downy feathers to the striking black and white flight feathers of the full-grown adult. The process is quite entertaining, a real show of “hairstyles” so please visit AlbatrossKauai.com to view more photos and a video captured in the neighborhood.

Mysteriously, the young Albatross knows its day to fledge, taking its first flight. The bird is excited and, all alone, makes its way to the 150 foot cliffs, seeing the ocean for the first time. After testing its wings in the wind, it runs and off it goes! All new experiences await. The young bird has never flown before, never fished and fed itself, never slept on water and will do all of this on its own. It will continue its’ first flight and explore the open ocean for 3 to 4 years before returning to land, hopefully choosing Kauai. The whole process is awe inspiring! We look forward to it again and again!

If you would like to be a part of this magical experience, there currently is an opportunity to own a superb, newly renovated home in this enclave. 3581 Kaweonui, Princeville (MLS 617834) is well suited for a first or second home and is a legal vacation rental. In addition to its serenity, it has a splendid ocean view and is quietly nestled where the Laysan Albatross have chosen to share their incredible journey with us.

For more information about this home or any other active listings on Kauai, contact:

The changing seasons at the end of summer, are not only about the swells that slowly start to greet our …