I have been writing a series of articles on essential knowledge for newcomers to Hawaiʻi. If you have not read those, you might start here: Is the Welcome Mat Out and Whatʻs in a Name. In response to the avalanche of newcomers and how many seem unprepared for life in Hawaiʻi, there has been a lot of joking among locals about a test before entry — and Iʻm not talking about a negative Covid test.

When the Swiss Guy decided to become an American citizen, he was sent a booklet with 100 essential questions. He would be asked ten in his interview, and the minimum passing score was six correct answers. When I was interviewed for Swiss citizenship, I needed to know a bit of history and politics, geography, and culture. Thatʻs the kind of test weʻre talking about.

Here are three questions from my “Welcome to Hawaiʻi” test:

No worries if you canʻt answer yet; I hope you read through to the end of this post to learn why these three questions are connected. 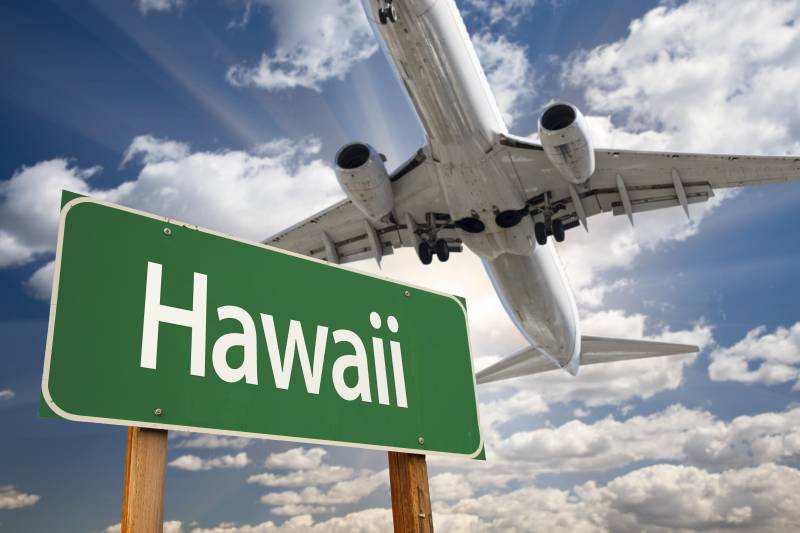 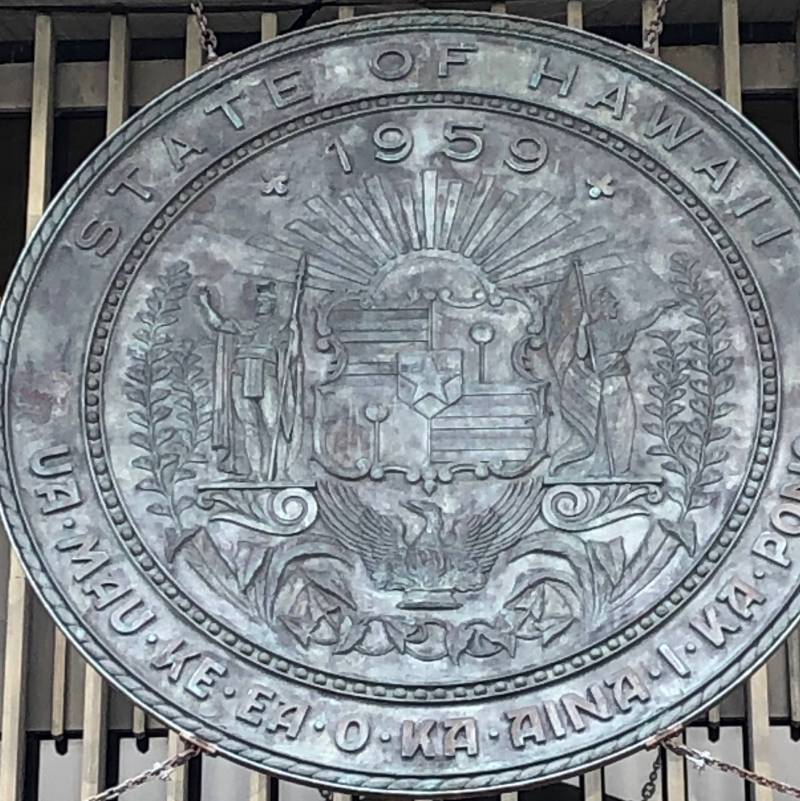 The state seal as it appears on the Hawaii State Capitol Building; it is based on the coat of arms of the Kingdom of Hawaiʻi.

The answer to question #1: the state motto of Hawaiʻi is “Ua Mau ke Ea o ka ʻĀina i ka Pono” and is usually translated with the mysterious statement “The life of the land is perpetuated in righteousness.”

You could answer question #2 with the song that follows “Over the Rainbow” on Israel Kamakawiwoʻoleʻs Facing Future album: Hawaii ʻ78. Note the album came out in 1993; the song itself was written in 1978 by former bandmate Mickey Ioane.

Facing Future is the all-time best-selling album by a Hawaiian artist. Hawaii ʻ78 is both the first and last track of the album. If you were not aware before now that there is tremendous sadness and ambivalence about development and tourism in Hawaiʻi — well, guess all of us are guilt of selective listening sometimes. Please take a deep breath, then watch and listen again: hereʻs a version I find absolutely stunning, recorded four decades after the song was written. I recommend watching this in full screen.

I wrote above that the word “ea” is translated as “life” in the context of the state motto.  While the word has several meanings, a more accurate translation in the context of the time it was first spoken is “sovereignty.” Kauikeaouli, King Kamehameha III, said these words on July 31, 1843 after the British government returned the sovereignty of the Hawaiian islands to him following a 5-month occupation by a rogue British admiral named George Paulet. Ua mau ke ea o ka ʻāina i ka pono means that the Hawaiian Kingdom lived again thanks to the “pono” actions of integrity by Pauletʻs superior, Admiral Richard Darton Thomas.

An answer then to question #3: July 31 is celebrated in Hawaiʻi as a national not state holiday, Lā Hoʻihoʻi Ea – which means “Sovereignty Restoration Day.” Among the notable accomplishments of King Kamehameha III, the longest ruling monarch of Hawaiʻi, was the adoption of a Bill of Rights in 1839; the creation of a constitutional monarchy (the form of government of Great Britain from 1688 to the present) in 1840; and the Great Mahele of 1848 which distributed lands under a European-style system of legal ownership, and for the first time allowed foreigners to own land in Hawaiʻi.

So yes, as a new or intended resident to Hawaiʻi, you should know the name of Kauikeaouli, King Kamehameha III. 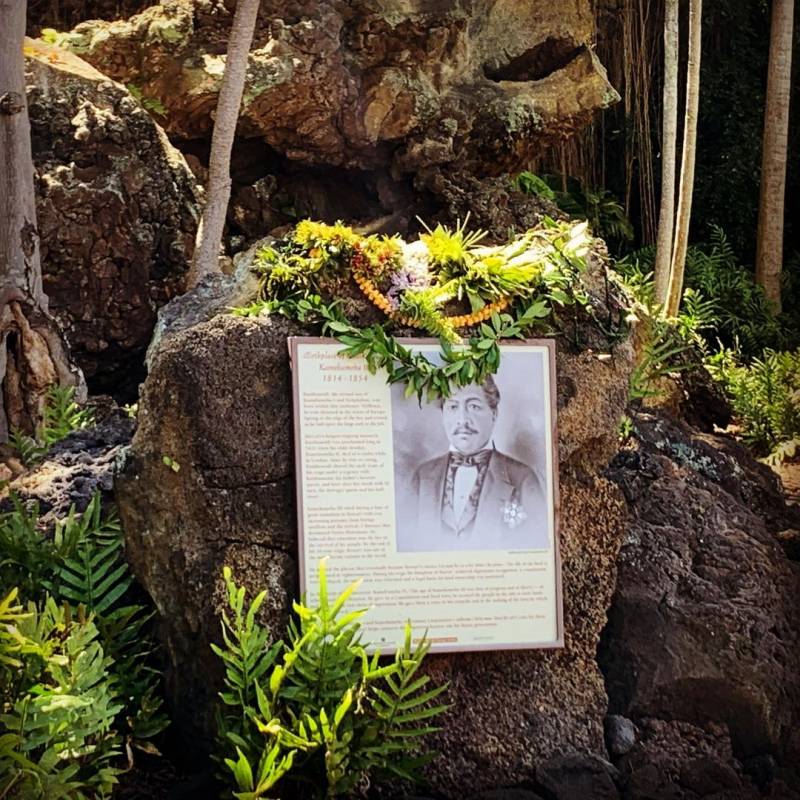 You should also know that having Ua mau ke ea o ka ʻāina i ka pono as the state motto carries a great deal of irony. The events that led eventually to statehood for Hawaiʻi began with the overthrow of the last reigning Hawaiian Monarch, Queen Liliʻuokalani, on January 17, 1893. In other words, 50 years after the British government “did the right thing,” American businessmen backed by  U.S. military forces deposed the Queen and put her under house arrest. Although President Grover Cleveland called for the restoration of the Queen, his successor William McKinley presided over the annexation of Hawaiʻi as a territory of the United States.

So to the person who commented on my earlier post that “every State has its ʻcultureʻ” let me just say: this is not the equivalent of arguing the merits of Carolina-style barbecue versus Texas-style barbecue (or how sour you like your poi for that matter). Auwe!

What This Means for You as a Visitor, New Resident, or Intended Resident of Hawaiʻi 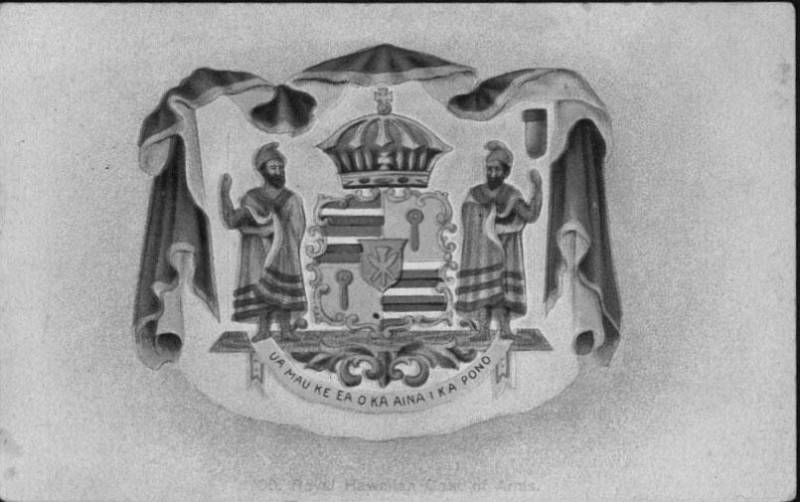 Letʻs return to the fact that July 31, Lā Hoʻihoʻi Ea is a celebration! In fact, it is a celebration of righteous action in the past by a European power. And it takes place today as a celebration of the current renaissance of Hawaiian culture, innovation, and leadership that can benefit all of us, wherever we reside on this honua.

Although the voices of contemporary Hawaiian discourse may sound angry, and it may sound like it is directed at you and me, most of the time it is directed at you and me institutionally/systemically not personally. We cannot today really know or understand what it felt like to rapidly adopt the best of haole culture within a wholly Hawaiian context, but thatʻs exactly what the brilliant Hawaiian monarchs, diplomats, and cultural leaders of the nineteenth century did.

In case you are wondering, I do not believe it is my place to have an opinion about whether or not, or in what form, to restore the sovereignty of Hawaiʻi as an entity, or how reparations might be made.

But here is why I celebrate Lā Hoʻihoʻi Ea and take the opportunity to listen and learn.

I admire and celebrate the restoration of Hawaiian culture, values, and thinking (in the epistemological sense) because the people I know who are committed to this hoʻihoʻi are some of the finest, smartest, and most loving human beings anywhere. I encourage you as a visitor or new resident to learn, to be humble, to offer your aloha as well as expect to receive aloha.

Thatʻs how ke ea o ka ʻāina, the life of the land, this land, is perpetuated. Itʻs a kakou thing.

Mahalo piha Beth, this is the most historically correct, compelling and authentically Maoli blog post I have read on HawaiiLife.com, including those I authored years ago. Maikaʻi loa. Hulō!

> He mau kumu maikaʻi kaʻu! Thanks for reading and for your kind words, Shaylyn.

Mahalo for sharing and educating.

> Thank you for reading and commenting, Sanjay

Always love reading your posts and particularly loved listening to Hawaii ’78 this morning.

Love reading your posts and particularly loved listening to Hawaii ’78 this morning.

> Cherie, I am quite fond of all the Mana Maoli videos https://www.youtube.com/channel/UCtO01TPAC35VAVFoZiqoE5g

And especially because I know Ruben and Dawn from my Hawaii Life shoots!

There is also a book entitled, “so you want to live in Hawaii” which is pretty good.

> Hi Doug, thanks for reading and commenting.

I always love reading your posts Beth. They are insightful and thought provoking.

> Thanks for reading and for your kind words, Ro.

A Hawaii Christmas Tree Farm Just in Time for the Holidays

A property manager recently alerted me that VRBO.com, the platform a short term vacation rental ignores at their peril, has …

Hawaii has a diverse and eclectic culture. This island nation has received immigrants from many countries and has been fought …

The receiving of a lei, the magic sounds of slack key guitar, the taste of lomilomi salmon and poi — …