It now looks like 2012 was the year Waikoloa Village turned the corner for condo sales as the year ended with higher sales prices. While prices have a long ways to climb up before they reach the highs of the previous market boom days, it looks like the downward trend in sales prices has ended. To get some perspective on where prices have come in just a few short years, I think it helps to look over the trend of sales prices from 2007 to 2012. 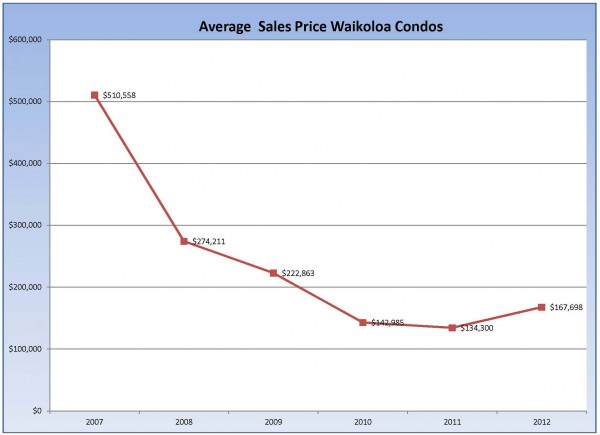 There are some other important factors along with sales prices that also show a promising trend for Waikoloa condo sales. The next chart looks at the same time frame, but looks at total number of sales, Days on Market, and the number of distressed sales – either a short sale or bank owned property. 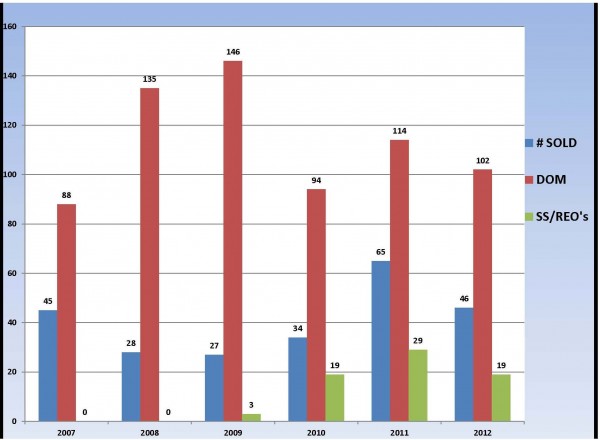 The final measure I looked at was the number of sales of “distressed properties” – short sales or bank owned condos – represented above by the green bars. These were an unknown sales type in 2007 and 2008 as there were no distressed sales in these years. They started with just 3 sales in 2009 but in 2011 they represented almost half the total sales, or 29 of 65 sales.

In 2012, the overall number and the percentage of sales of distressed properties dropped. This is an important indicator to watch for sales prices as it was primarily the distressed properties that were priced below “market value” that have affected overall prices for the past three years in Waikoloa.

Where is Waikoloa Village Headed in 2013?

At this point, inventory is very low for Waikoloa condos…and that usually means higher prices are next. I’ll continue to follow the monthly sales and let you know the trends I see.

I love the Big Island! Aloha.

Thanks, as always, for the Waikoloa Market Update Pat!

Thanks, as always, for the Waikoloa Market Update Pat!