The Eve of Veterans Day: A Snapshot of the Attack on Pearl Harbor

Happy Veterans Day to all our past and present Military! Thank you so much for what you do for America, and for keeping us great. Not everyone would do what you do, and that is why we celebrate today; your bravery, and selflessness. Today we honor you.

What a coincidence. Today is Veterans Day, and yesterday was the first time I’ve been on a tour at Pearl Harbor in over two decades. And so, I just felt like sharing a little bit about what I learned, as we are also approaching the 75th anniversary of the attack on Pearl Harbor, on December 7th of this year.

Me, also being a Waikiki Beachboy, I have gotten the question about going to check out Pearl Harbor, and didn’t know what to tell the people who asked. But now I do, and if you haven’t been there, it is definitely worth doing a tour of.

So yesterday I tagged along on a tour, as an assistant, with my friend Kahana Pukahi. He’s a tour guide with Keawe Adventures, owned and operated by Makani Christiansen. It’s a great, private, and personalized tour/adventure, with hiking, surfing, sight-seeing, kayaking, you name it. But besides the great job they do with that, they do an amazing tour of Pearl Harbor, and Kahana is among the best guides there are.

So, I met Kahana and his small private group. It was a family of three; husband Hank, wife Julie, and their young daughter, Jocelyn. Very nice people from New Jersey, and I believe it was their first time on a tour of Pearl Harbor. Kahana had already started his narration when I found them, and he introduced me. 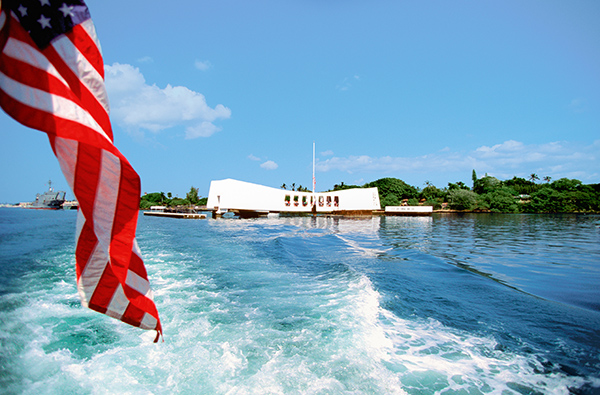 US Flag flying off the back of the USS Arizona in Pearl Harbor, Oahu, Hawaii, USA

We went in through the gates, as Pearl Harbor is free to get into. It’s just some of the other sights there that, I believe, tickets must be purchased; like the USS Bowfin and the USS Missouri tour, and maybe a couple of other things. It is free to watch a historic 23 minutes of actual footage of the day Pearl Harbor was attacked, and to go to the USS Arizona Memorial, where you can see the actual sunken Battleship, and the many names of the sailors that died aboard the vessel, as well as the survivors that were interned there upon their passings.

Before we got into the gates, Kahana explained to our guests that there was a big world map, on which, he wanted them to find 5 places. One was Hawai’i. Two was Japan. Three was Manchuria. Four was French Indo-China, and finally, five was The Netherland’s East Indies.

Next, we walked over to the shade of a huge nuclear missile, as he continued his narration. He asked them if they knew when the attack took place. “’47” I heard. “Oh no! ‘45” was next. But as some of us might know, it was 1941, December 7. Then, “Does anyone know why Japan attacked the United States, and specifically Pearl Harbor?” Kahana asks. And honestly, now under pressure, we were all stumped. So, he began to explain to us…

Basically, Japan at the time wasn’t a democracy. It was an Empire, ruled by an Emperor. And they had been, for some time already, expanding. They had defeated China and Russia in armed conflicts. Japan had also annexed Korea, and were occupying Manchuria, by 1910. During WWI, as an ally of Great Britain, they had also taken control of Germany’s Pacific Islands. They wanted to continue their campaign, but Japan lacked the natural resources (oil) to sustain their movement, and so their answer to that was to gain control over what they called the Southern Resource Area, or Netherland’s East Indies, where it had an abundance of oil, tin, iron, and rubber.

Now the US had been supplying Japan with their oil for fuel, and without that, Japan’s advancement would be halted. America knew this, and so, they had moved their Fleet from America to the Pacific and stationed it at Pearl Harbor and embargoed oil bound for Japan. The US knew by placing their fleet in the Pacific that it could protect the assets of Southeast Asia, and keep control. But this ticked off Japan. So, basically Japan had the idea to take out the Pacific Fleet (stationed in Pearl Harbor), and while the US was busy repairing its fleet, they’d make their way to the South Pacific and have their way.

So, on December 7th, 1941, a Sunday morning, a Japanese fleet of 31 ships that had traveled undetected for around 4,000 miles, positioned itself approximately 200 miles off Oahu’s North Shore. Just before 8 o’clock that morning, its first wave of 183 planes ascended upon Oahu, Japan’s dive-bombers and Zero fighters bombed Wheeler Army Airfield and destroyed whatever they could (53 aircraft and killed 33 men). Torpedo bombers made their way into Pearl. They destroyed the aircraft lined-up wing-tip to wing-tip at Ewa Airfields, as well as Bellow’s and K-Bay (Kaneohe Naval Air station).

*Didn’t they have radar detection back then?” one might ask. And the answer is: yes, we did. But because there were US aircraft expected to land, they paid it no major attention, at least not as an attack.*

The island was well guarded with gun-turrets and batteries all along its coastlines, and pretty much ready for any normal, conventional naval attack, but wasn’t prepared for the naval air assault that it was enduring in this hour.

Approximately a half-hour after the first wave, the 167 aircraft-second-wave attacked from the East. But by this time, the US military was a little more ready, and could fight back and launch some fighters and gunfire, which brought down some of the attackers.

This attack killed more than 2,300 sailors, soldiers, airmen, Marines, and civilians. Close to 1,200, including civilians, were wounded. Five of the eight battleships in Pearl Harbor were sunk, for a total of 21 vessels either sunk or sustaining major damage. 164 aircraft destroyed and 159 were damaged. Japan’s Navy lost 55 airmen and 29 planes. One of the five known midget subs known to have been launched was captured and with it, one crew member, who was America’s first prisoner of war. 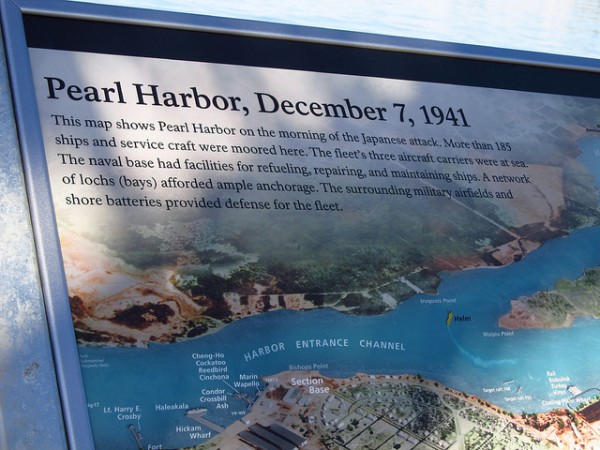 Though the havoc that was reeked was the worst in history on American soil, it wasn’t as bad as it could’ve been. Our submarine base was undamaged, as well as the reserves of oil and dry docks, so we could commence repairs. But even more important than that, the Pacific Fleet’s three aircraft carriers were not in port that day, and those were the deadliest weapons of the war in the Pacific.

Because this was mostly from memory, although I did get some of my facts from the handout I received there, I know I left some points and facts out, which I wish I could’ve covered, but wanted to stick more to the accuracies of what I learned. So, this is just a snapshot of my day at Pearl Harbor, and I should continue this after I jog my memory a little more, and do a little more research and another tour at Pearl Harbor, and that’ll be soon.

But as for the tour, it was great, and I highly recommend it to anyone interested in America’s and Hawai’i’s history. We did learn a lot, and saw some real landmarks and got some historical snapshots.

Hank, Julie, and Jocelyn got to go into the theater there, and watch the movie before the five of us got on the shuttle boat that carried us to the Arizona memorial. There we saw the names of all the sailors that lost their lives there. There was even one place that you could touch a part of the actual USS Arizona. It was touching. Both saddening and surreal, to imagine that happening right where we were standing. There were also some older vets there that day. It really drew out my respect for our military and what they do for us.

Again, to our military, mahalo nui loa for your service. Happiest of days to all the veterans, including my brother, my Papa, my cousins, my aunties and uncles, as well as my friends near and far.

We owe you. America owes you!

Also, be on the lookout for my next journal entry in the coming days and weeks, as we approach the anniversary of the attack on Pearl Harbor.

Also, if you’re a veteran, active enlisted, or even discharged, and are interested in knowing what benefits you have that can make your dream of living in Hawai’i and owning a home here a reality, please contact me.