Small-Town Charm on the Kohala Coast, Big Island of Hawaii

When referring to Hawaii’s Big Island, Kona and Hilo are popular hubs that instantly come to mind, but the island — the chain’s largest and youngest — features small towns along the Kohala Coast that offer tons of character and charm. Hawaii island’s small towns are begging to be discovered by local resort residents and visitors alike. 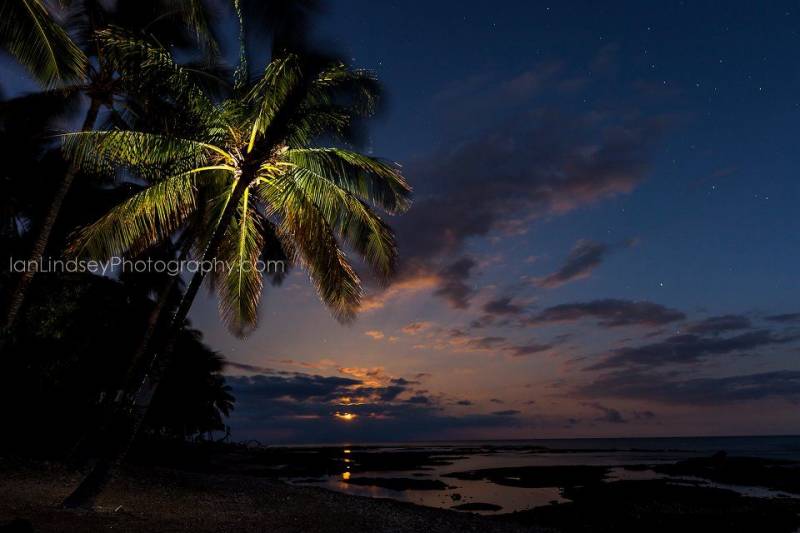 Residential resort communities with plenty of luxury options predominate the Kohala Coast, while up in Waimea, cattle ranchers live alongside scientists and astronomers from the observatories. With plenty of variety, it’s the small towns that draw many buyers to purchase a home along the Kohala Coast, with their many charms of old Hawaii. Well, that, and the sunset views, crystal clear waters, and white sand beaches.

It’s the small towns, crystal clear waters, and white sand beaches that draw many buyers to purchase a home on the Kohala coast.

When the island’s sugar industry slowed in the 1960s, many north shore plantation towns scattered between Kona and Hilo transformed into artsy villages that are bursting with reminders of old Hawai‘i. From farm-to-table restaurants to national historical sites, the Kohala Coast is brimming with charming villages, oceanside towns and quaint neighborhoods that showcase the spirit of Hawai‘i. These places help give meaning to Kohala, which is cherished land, and showcase the region’s deep roots in Hawaiian culture and connection to the ‘āina (land).

Dramatic black and red lava landscapes are the norm for people living in Kona-Kohala coast resort communities and those located further up the Big Island’s rugged north shore. Each of the small towns along the Kohala coast offers something for everyone, especially foodies searching for homegrown fare. Many restaurants feature uber-local ingredients like Parker Ranch beef, locally caught fresh seafood, and hearty vegetables grown in the island’s rich, volcanic soil, by local farmers.

There’s also an activity to suit any style, including history buffs looking to flex their muscles, adventure-junkies craving an adrenaline rush, or artsy folk hunting for beachy décor.

Here’s a guide for Hawaii Island residents looking to escape the grind over the weekend to explore these coastal gems, or for those looking for an off-the-beaten-path tour.

Puako is a small oceanfront community considered to be one of Hawaii’s best-kept secrets. A short drive from the bustling Mauna Lani Resort community, Puako is a mix of working-class homes, estates, and vacation rentals. It’s known for its glassy blue waters, so take a long walk along the shore, stopping to explore the many tide pools that are home to a wide variety of marine life. 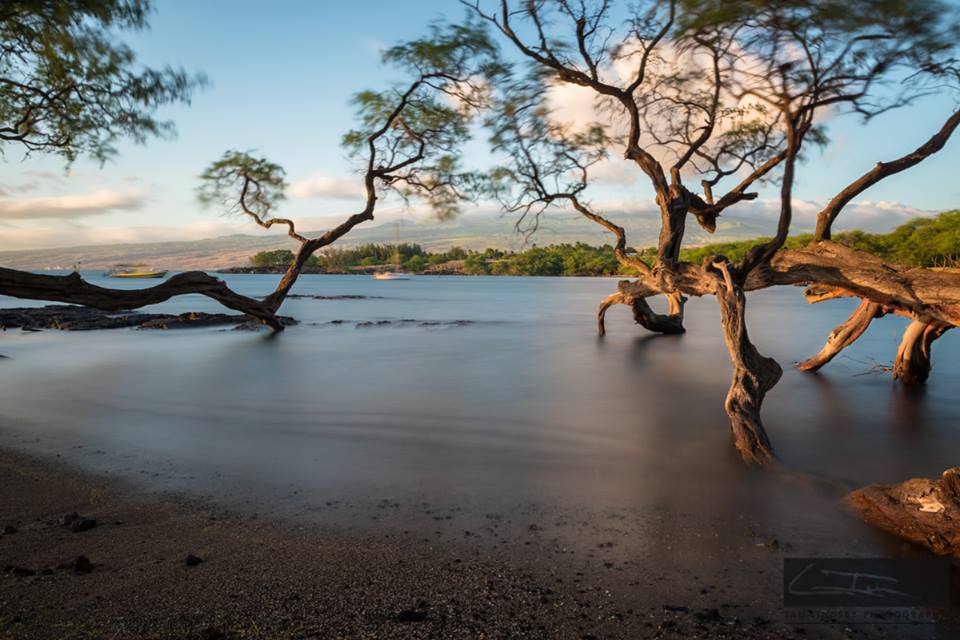 Many crave a closer look at Puako’s underwater residents. The community is one of the best nearshore scuba diving locations on the Big Island because of its many caverns and lava tubes that reef swimmers and divers can explore while snorkeling or scuba diving.

After toweling off, drive to the Puako Petroglyph Field, home to more than 3,000 mysterious ancient rock drawings carved into volcanic rocks. Visitors can access a section of 1,200 petroglyphs, including paddlers, sails, marchers, dancers, and family groups, as well as dog, chicken, turtle, and deity symbols. There’s no shade, so be sure to arrive in the early morning or late afternoon, when the temperature is cooler and the sun’s position casts shadows on the petroglyphs that allow you to snap the perfect picture. 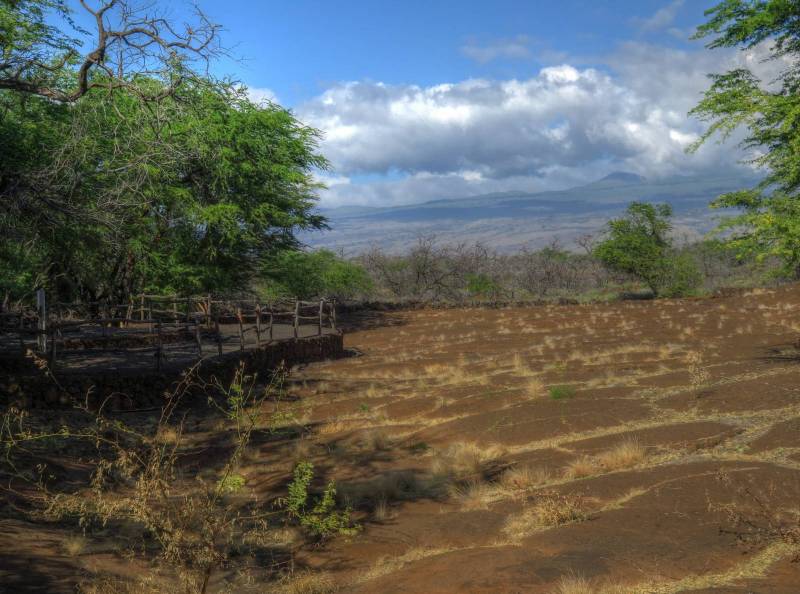 The Puako Petroglyph Field in Puako is home to more than 3,000 mysterious ancient rock drawings carved into volcanic rocks. Photo by David Grant via Flickr.

Continuing north towards Kawaihae, Hapuna Beach is a landmark white sand beach that’s regarded as one of the most dazzling on the island. Weather is likely to be amazing,  since it’s one of the driest parts of the Big Island, receiving only 10 inches of rain annually.

One of the largest harbors in Hawaii, the town of Kawaihae has a commercial feel, but there are still a few attractions worth seeing. The first is Pu’ukohola Heiau, an ancient war temple built by King Kamehameha that hosts a two-day Hawaiian Cultural Festival every August to celebrate local customs and traditions. 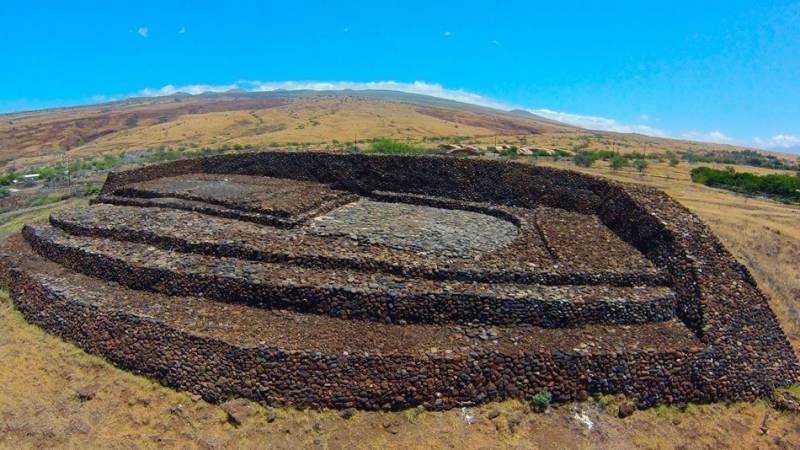 After rolling through Kawaihae, stop at Pua Mau Place, a stunning garden on side of Kohala Mountain just north of town. It features sculptures, stunning foliage, a hibiscus maze with more than 200 varieties of Hawai‘i’s signature flower, and large lava rocks.

After Kawaihae, take a short break from the beach and detour inland through pasturelands to the charming town of Waimea, where relaxed country living meets modern urban amenities. The largest town in North Kohala, downtown Waimea features fantastic farmers’ markets, shopping, schools, and restaurants, including the Big Island Brew Haus. Stop for brunch and a flight of local beer before moving onto to Parker Ranch. 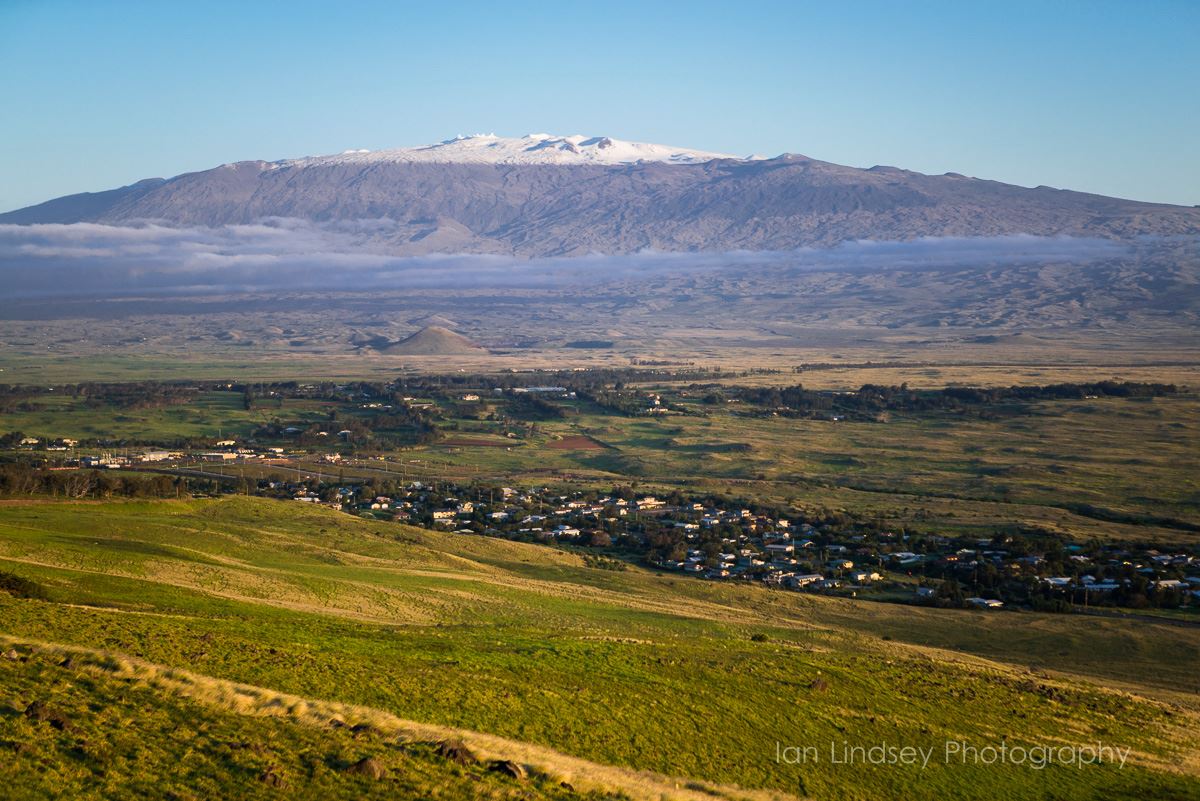 At the heart of paniolo country (paniolo is Hawaiian for cowboy), Waimea was built around Parker Ranch, Hawaii’s largest cattle rearing hub. History buffs should check out the Parker Ranch Museum and Parker Ranch Store.

Located in the uplands of the island — about 2,600 feet above sea level — Waimea is much cooler so you’ll need warmer clothes. On the upside, the unique combination of sun, rain, wet and dry means you’ll be treated to lots of rainbows in Waimea. 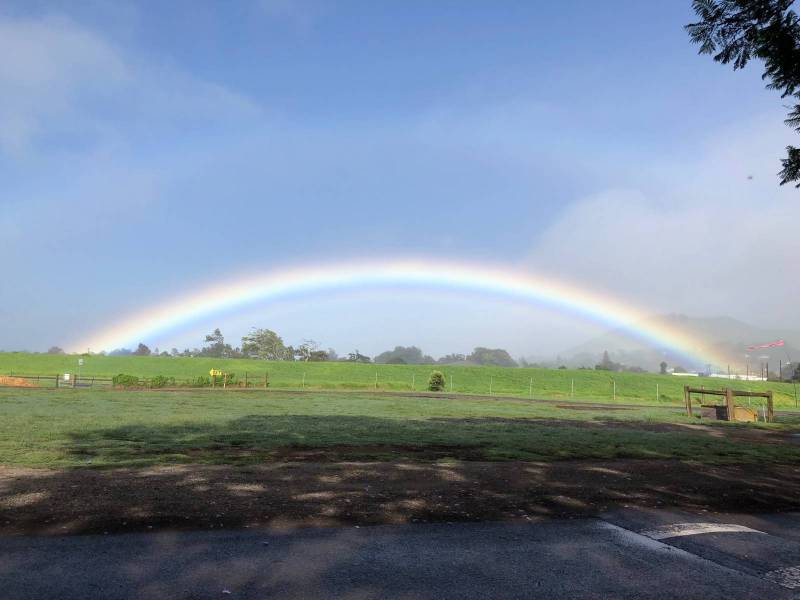 Waimea is cooler than the rest of the island, but you’ll see many rainbows.

Once you’ve had your fill of rainbows, drive north to the Big Island’s northernmost tip and you’ll find a peaceful haven called Hawi, known as North Kohala’s “biggest little town.” Once a bustling sugar plantation, the area was hit hard in the 1970s when the Kohala Sugar Company ended production, but Hawi is making a comeback with its picturesque charm, artsy vibe, and delicious dining options.

Many Hawi residents enjoy leisurely strolls through galleries, antique shops, and authentic restaurants, notably Sushi Rock and Trio that boasts the best sushi on the island, where guests can “taste the love.”

For those craving more than a stroll down the boardwalk, Hawi is also perfect for triathletes and those living ultra-active lifestyles. For this crowd, Hawi is a globally recognized location –  it’s the bicycle turnaround point at the annual IRONMAN™ World Championship, a 140.6-mile test of body, mind, and spirit held that attracts more than 2,000 athletes every October. Visit Hawi to cheer on competitors, or (those who qualify) can test their stamina with fellow athletes on the world stage. 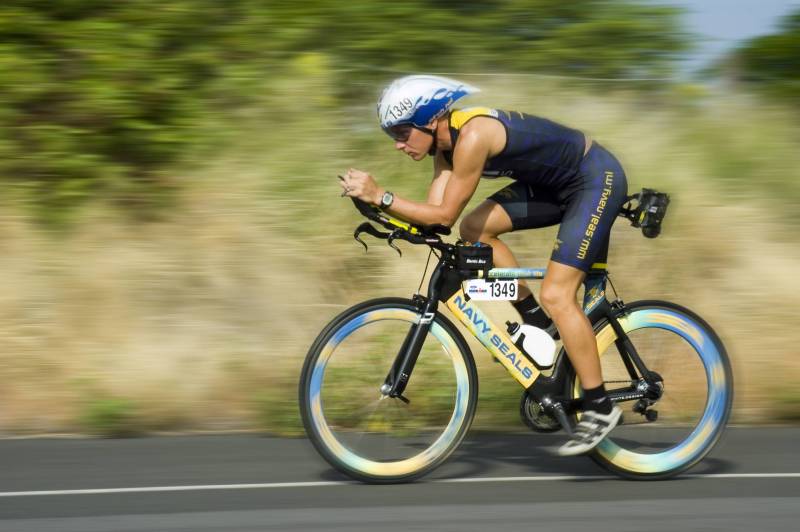 Hawi is the bicycle turnaround point at the annual IRONMAN™ World Championship. Photo by Marion Doss via Flickr.

A close neighbor of Hawi, Kapa‘au is a small town with tremendous historical significance in Hawaiian culture. Known as the birthplace of King Kamehameha the Great, Kapa‘au is home to the original statue of the celebrated leader who united the Hawaiian Islands in 1810.

Every spring the town honors the King with a parade, games and a lei-draping ceremony of the statue, which stands on the grounds of the former courthouse. 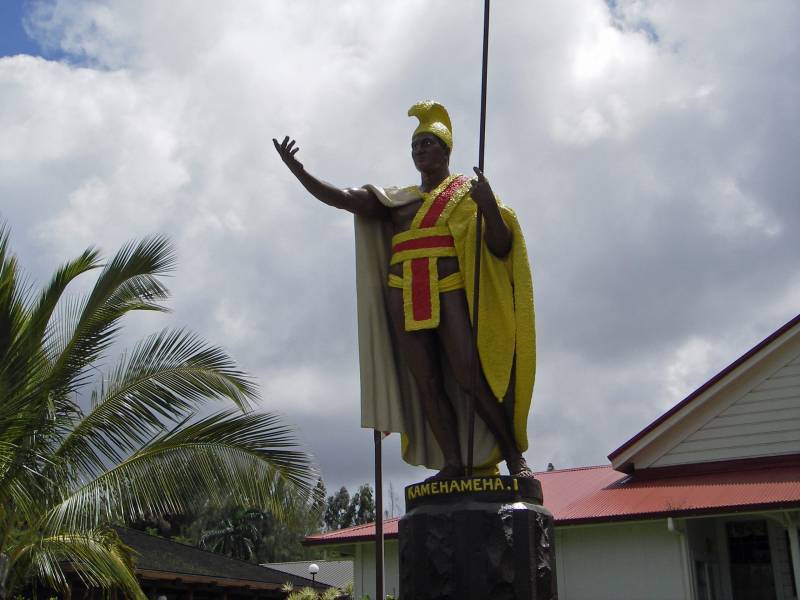 Kapa‘au is home to the original statue of King Kamehameha the Great. Photo by RDPixelShop via Flickr.

For more information about these Kohala Coast towns, please contact Carrie Nicholson,R(B), BIC at Carrie@hawaiilife.com or 808-896-9749.