Over the weekend, our Hawaii Life Haleiwa office debuted Shapes of the North Shore, a gallery exhibit of surfboards shaped by North Shore talents from Mokulēʻia to Lāʻie and Kahalu‘u. The exhibit was a tribute to their artistry, love for their craft and to the North Shore way of life.

The lineup included some big names in the surfing and shaping world, as well as some lesser-known, but up-and-coming shapers. 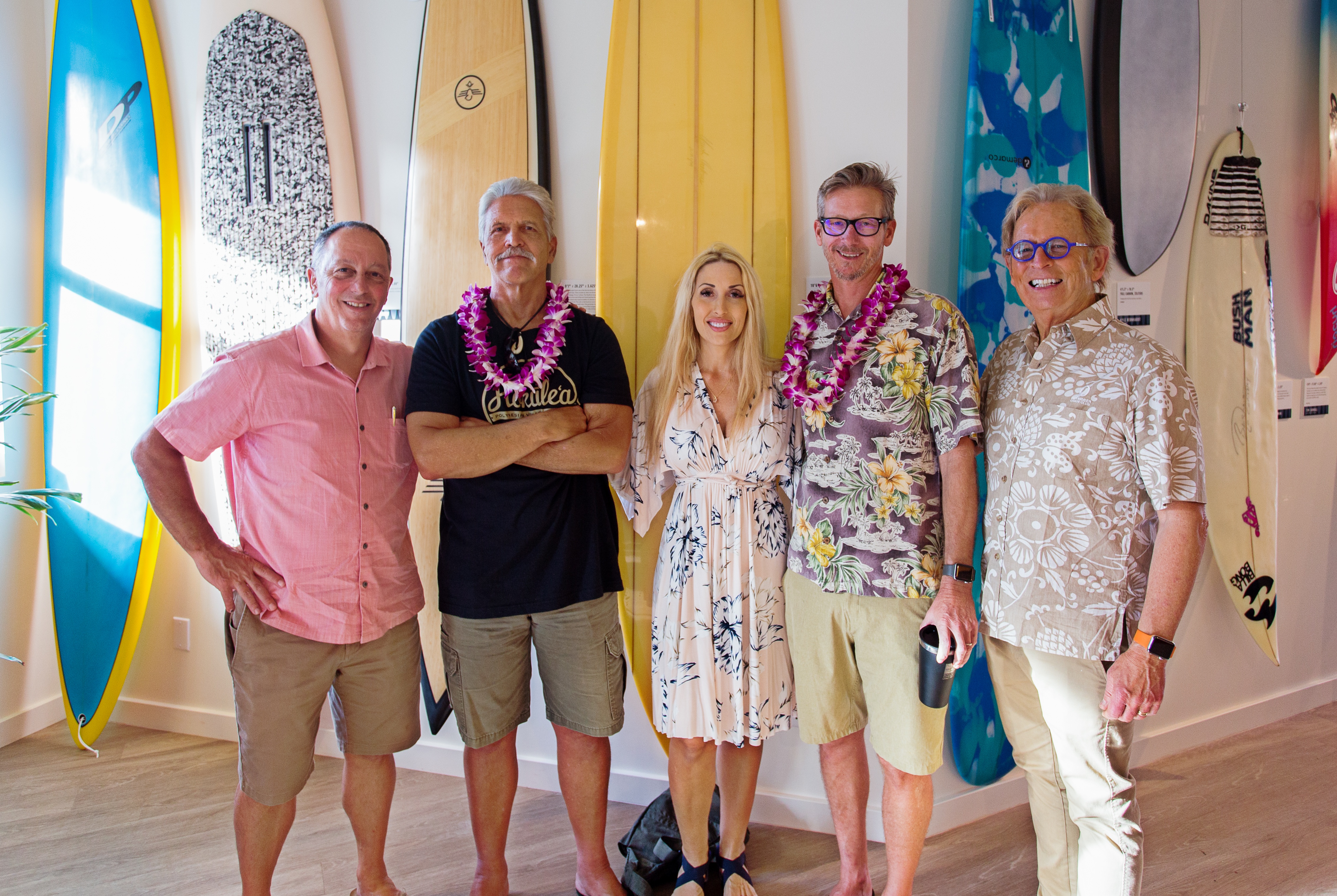 Curated by our Haleiwa art collective, the art opening was part of the monthly Haleiwa Art Walk, and one of many future such exhibits in the Hawaii Life Haleiwa office space.

“We had a stellar turnout,” said Diana Ricciutti, who serves as broker-in-charge at our Haleiwa office.

About 40 to 50 guests and eight of the 26 shapers on display attended the debut of the exhibit on Saturday evening. Even some of surfing’s elite made appearances, including Tom Caroll and Freddie Pattachia Jr. 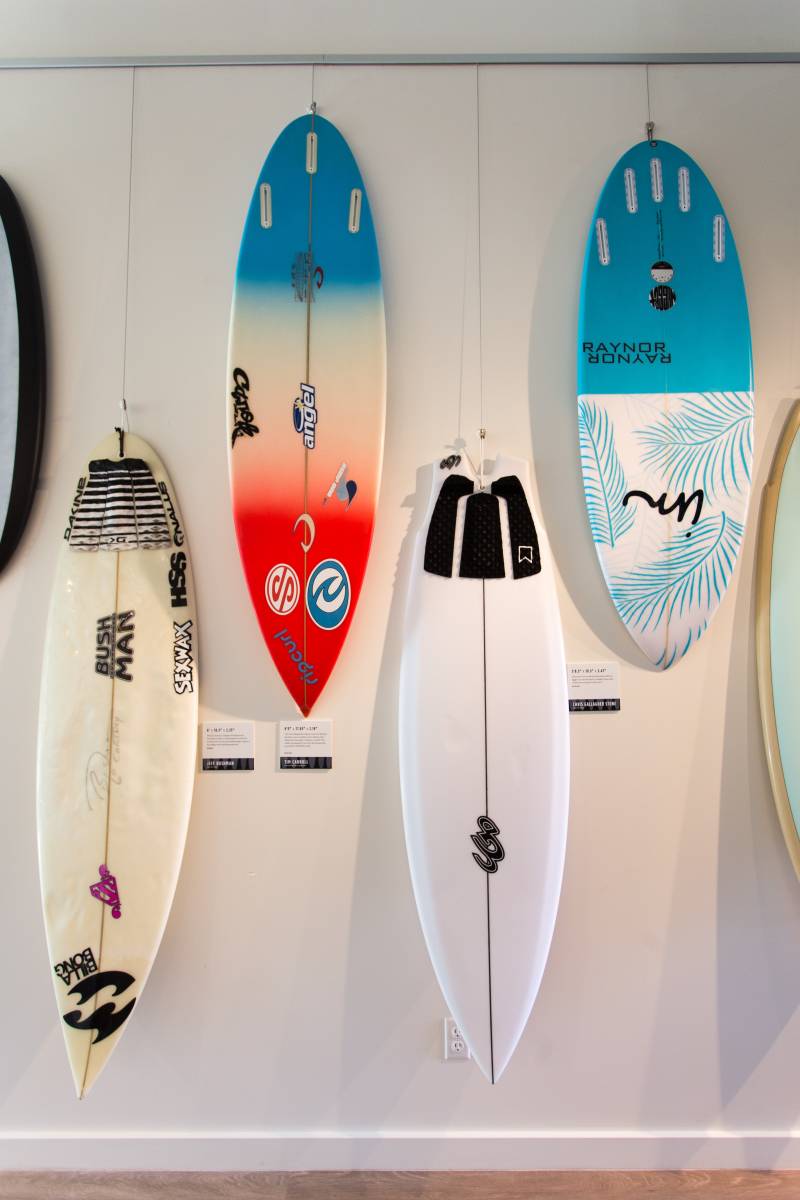 The evening was further enhanced with live music by a blues ensemble that included one of the shapers named Pat Rawson, on keyboards, who has been shaping boards since the 1960s and has a strong local presence on the North Shore.  They offered to play as a show of support to the shaping community.

Pat Rawson has a “show board” on exhibit that he collaborated on with well-known, local photographer, Clark Little. It has a  very unique shore break image on it, and will be on display, along with the rest of the curated collection of board, until the end of March.

Surfboards on display include a replica of the board Bethany Hamilton rode for the movie Soul Surfer, as well as a board used by current world champion Jon Jon Florence, and shaped by Jon Pyzel, his life-long sponsor and friend. 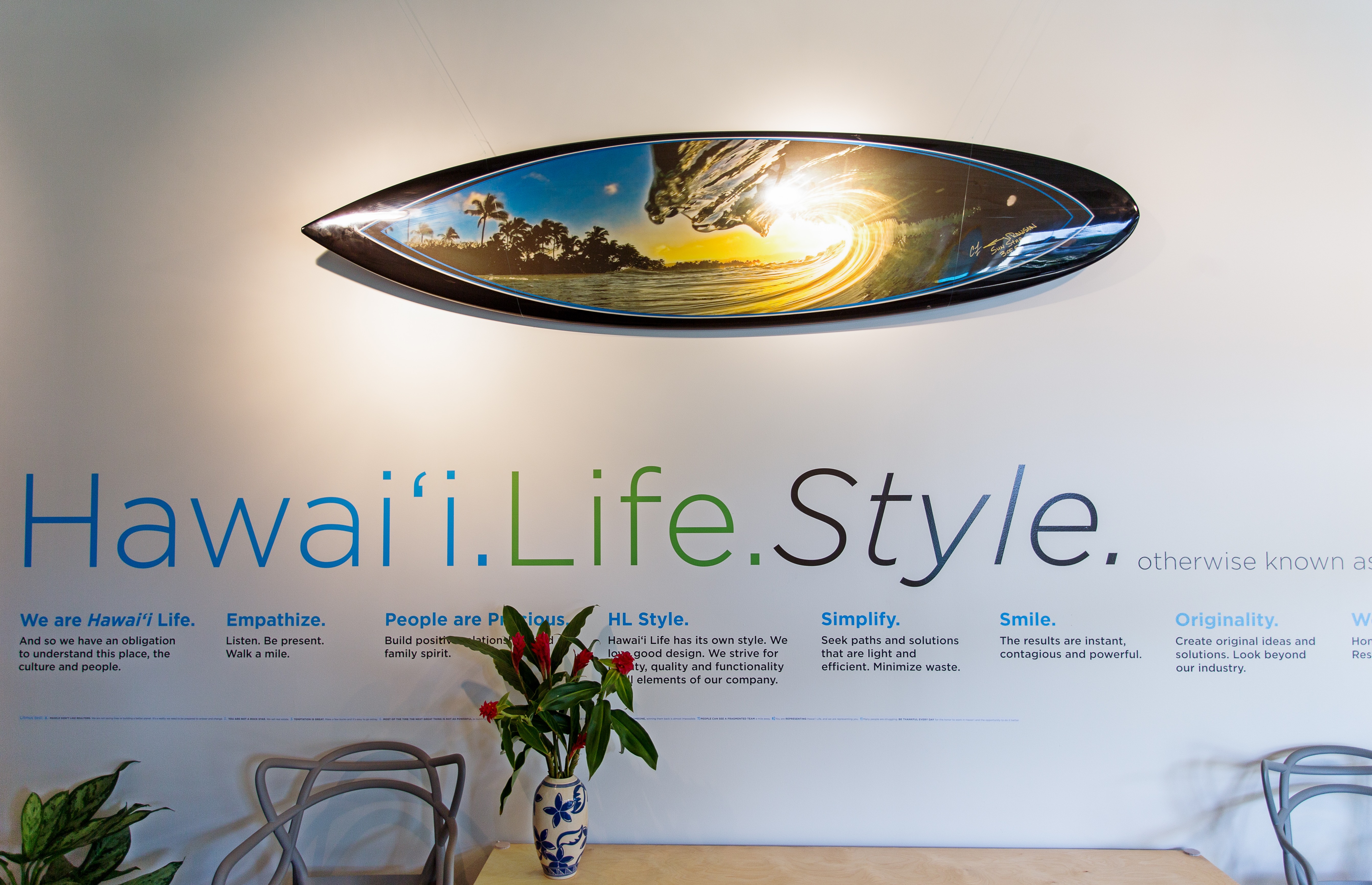 Other shapers who stopped by included Chuck Andrus, Dennis Pang, Drew Sparrow, Robin Johnson and Hawaii Life agent and board shaper Kyle Bernhardt, who said, “Fun night! I thought the blues music provided by Dan Berkery (guitar/vocals), Ian Chames (bass) and Pat Rawson (keyboard) was as authentic and colorful as the board display itself.” 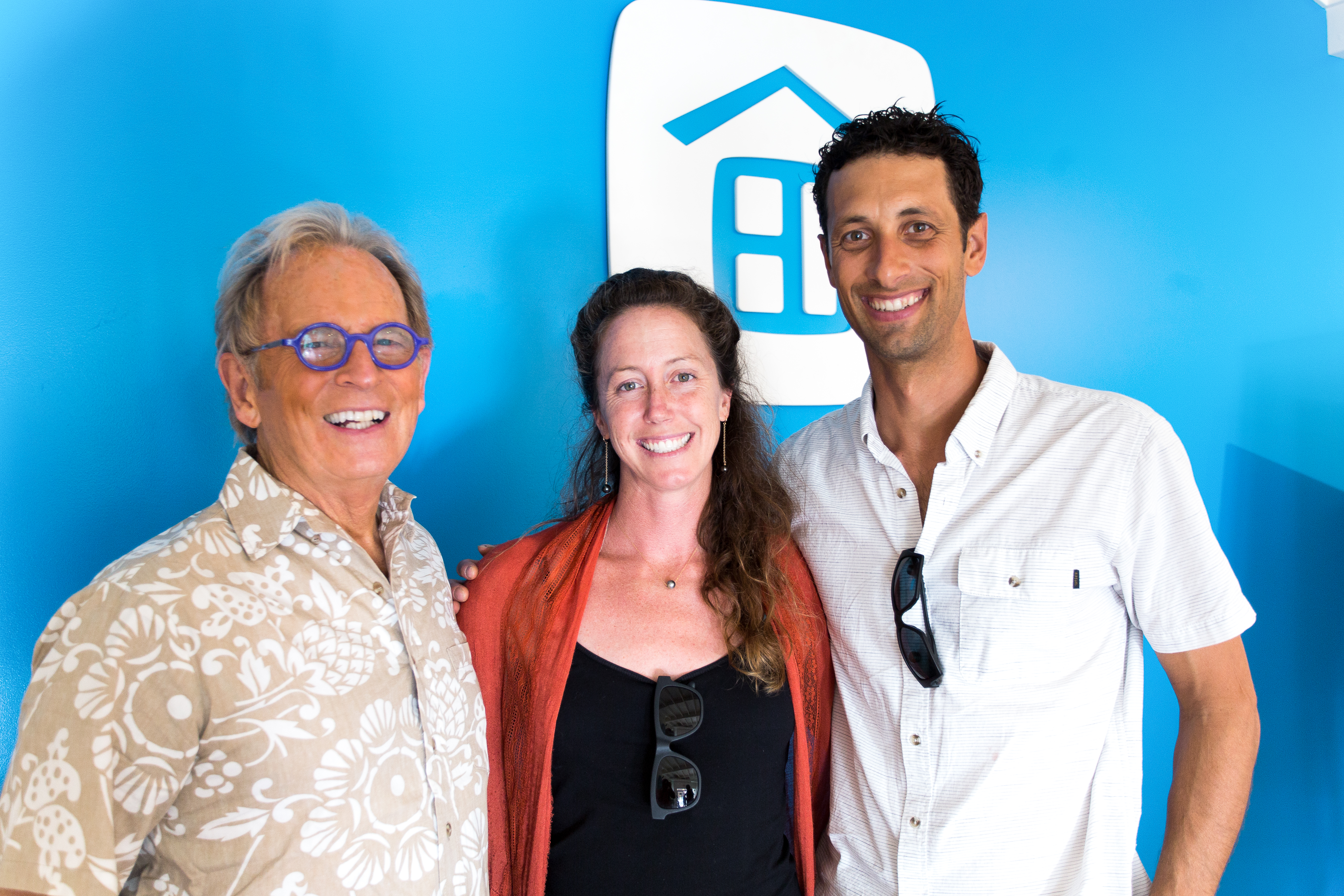 Look for Shapes of the North Shore in an upcoming issue of CIRE magazine. Zack Wright of Christie’s International Real Estate, no strange to Christie’s art exhibits, was also on island and turned out with our Haleiwa team for the event.

“Mahalo everyone for a fun and entertaining evening,” he said later. “I especially enjoyed connecting with the HL team and meeting so many new and interesting people; the shapers/artists, musicians, agents, spouses and kids. The music was phenomenal, being from “the era,” I speak with some authority.”

Oahu residents and visitors to the island who didn’t make it to this weekend’s art opening can visit our Hawaii Life Haleiwa office on the North Shore at: 62-594 Kamehameha Hwy #2 Haleiwa, HI 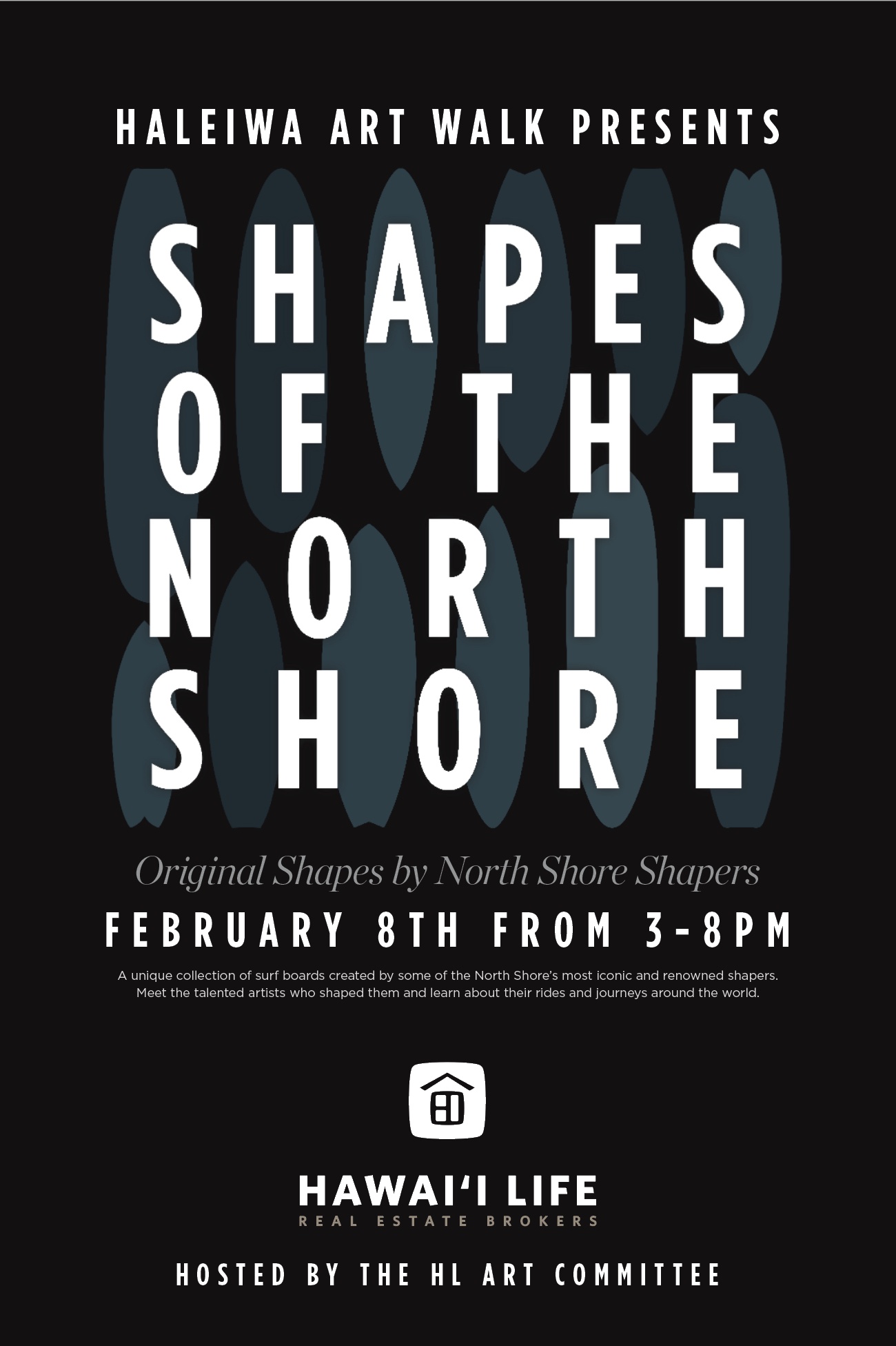 Now Is the Time—Your Last Chance To Bid! Have you been following our auction of 56-1089 Kamehameha Highway #2? Don’t …

Build Your Ideal Custom Home on 2.86 Acres  An opportunity not to be missed, create your own custom Hawaii home …