Koko Head Crater, also known as the Koko Head Stairs, is one of the most popular hikes in east Oahu. Every day visitors from around the world climb the vertical trail. At the top sits a dilapidated helipad, as well as a crumbling cement structure, which is a relic of Hawaii’s militarized past. Hikers are greeted by an incredible view at the top, where you are able to see far into the ocean past Sandy Beach and Hawaii Kai. On clear days, Molokai, and often times Maui, can be seen looming in the distance. It is for these reasons that the trail is as popular as it is. Nightly, hikers using lights to navigate the trail in the dark can be spotted from miles away, their flashlights illuminating the trail closely resembling the stars that sit in the sky above Koko Head’s peak. At the base is a sign posted by hikers which reads, “Save Koko Head Stairs!” 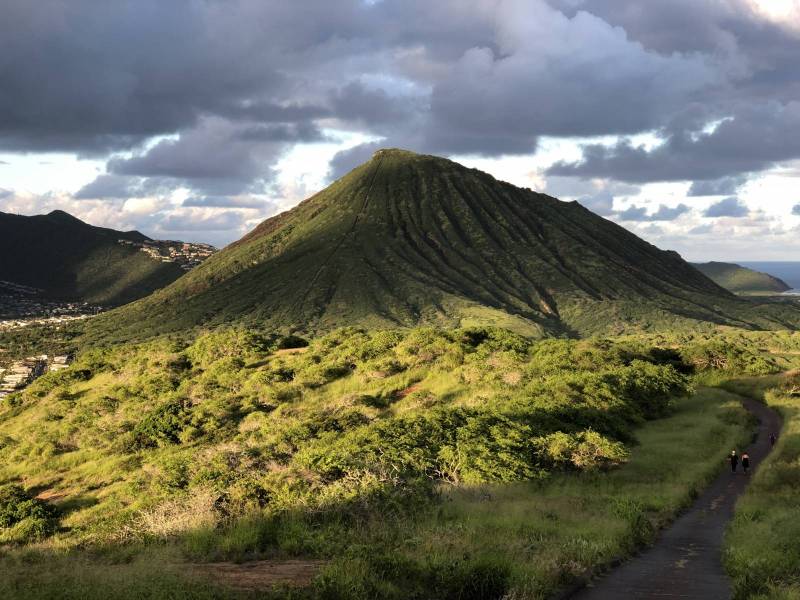 The foot traffic on Koko Head has left considerable damage to the trail over the years. In many places, the dirt is loose beneath your feet, ready to wash away due to even a little bit of rain. A petition expresses a desire for repairs to the trail. Repairs on Koko Head have always been done by hikers with the necessary skill and desire to fix the trail, never by the city or state. This is likely due to the fact that Koko Head is not a sanctioned hike. The “stairs” are actually what is left of a rail car track which was installed on the mountain during World War Two. Repairs haven’t been done since it’s decommissioning because the trail is not a staircase for hikers. The city of Honolulu made an attempt to close the hike; however, they were overwhelmed by the number of determined hikers, and it was left as is. Which begs the question, who should care for Koko Head stairs?

Hikers on Koko Head seem to have always been diligent about conserving their treasured hike. While hiking, it’s easy to notice the rail ties which look significantly newer than other rail ties, installed by hikers to replace ones that have deteriorated. At the top sits some trash bins which are regularly carried down and emptied, by volunteers, motivated only by their desire to see the mountain kept clean. Koko Head’s hikers have always taken responsibility for the mountain’s well being. It is for this reason that, for better or for worse, Koko Head’s hikers have the responsibility of caretakers as well.

Here is an opportunity that you won’t get to experience every day! The Hui Nalu Kaiwi Coast Run/Walk gives the …

Evening Activities on the Big Island

Hawaii is full of unique experiences that cannot be replicated anywhere else in the world. The Big Island offers a …

What Lies Clearly at Hand in Real Estate and in Life

Do you ever feel overwhelmed with the stuff of life? Discouraged? Weighed down? The noise and negative news coming at …