The North Shore of O‘ahu rightfully belongs on every traveller’s bucket list. To witness waves towering some 25 feet tall, then watch as they pound against the shore — it’s truly a sight to behold. Seeing the world’s best surfers gracefully carve a path through these moving mountains truly takes your breath away.

Let’s get our bearings here: the North Shore isn’t just one beach. It’s a seven-mile strip that runs from Haleiwa at the southern end to sweeping Waimea Bay further north. It is home to the world-renowned Banzai Pipeline, but also to an array of gorgeous, white sand beaches that are perfect for sunbathing.

Winter’s huge surfing waves are generated from winter swells coming from the north, which kick up as they sweep powerfully over the layers of reef. Because the reefs there are cavernous, as the swell hits them, air bubbles are sent to the top, developing the picture perfect crest that big wave surfers love to ride. It’s the perfect combination for big wave surfing, making O‘ahu’s North Shore a mecca for big wave riders from around the world. 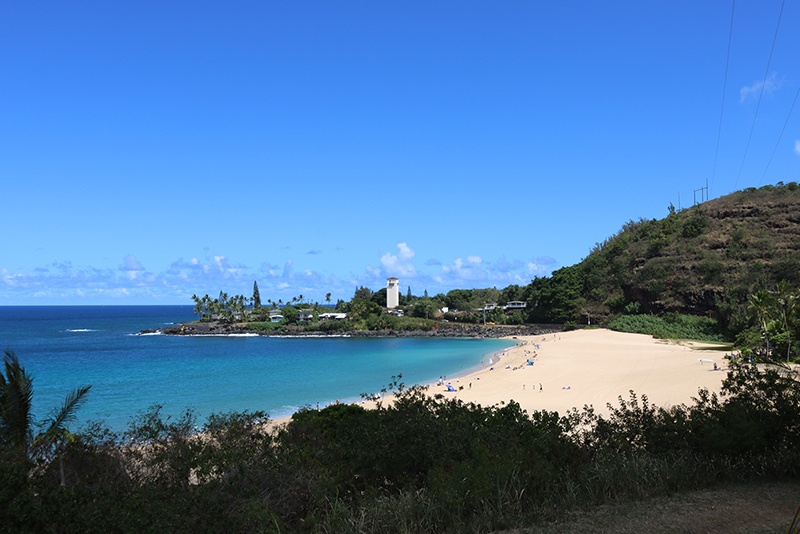 What many people don’t realize is that the North Shore has another side to her, a very calm and peaceful vibe in the summer months, when this same dramatic wintertime ocean coyly takes on a demure, lake-like demeanor. This is the winter versus the summer on O‘ahu.

To see Mother Nature in her most powerful majesty, you’ll want to visit during the winter swells. During the summer months, the big surf (though not nearly as massive) moves around to the South Shore of the island. Summer months on the North Shore of O‘ahu tend to be much calmer and lend themselves well to family outings, beach picnics, and summer splashing.

When is Big Wave Season?

Of course, no one can control Mother Nature, but in general, winter swells and big waves start hitting the beaches in November and continue pounding the North Shore through February. There are three reefs layers, with the waves getting bigger as you swim farther from the shoreline. This is where the daring (and very experienced) get towed in with jet skis and say a prayer to the surf gods for safe passage.

Probably the most widely known professional surf event is the Billabong Pipe Masters, where the pros surf like gods, appearing as mere specs amidst the behemoth waves that appear at that time of year. The best in the world come to compete and their performances are nothing short of spectacular.  Even if you’re not a surfer, it’s worth it just to watch their supernatural feats of athleticism. 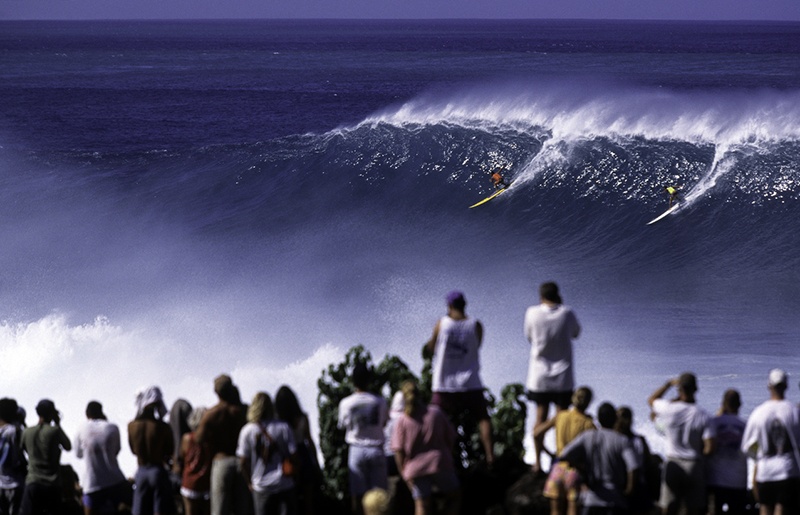 Can Anyone Surf The North Shore?

For newbie or novice surfers, winter on the North Shore is not the time or the place to learn. Even the most experienced watermen in the world sometimes find themselves in peril during peak wave season. Lifeguards monitor shorelines for the inexperienced tourist standing at the water’s edge, thinking that it’s safe. The size of the waves, along with the very powerful undertow, often pulls people off the shore in the blink of an eye, forcing many dramatic rescues each year. In the winter months, more novice surfers can have a great time on the South Shore in Waikiki and beyond, where the waves are more manageable.

Surf schools are found along the entire stretch of the North Shore, with vans parked along Kamehameha Highway. For those seeking to learn, you’ll want calmer ocean days that include not just smaller waves, but also more mellow currents. Even in the off-season (outside of November through February) there is still enough power in the 3-5 foot swells for a new surfer to get a thrill and learn a lot. Yep, we’re going to say it, “Safety first!”

Summer is the Season for Easy Surfing, Swimming, Snorkeling & Diving

With the winter swell calming down in February, you will still find larger surf on the North Shore through May. From May through September, the North Shore transforms into a much calmer atmosphere for locals and tourists to enjoy other activities in the water. Waimea Bay transforms from a popular spot for watching huge surf to a playful beach where you can climb the bay’s large boulder and jump from the precipice into the crystal blue water below. Give it your best cannonball for those on the beach keeping track of whose splash goes the highest. 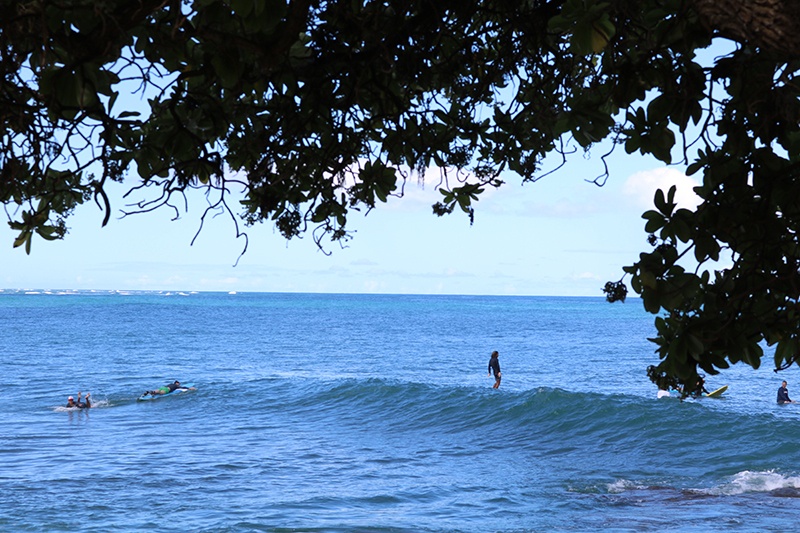 Surfer coasts back out to the break on the backside of an easy wave at Turtle Bay Resort in summertime.

Back in Haleiwa town,  most surf and paddleboard lessons become crowded at this time of year, and snorkelers are floating over the reef gazing at sea life, large and small. Colorful tropical fish such as parrotfish, Moorish idols, tangs and much more are abundant in the area. Bonus points from the locals if you see (and can say) the name of the Hawaiian state fish: humuhumunukunukuāpua’a. Yes that is a long name for a tiny little triggerfish. Local fishing and diving charters do a brisk business out of Haleiwa at this time of year. 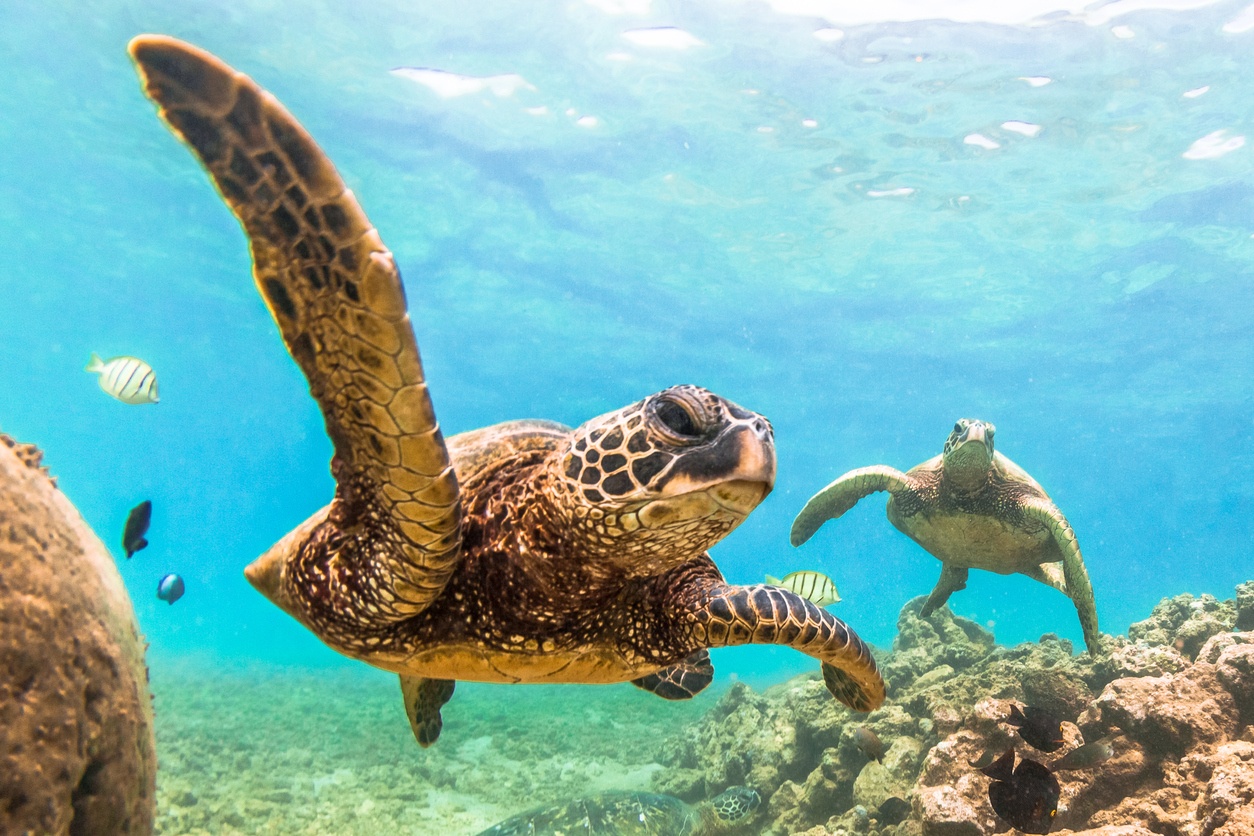 When combing the North Shore beaches, keep an eye out for green sea turtles. These are revered and protected in the islands. Called honu locally,  this endangered species is both curious and friendly. But please don’t touch them while in the water or if you find them sunning on the sand. It is a crime and comes with hefty fines and potential jail time. The same is true if you happen upon a monk seal, which is also an endangered species — take pictures from a safe distance and just let them be.

For more recommendations, you can reach out to our team members at the Hawaii Life North Shore office, who all live and work on the North Shore. They’d be happy to share with you the best turtle spotting beaches, their favorite summer and winter waves to ride, where to snorkel or stop for pau hana.  You can reach them at 800-370-3848.

Thanks to Maui’s ideal climate and fertile soil, we’re fortunate enough to have farms on every part of the island, …

Aloha friends!  Festivals, parades, and lots of music happening this weekend on Maui. Festivals of Aloha will be in Hana …