Next Chapter in the Hawi Oceanfront Home Story

It has been a little over a year since I reported the sale of the Hawi oceanfront home that had gone to foreclosure, and I still get inquiries off this blog post: Hawi Oceanfront Home Sold.

The next chapter in this home’s story has just opened, with the release of a new listing on the Pahoa Beach Estates property, which consists of a home of almost 10,000 sq. ft. on 20 acres of oceanfront land. 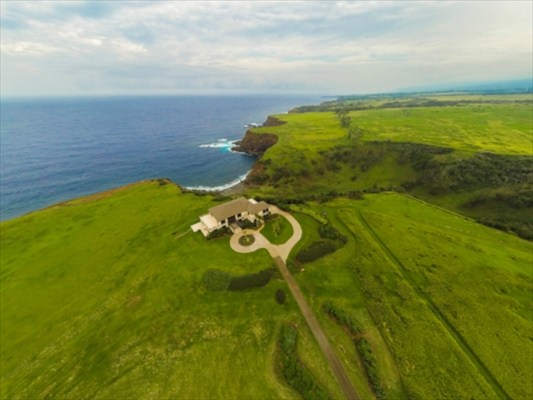 A Year of Renovations on a Distinctive Oceanfront Property

Recalling this then-bank-owned property sold in December 2012 for $1,195,000…you may be asking yourself what’s been done in the past fourteen months to create $7 million in value? 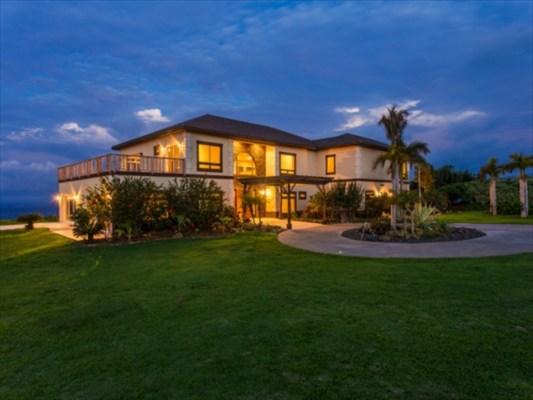 The most obvious improvements to marketability are perhaps cosmetic rather than fundamental, but were time-consuming. The exterior has gone from a style that would have been perfectly at home in Honolulu’s business district, to a bit more discreet stucco that is reminiscent of the Mediterranean, or at least Montecito.

This involved a team of workers first removing the red granite exterior (my dog monitored progress on our daily walks and snapped this photo): 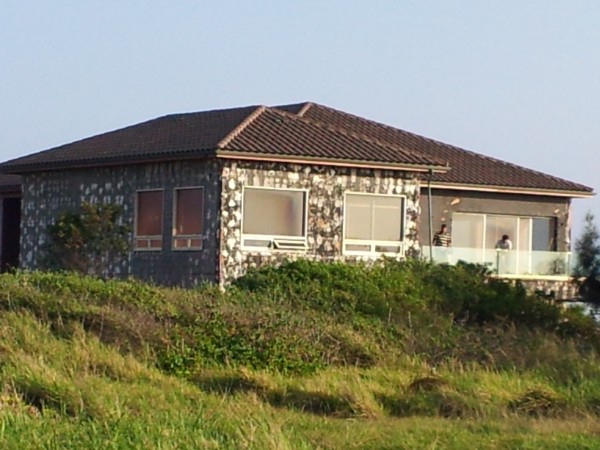 A new, more gracious entry was created with landscaping, lava rock walls, and a portico: 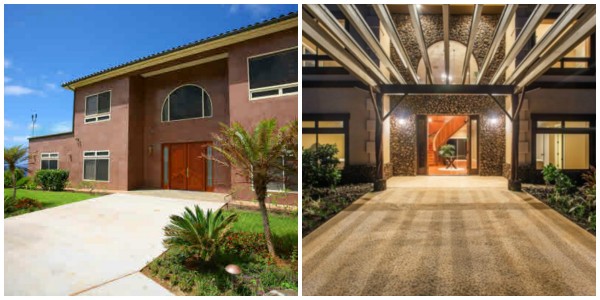 Interior was repainted in neutral colors, crystal chandeliers replaced with more contemporary light fixtures, and the home staged so the spaces don’t overwhelm: 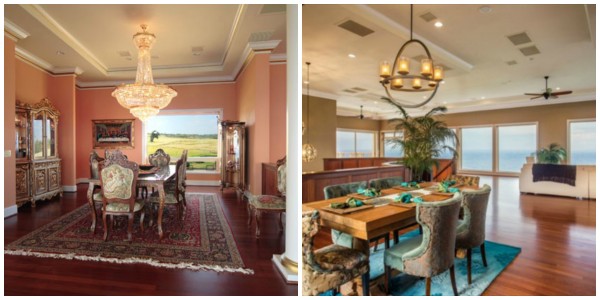 With a REO (foreclosure), sold As Is, there is always a question whether fixtures and appliances are in good working order. Even the hot tub and the elevator have been checked out and repairs made as needed.

The “Where Is” Question: How Was the Encroachment Issue Resolved?

Readers who went back to my earlier blog posts will recall that even at a $2 million price point, prospective buyers were leery of buying this oceanfront bargain because the home was built when the original owner had both the oceanfront lot and the adjacent one.

The adjacent lot was sold with an encroachment agreement because a big chunk of the house actually sat on the other parcel. That would seem to solve the “where is” except…

…the deeded shoreline public access runs along the boundary between the two parcels. In other words, I should have been walking my dog right over the top of the garage.

Signage went up indicating a lot line adjustment (technically a consolidation and resubdivision of the two lots) was in progress. The corner where the house encroached now belongs to the same parcel as the rest of the home; and a corresponding triangle near the entrance was traded to the mauka parcel, with a prohibition against building there.

Re-reading my June 2012 blog post, it appears the new investor owners pretty much followed the playbook in that post. Most $8 million oceanfront buyers would expect a pool, but that can be added.

What can’t be changed are the location and orientation of the home…for better or for worse.

Are There Comparable Properties for an $8 Million Oceanfront Home in Hawi?

Whatever the value of the tangible and intangible improvements, the real question for an oceanfront buyer is whether this property is priced right relative to the comps.

There is only one other oceanfront property of similar square footage and acreage in the “neighborhood” broadly defined, a home with pool, tennis court, and guest house at Puakea Bay Ranch offered for $11,950,000 (MLS# 232548) (and I was wrong in thinking it would sell last season).

If neither of these homes is your style, here’s the alternative. Just to the West of the Pahoa Beach Estate home, in fact…bumping right up to the lots available in that community, is a newly released oceanfront parcel of 41 acres offered for $3,750,000. 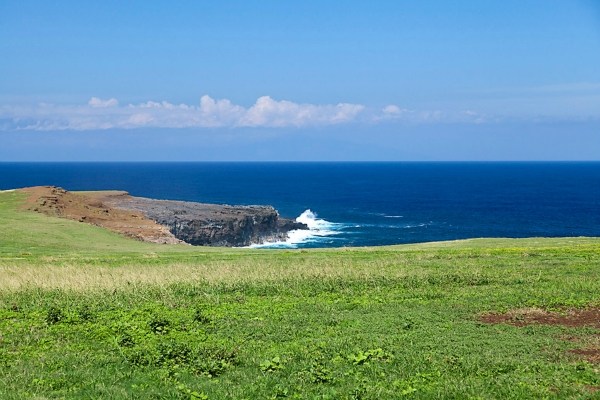 Looks to me like one could purchase this oceanfront land, and build a home of similar square footage with greater acreage, privacy, and character, for less than the asking price of the Pahoa Beach Estates listing. In fact, this new land listing actually consists of two ‘condo’ lots, meaning two homes could probably be built.

Thank you Beth, a very informative update. I look forward to what the next chapter holds on this properly….it ain’t over till its over.

Thank you Beth, a very informative update. I look forward to what the next chapter holds on this properly….it ain’t over till its over.

Thank you, Julie! And this morning I discovered another wrinkle in the “AS IS/WHERE IS” story. As you say, it ain’t over! But saving that story for folks who contact me with interest 🙂

Thank you, Julie! And this morning I discovered another wrinkle in the “AS IS/WHERE IS” story. As you say, it ain’t over! But saving that story for folks who contact me with interest 🙂