The Laysan Albatross on Kauai – A True Bird of Paradise

Spotting these Albatross the other day led me to explore a bit more about these majestic creatures of flight. Here’s a bit of what I found out…

Known mostly for living on the uninhabited (by humans) Northwestern Hawaiian Islands, in the past couple decades, a small amount of Laysan Albatross have used their six-foot wingspan and migrated southeast to try out the Garden Island as a new nesting area. 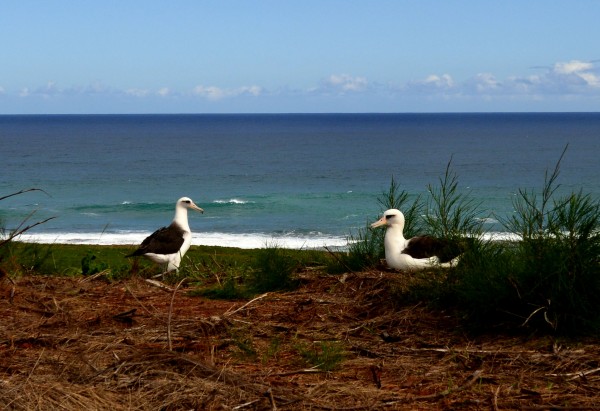 Two Albatross, silently speaking a language of their own

Since their migration they’ve grown extremely comfortable on Kauai, settling near several residential areas on the North Shore and building nests out of vegetation. Though the majority of Albatross on Kauai live near the Kilauea Lighthouse in the Kilauea Point Wildlife Refuge — which is operated by the U.S. Fish and Wildlife Service — others can be seen scattered throughout Princeville and on both the Prince and the Makai Golf Courses.

While they spend most of their lives soaring over the vast Pacific Ocean, fishing and sleeping on the water, they must return to land to lay their eggs and thus we get to observe them up close.

The Albatross Mating Dance and a Chick’s Fledging

One of the most exciting things for any lucky passersby to witness is their elaborate ‘mating dance’, which has up to 25 ritualized movements and can look more like the precursor to a brawl than an act of wooing. But evidently this dramatic courtship is all worth the effort because once these birds find a mate they keep them for life. A great place to see this up close is on the Makai Golf Course, where several couples have taken residence.

Once a chick is old enough they embark on a fledging, a 3-5 year journey over the ocean that can take them as far as 5,000 miles away. This voyage starts with the ultimate leap of faith — jumping off a 150 ft. cliff and hoping they’re innate abilities help get them off to a flying start, literally.

The oldest known Albatross is “Wisdom,” who is 62 years old, lives on Midway Island, and was seen as recently as 2011 giving birth to a new chick.