Over the next several weeks, I will be writing about the various Real Estate Developments located in the Mauna Kea Resort area. Before I started that series, I thought I would share some history about how this area was chosen as the site of the iconic Mauna Kea Beach Hotel.

Along with a friend of mine, who also loves local history, we put together the story of:

It had all the ingredients of a good John le Carré Cold War spy story.

A billionaire businessman pressed into service to the president of the United States himself. With their true objective known only to his handlers, their unsuspecting agent embarks on his mission for the president.

The plan seems doomed as time runs out but a fateful discovery from the window of his private plane provides a clue. He is drawn to investigate only to fall under the mesmerizing spell of beautiful but unlikely heroine.

Hawaii was at the dawn of statehood. Tourism was the hottest game in town. As the Boeing 707 ushered in the age of affordable jet travel, what had started as a trickle had become a tsunami of daily arrivals ready to experience this new and exotic destination. The timing was fortunate. By 1960 the sugar industry was already in steep decline. Plantation owners had a choice: either ride the agricultural economy to the bottom or look for ways to cash in on the new crop: droves of winter-weary visitors.

As development began to crowd into places like Waikiki, the newly elected first governor of Hawaii, William Quinn and his right-hand man, George Mason, embarked on a bold plan. As head of Hawaii’s Department of Economic Development, Mason had surveyed the islands looking for a dramatic setting in which to build a new and impressive resort hotel. Their vision was to position Hawaii as the premier luxury resort destination in the world. This new Hawaii would be a playground for celebrities, a refuge for the wealthy and establish the islands as the must-see destination for the newly anointed Jet Set.

The Kohala Coast was not a natural choice to put a luxury hotel. Accessible only by hiking trail or an hour and a half of bumpy dirt road over private land, the location had significant infrastructure and access issues. Even the sunny skies, sweeping landscapes and stark beauty that would eventually make Kohala famous were not for everyone.

In 1819, Rose de Freycinet, the young wife of a French naval captain described the area in her journal. “Nobody can ever have seen a more arid and dreadful aspect than this part of the Island” she wrote. Even Parker Ranch owner Richard Smart remarked on the areas inhospitable nature. Upon agreeing to a 99-year lease of 500 oceanfront acres for the new hotel, Smart remarked, “It’s on land the cows don’t like, but the tourists love – hot and barren.”

To succeed with their plan, Quinn and Mason needed an accomplice. The target was Laurance S. Rockefeller, grandson of America’s first billionaire, John D. Rockefeller. By all accounts, LSR had the right connections, almost unlimited access to funds and a track record as a shrewd and resourceful developer. However, they first had to be sure.

The potential for establishing a remote location as a premier luxury travel destination had already proven. Caneel Bay on the island of St. John in the US Virgin Islands had been purchased by Rockefeller in 1952 along with most of the island. His resort, designed around complimenting and enhancing the natural surroundings, opened in 1956 and became an instant success. While the resort attracted an international “who’s who” of wealth and fame, most of the land surrounding the resort was donated to create the Virgin Islands National Park.

To confirm their plans potential, Mason traveled to Caneel Bay to see for himself. As well as touring the property Mason had a series of lengthy discussions with hotel manager Leslie H. Moore Jr. During their time together Mason grilled Moore on every detail and challenge involved in operating a luxury property in what was arguably the middle of nowhere. Satisfied they were on the right track he returned to Hawaii and set the wheels in motion to bring Rockefeller to Hawaii.

A Cover Story for the Press

A plausible cover story for a visit came in the guise of an official survey. Rockefeller’s growing reputation as an environmentalist and visionary resort developer had landed him an appointment as head of President Eisenhower’s Committee on Outdoor Recreation Resources. The press announced the purpose of the visit was to assess the outdoor recreational needs of the state. Only Quinn and Mason knew the real reason for the visit was to scout possible investment opportunities. The minor misdirection was intended primarily to discourage speculators but also to encourage open communications between Rockefeller and local visitor industry insiders. 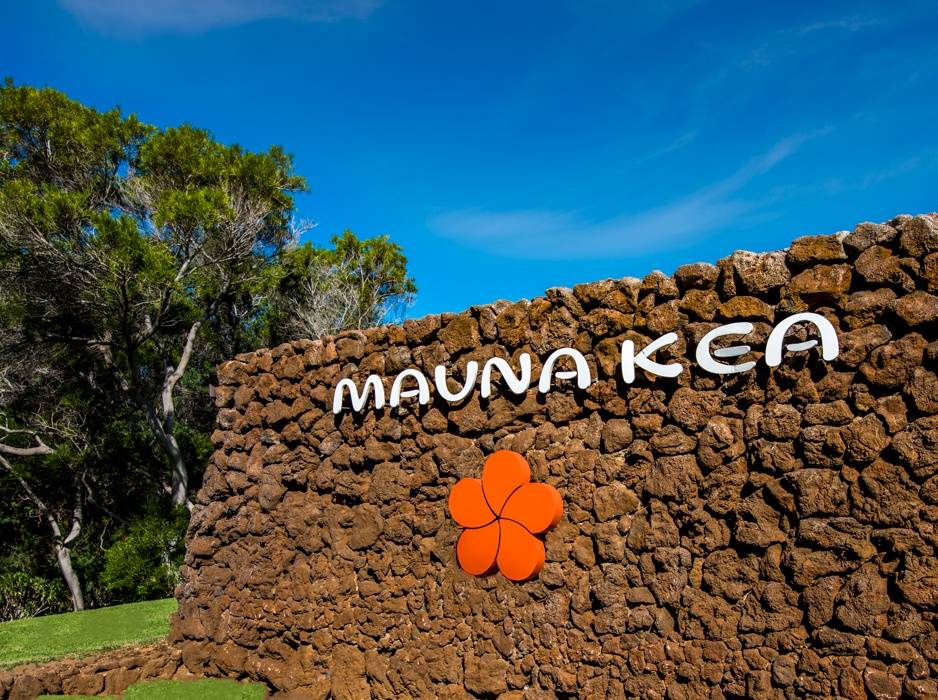 Taking a page from the CIA U-2 playbook Governor Quinn arranged for Rockefeller and his family the use of a new Fokker F-27 Friendship for the entire 12-days of their visit. The plane was secured on favorable terms through a lease agreement between Aloha Airlines and the State of Hawaii. As well as enjoying fast and comfortable transportation between the islands, Rockefeller was able to get a birds-eye view of every potential development site identified in Mason’s statewide survey from the previous year.

It was on one of the last days of the trip while flying over a particularly remote stretch of Big Island coastline that Rockefeller spotted the site for what would become his masterpiece. At the foot of towering Mauna Kea lay two broad crescents of white sand separated by a rocky headland. Rockefeller was mesmerized.

Up until that time the twin jewels of Kaunaʻoa and Hapuna beach tucked into the foot of Mauna Kea were virtually unknown. Located on private land belonging to the massive Parker Ranch, access was usually restricted to ranch employees. Ranch hands and their families would travel the bumpy unpaved road from Waimea to picnic, fish and play in the surf. After landing in Hilo and traveling to Waimea as the guest of Parker Ranch owner Richard Smart, Rockefeller asked to visit the spot he had seen from the air.

Floating in the warm clear waters of Kaunaʻoa Bay, Rockefeller marveled at being able to gaze across the immense flank of the volcano to the snowcapped summit some 13,803 feet above. The feeling of being cradled in a luxurious oasis in the midst of such raw natural beauty, he rightly surmised, would be an irresistible magnet for the well-heeled guests he would welcome to his hotel. There were still many challenges ahead, but Rockefeller was smitten. In a letter to Governor Quinn dated January 31, 1961, Rockefeller revealed his plans to build a hotel on the site he had visited the previous summer.

The story of the Mauna Kea Hotel had begun. It would open in 1965 to immediate worldwide acclaim. As well as establishing the Big Island as a world-class visitor destination the Mauna Kea would prove a catalyst for future development of the entire Kohala Coast. For Quinn and Mason, it was mission accomplished.

The Mauna Kea Hotel is peaceful and relaxing. If you want to slow down and set your time to island time, then this is the place to be. Kailua-Kona is only thirty minutes away.