According to the U.S. Housing and Urban Development and Commerce Department, total housing starts (the number of privately owned new houses on which construction has been started) rose 1.9% from August to September 2020—in comparison to 11.1% in September of last year.

“The housing market remains a bright spot in the U.S. economy, and this is reflected in today’s positive housing starts report,” said Chuck Fowke, Chairman of the National Association of Home Builders (NAHB) and a custom home builder from Tampa, Florida. “Builder confidence is at an all-time high as buyer traffic is strong—another sign that housing is helping to lift the economy.”

Low interest rates are boosting demand in the housing market, resulting in an increase in mortgage applications. Analysts believe that support from the Federal Reserve is keeping rates at such modest levels. The housing market is also steadily benefiting from the changing preferences of a large chunk of the population, as people are increasingly looking for work-from-home friendly properties. 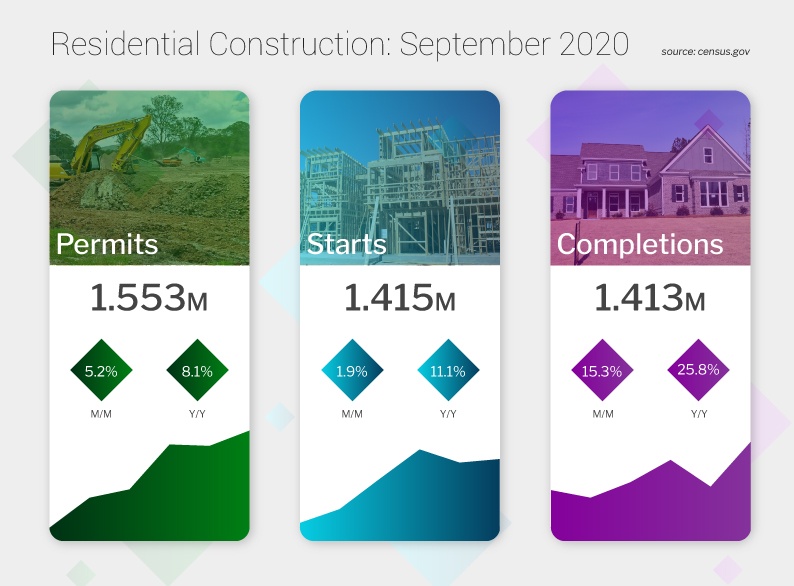 According to the latest NAHB/Wells Fargo Housing Market Index (HMI), builder confidence in the market for newly-built single-family homes increased five points to hit an all-time high of 83 in September and again rose from 83 to 85 in October 2020—marking the second month in a row that it has set a record high.

Current sales conditions rose 2 points to 90, sales expectations in the next six months are up 3 points to 88, and buyer traffic remains unchangedat 74.

“Historic traffic numbers have builders seeing positive market conditions, but many in the industry are worried about rising costs and delays for building materials, especially lumber,” said NAHB Chairman Chuck Fowke. “More domestic lumber production or tariff relief is needed to avoid a slowdown in the market in the coming months.”

Existing Home Sales came in strong in September, up 9.4% from August. This report measures closings, which means it likely represents buyers who were shopping for homes in June and July.

The median home price was reported at $311,800, up almost 15% year over year. Note that this doesn’t mean homes are not affordable. It just means the middle-priced home that sold was $311,800, with half the homes selling below and half above that price. Inventory remained tightest among lower-priced homes, impacting first-time buyers, which dropped from 33% to 31% of buyers in September.

On average, homes were only on the market for 21 days, which is an all-time low.

Get in Touch with Dave Futch

For more real estate information or to buy a new home, get in touch with Dave Futch at (808) 280-9600 or via email at davefutch@hawaiilife.com, he’d love to hear from you!

Oak Is Out, Hemp Is In – America’s First $5.8M “HempWood” Factory Opens

Pre-Travel Testing for Hawaii Visitors For Hawaii visitors, it’s important to know that a mandatory quarantine for all trans-Pacific travelers remains in …