There are currently two opportunities listed in North Kohala to buy over 100 acres of vacant land, each of which is already well through the process of subdivision into smaller parcels. Both listings bear the address “Akoni Pule Highway” as they stretch from near the main road towards the ocean. 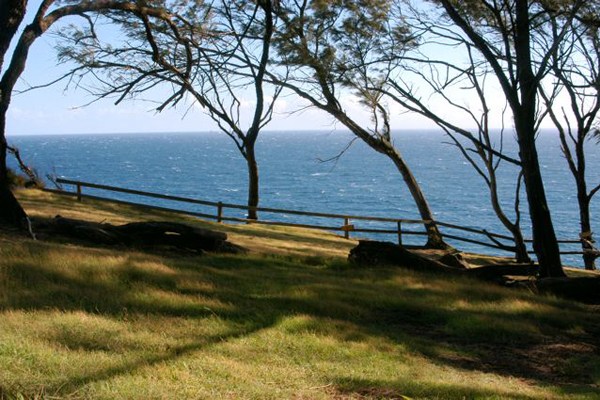 Basics of Subdivision on Large Acreage Zoned for Agriculture

Sometimes buyers reading my posts about ranches for sale on the Big Island will contact me looking for thousands of acres. More often, the criterion I’m given for large acreage means something at least 40 acres. That’s because in my North Kohala market (near the towns of Hawi and Kapaau), the most frequently encountered zoning is “Ag-20a.” The “20a” means any parcels resulting from subdivision would need to be at least 20 acres each.

There are other criteria that need to be met, including a legal access to each lot – and, importantly, water (although access to the grid for electricity is no longer considered important as many owners choose solar and wind power rather pay to install access for HELCO to provide at some of the highest rates in the nation.) Any existing lot, even if currently vacant, is entitled to a water meter. However, until the County brings its new well on line, no water meters are available for newly created lots. Hence creativity, more money, and/or a variance are required.

Is there value to buying a large acreage with preliminary or final subdivision versus the same acreage in raw state? Depending on the complexity of the parcel, it can take years and tens of thousands of dollars for surveyors, lawyers, and a planning consultant to guide you through the pitfalls of the process. If title to your property is through land court rather than regular system, add another layer of complexity and be prepared for a backlog of years for that transfer certificate of title to be typed!

118+ Acres: Near Oceanfront, Near Hawi, Near Subdivision Approval 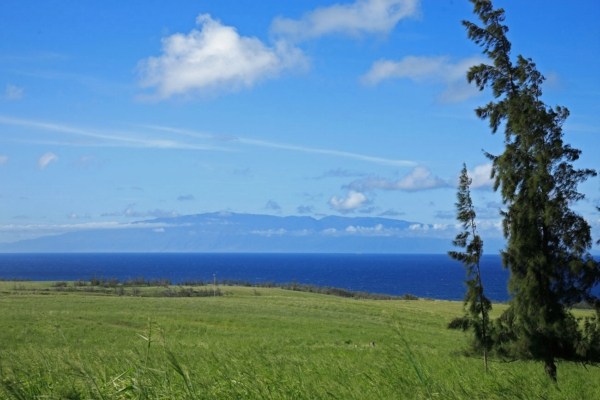 The 118+ parcel just below Hawi town is an opportunity for an investor to take the subdivision to the next level. The seller has already brought electric, phone, and cable to each lot…and creatively dealt with providing access to each lot as the subdivision parallels Hawi Rd (Alalae) going almost from the highway down towards the ocean, but is an interior parcel behind existing homes along both roads.

The two conditions remaining on the tentative subdivision approval are:

1. Water. One meter is available for the existing, pre-subdivision lot. All the work has been done to get approval for a well to serve the subdivision. So the new owner could invest in the well (which could still provide ag water even after County water becomes available), or simply wait for the County.

2. Final mapping. This being Land Court, after subdivision approval from the County is final, the survey map has to be approved by Land Court for the new parcels to be registered.

After these steps are done, the owner is free to sell each of the parcels…and if the buyer times it right, that will be somewhere near the peak of the current market cycle. At the bottom, 20-acre parcels have been selling a little under $500,000 – which makes the asking price of $2.8 million for the 5-lot subdivision look a little steep. But at the peak of the cycle, near-oceanfront lots in Puuepa Ranch down the road sold for up to $1.25 million. As they say, timing is everything. 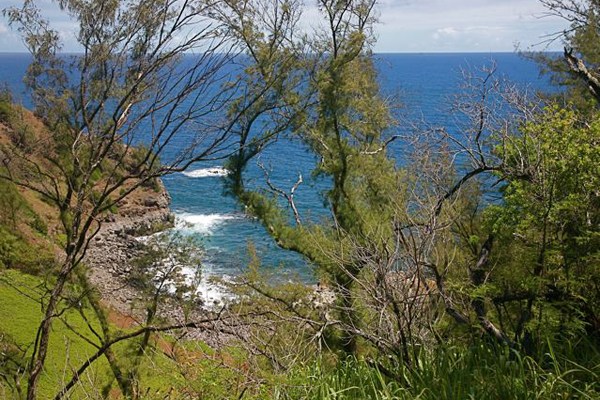 There are three listings for “Ainakea Makai,” the large acreage with final subdivision approval. Prospective buyers have told me the listings present a somewhat confusing array choices. Here’s the best way I can explain the situation.

First point to understand: unlike the Hawi parcel, none of these configurations represents the entire newly created five-parcel subdivision. Nor do the sum of the three listings equal the entire subdivision.

Second point: in addition to the 5-lot subdivision, the seller owns two adjacent lots from a previous subdivision of an even larger parcel. Remember the water? Each of the three combinations offered for sale is structured to include a parcel that currently has the right to a water meter.

In other words, depending on which listing sold first, the other two listings would be withdrawn or re-structured. Look at it as a menu of options with appeal to buyers with slightly different criteria and plans. 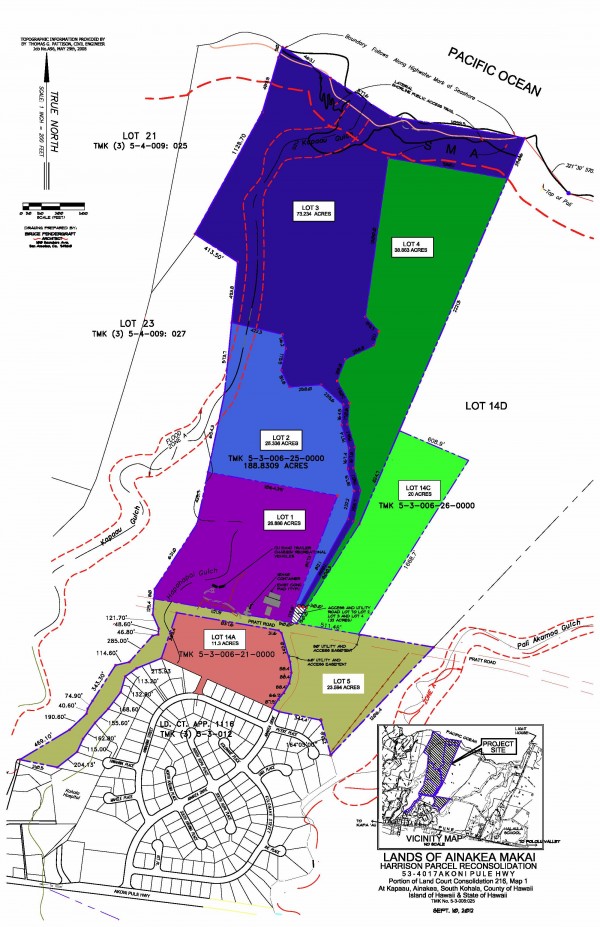 Now to make sense of the listings.

Offered for $1.9 million, (MLS# 262557) consists of two non-oceanfront but great ocean view parcels, total 58.86 acres. On the map, that would be the bright green and dark green parcels.

Offered for $4.9 million, (MLS# 262558) consists of two parcels as well, total 98.57 acres. The two are the (appropriately colored) navy oceanfront parcel and the one right above it.

Offered for $6.8 million, (MLS# 262645) consists of the four parcels covered by the the other two listings. The math works! Although technically you could build four homes, only two would currently have access to a water meter, so that would have to be addressed in the permit process.

This seller has not invested in bringing utilities or paved roads to the lots. The target is a different kind of buyer for a different kind of property…relatively undeveloped land with the wide variety of features for which Kohala is known: ocean views and gulches and cliffs and flat pastures and enormous banyan trees. The logical buyer for these listings is likely buying for their own use rather than primarily being interested in profit potential from subdivision.

I have written a short book in the form of a blog post, and there’s a ton more to know about both options. If you are an interested, qualified buyer – contact me!