I’ve written a number of previous posts explaining some of the peculiarities of buying oceanfront property on the Big Island, and of developing or just building on oceanfront land here.  My topic today is a current situation with respect to the County’s approval of the required public shoreline access at Kohala Kai, a small oceanfront development just north of Kohala Waterfront in North Kohala.

A lot has happened since my blog post mentioning Kohala Kai last March.  Grants of easement on the public access for Kohala Kai had worked their way through the process of approval by the Planning Director, County Corporation Counsel and Mayor, and were forwarded to the County Council for acceptance at the beginning of July.  It was at this point that community opposition emerged, and over the months since then the number of stakeholders in the conversation has swelled.

All stakeholders agree that this is a precedent-setting case. On the one hand, this is a test case to hold the Planning Department’s process accountable to a new era of transparency and community involvement promised in the Hawaii County Community Development Planning through which plans for each of the island’s nine districts have been created from the bottom (community) up and enacted by the Council as ordinance.  Additionally, there are substantive questions regarding the location of the trail proposed to be recorded as the public access, that could set precedent for future approvals.

Shoreline Public Access on Hawai’i Island: Who is Involved?

While any subdivision process is primarily subject to approval at the County (Hawai’i Island) level, most readers  will be aware that Hawai’i State statutes protect and preserve shoreline areas for the benefit of the public, as well as protecting access rights for Native Hawaiians to exercise traditional practices, whether for subsistence (e.g. fishing) or cultural purposes.  Here on the Big Island, we also have the federal government involved in the form of the National Park Service, which manages the Ala Kahakai National Historic Trail (the link is to a blog post by a Hawai’i Life colleague that explains this 175-mile trail.) 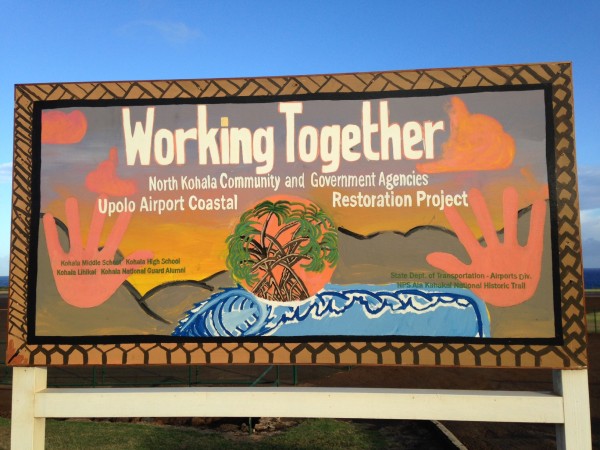 Prior to the most recent Community Development Plan (CDP) process, community input during a subdivision approval process depending on the vigilance of community organizations and individuals, some of whom have worked on these issues here in North Kohala for over three decades.

Two things are different now.First, the North Kohala CDP (NKCDP), having been passed as ordinance in 2008, gives the community voices more standing.  Public Access was one of four issues that a dedicated focus group addressed in the NKCDP.

Second, that focus group kept right on meeting monthly after the passage of the CDP, and became a place where community members, oceanfront owners and their representatives, and County, State and Federal officials and employees could work together as the sign above celebrates in the context of a restoration project underway on the oceanfront at Upolu Airport.  Two of the strategies for achieving the public access goals in the CDP specifically relate to this improved cooperation, and the Access Group must be complimented for its success in this area.

When in my March blog post I wrote “The developer has worked closely with the North Kohala Community Access Group to satisfy requirements for oceanfront public access and to identify and protect cultural resources in this historic area. In both its commercial aspects and its sensitivity to its environmental and historic context, Kohala Kai is a model for future coastal development“, this was an accurate statement at the time. In all the more recent meetings, community members as well as county employees and council members have complimented the developer and his representatives for having met with the community regularly and for doing everything that was required of them.

There were at least two breakdowns in the process, despite everyone’s genuinely best intentions.  First, neither the Planning Department nor the developer’s attorney notified members of the Access Group as the grant of easement documents went through the approval process. The community therefore felt blindsided when they heard from a Council member that it was up for approval. The developer’s representatives in turn felt blindsided by the community opposition, given their genuine attempt to be inclusive.

Second–and this is obvious with 20/20 hindsight–the South Kohala community felt blindsided as they were not brought into the process along the way, despite the fact that Kohala Kai lies a scant quarter mile from the boundary between the districts, and thus most of the traditional users live in South Kohala rather than in North Kohala.

If it were only these breakdowns in process that were at stake, a compromise might have been reached earlier this year.  However, the community’s concern over process is overshadowed by a deeper concern over the actual location of the trail as improved by Kohala Kai and as submitted for designation as the official public access easement. This substantive concern has brought additional stakeholders, such as the State of Hawai’i Office of Hawaiian Affairs, to submit testimony opposing the easement as submitted.

The Historic Ala Loa Trail System on the Big Island – What and Where is It? 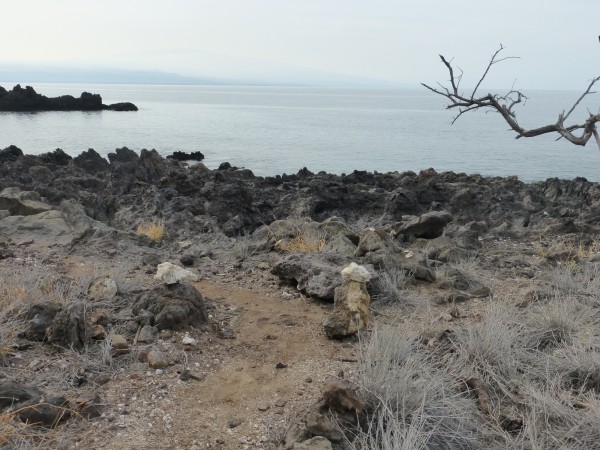 Where should the public access trail be located?  The North Kohala CDP section on public access states:  “The trail should follow the  Ala Loa where it can be identified, or traditional fishing trails.”  The trail improved by the developer is the trail used by fisherman.  The substantive issue is whether the “jeep trail” traversing Kohala Kai is the historic Ala Loa.

Now I’m going to detour to introduce a word you might not expect in this context: epistemology. In my view, the differences of perspective, while presented in legal and cultural language, are even more fundamental than conflicts of cultures or values. They are differences in epistemology, which is the branch of philosophy concerned with how we know what we know or how we know whether something is true.

I am indebted to scholar Manulani Aluli Meyer for what little I understand about Hawaiian epistemology.  What I do understand can best be explained by the distinction between the epistemology of the “old” or Newtonian physics as we are taught in school, and that of the “new” sciences like Einstein’s theory of relativity, or chaos and complexity theory. In the old sciences, the nature of things is either/or. In the new sciences, the nature of things is both/and. Light can be both a particle and a wave. How do you know which way it will be observed?  That depends on the observer.  In other words, the nature of something is not fixed. It is defined relationally.

Coming back to Kohala Kai, the question is “does the Ala Loa exist within the subdivision?”  One argument says “It exists on old maps but was legally extinguished.”  Another says “Any evidence on the ground of the historic footpath was destroyed by jeep usage.” Another says that regardless of the evidence of maps and jeeps, the Ala Loa exists because generations of Hawaiians walked there.  Both the National Park Service and the Office of Hawaiian Affairs, argue that the jeep trail is the Ala Loa. In other words, even if County Planning Department made its decisions “by the book”, if it is accepted that something that is both a jeep trail and the historic Ala Loa does in fact exist, there are legal precedents in favor of its protection for use, at a minimum, by cultural practitioners.

Because this is not the only parcel through which the Ala Loa was once walked, this substantive issue is indeed a precedent-setting decision.

This is a blog post, written in December 2013.  That means that by the time you read this, things may well have changed again. At this point, the Finance Committee of the County Council has again postponed its decision to accept or reject the resolution that would ratify the Grant of Easement as it stands, deferring to its meeting in January 2014.

My sense is that no one involved wants this to go to litigation, but that the principals are prepared to do so. Regardless of what happens next with Kohala Kai, many lessons have been learned from which stakeholders can benefit going forward. We are already seeing this as other pending grants of easement and preservation plans come before the North Kohala Access Group for feedback to the County Planning Department.

All stakeholders are welcome, truly welcomed, at the Access Group’s meetings on the first Wednesday of each month. I personally encourage all my clients who own oceanfront properties in North Kohala to attend.

Wailea for the Win What an amazing vacation that Wailea provided for us. We had the opportunity to visit friends …

What started as a simple hike for exercise led to a truly unexpected experience from the ancient people of Hawaii. …