My friendship with Jenny Kalmbach began on the beach at Kukio. When Jenny joined the Outdoor Pursuits at the Kukio Golf & Beach Club, you just couldn’t help but be drawn to Jenny’s magnetic personality. Her enthusiasm and love for the ocean is inspirational. 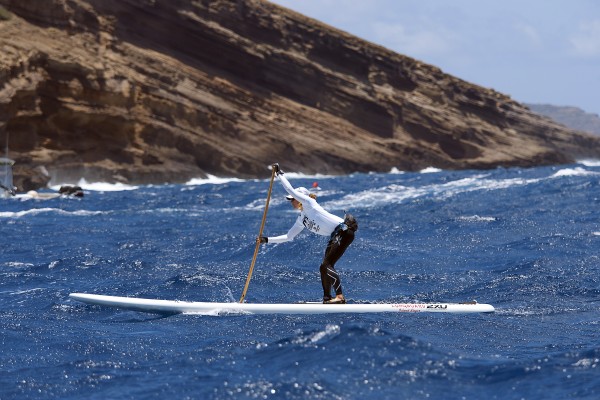 For the past several years, I have watched Jenny’s love for stand up paddling grow from a hobby to a professional athletic career. Today, Jenny represents Hawaii’s Big Island as she travels the world competing in stand up paddling races. Last year, Jenny’s dedication to the sport earned her the #2 honor in SUP Racer 13 Best Top Female Paddlers of 2013.

I’m one of Jenny’s biggest fans, and I believe her story and success is an inspiration well worth sharing.

CN: Could you tell us about where you grew up?

JK: I was born in San Jose, Costa Rica, but spent much of my childhood in Bahia Drake, a very remote area in the southern pacific part of the country. It’s a beautiful place, with the ocean on one side and backed by the rainforest. We lived in a bungalow and as children, ran around during the day, exploring the forest and swimming in the river. As I got older, we lived mostly in San Jose, where I attended school. After graduating high-school, I moved to Vancouver, Canada to attend the University of British Columbia.

CN: Where did you begin your career as a stand up paddler?

JK: I first learned to stand up paddle when I was working at Outdoor Pursuits at Kukio Golf and Beach Club, in Kona, Hawaii. It was in early 2006 and stand up paddling was in its infancy. We had a couple boards and a friend of ours said we had to try it, he was sure it was going to be the next big thing. We thought he was a bit crazy, but sure enough, he was right. I spent most of that first winter SUP surfing, and later transitioned into distance paddling and racing. 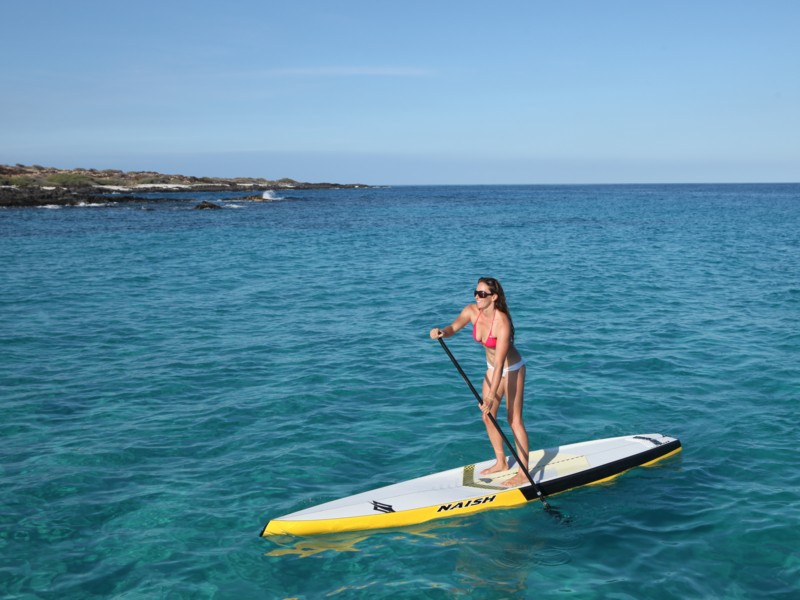 CN: How long have you been competing?

JK: In 2007, I entered my first SUP race, a 4-mile coastal race here on the Big Island. I was immediately hooked. Having competed in high-school and university for different sports, I missed that feeling, so when SUP racing presented itself, it was a second chance. It gave me something to train for and it was exciting. I had no idea then that it would go on to give me so many amazing opportunities, but I am so happy it has. 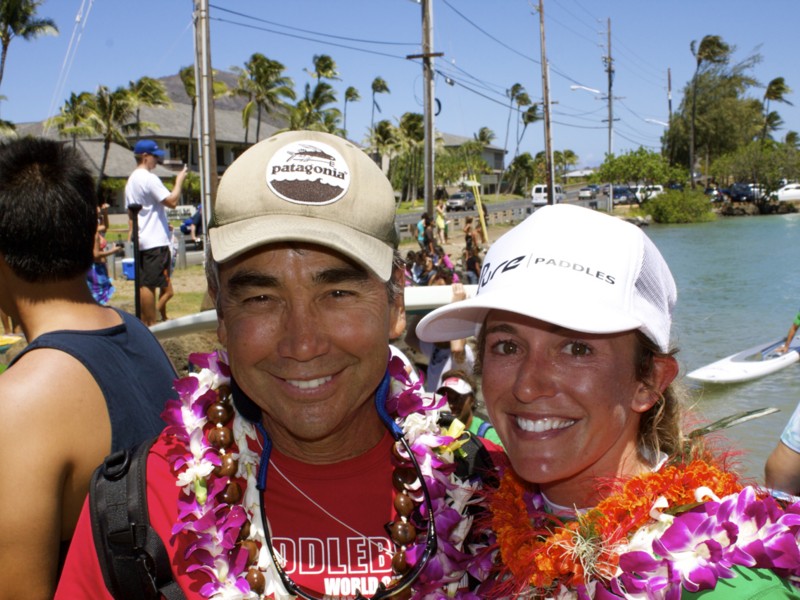 CN: What single adventure and/or paddling race would you consider as your most significant accomplishment in your paddling career to date?

JK: There are two moments that I consider to be my most significant accomplishments. The first was winning the 2009 32-mile Molokai to Oahu, it is the most prestigious sport event and just being able to cross the Kaiwi Channel is an experience in itself. Winning the race is a feeling I will never forget, it still makes me smile to think of all the hard work and dedication it took to get to the finish line, and how rewarding it felt to have won.

The second accomplishment was paddling from Oahu to Kauai, an 82-mile crossing. It was part of an adventure documentary, Destination 3 Degrees. Due to weather concerns, the paddle took place mostly at night, we left Oahu at 2pm in the afternoon, paddled non-stop throughout the night, and eventually made it to Kauai at 6am the following morning, 16 hours later.

I was exhausted after the paddle, but there was so much excitement for having made it across safely. It was a rush of so many emotions, and I will always think about that crossing and the experience, and know that we are truly capable of anything. 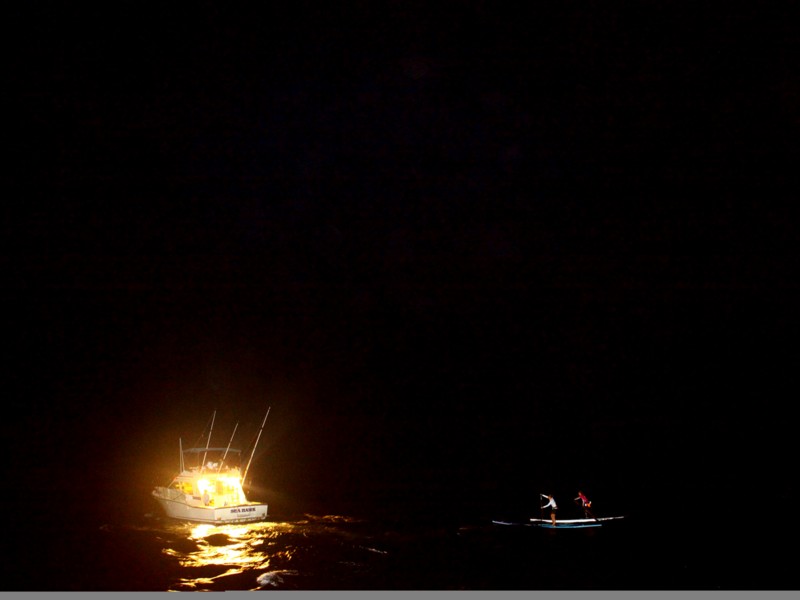 Crossing Between The Hawaiian Islands at Night – Destination 3 Degrees

CN: What is the best advice you can give someone who is aspiring to be a stand up paddler?

JK:: Get out on the water as much as you can, and get the right equipment. There are boards and paddles for all types of paddling, recreational, racing, surfing, etc. Find what it is that you want to do and get the equipment for that. Once you’re set, go out and paddle, and enjoy the experience. It’s a good physical workout and it’s great for the mind as well…if you enter the water in a bad mood, I can assure you, you will leave in a good mood!

CN: Tell us about Destination 3 Degrees, how did you get involved?

JK:: Morgan Hoesterey had this crazy idea to paddle across all the channels in Hawaii, she reached out to me and Destination 3 Degrees was born. We decided to raise awareness for the issue of plastic contamination in the ocean, so we teamed up with the Algalita Marine Research Foundation. The adventure took place in 2010, and was one of the first stand up paddle adventures of its kind. We learned a lot along the way about the marine debris issue, adventure paddling, and ourselves. 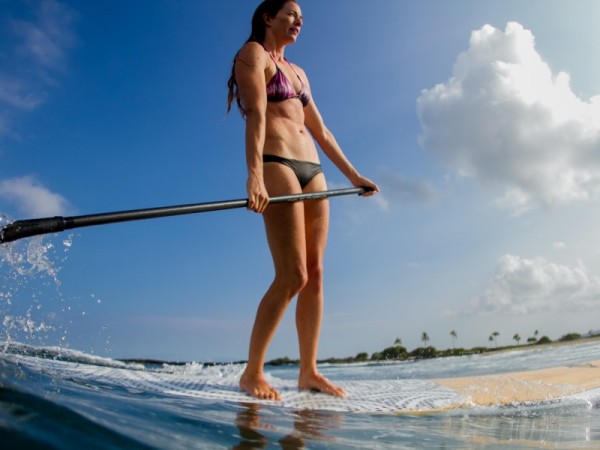 Most people assume that the paddling was the hardest part, but to be honest, it was everything else – the logistics, the planning, moving from point a to b. Once we stepped on to our boards, we were in our element, so that was easy! After the crossings (from Big Island to Niihau, and all the channel crossings in between) we released the documentary. It was great being able to relive the adventure and see what we accomplished. It was truly a once-in-a-lifetime experience, and I am so grateful to have been a part of it.

CN: Are there any particular coastlines you recommend on the Big Island to paddlers seeking a new adventure?

JK: I love the Kona Coast because it is where I live and train, and it is so beautiful, but the rugged northern Kohala coast is spectacular. It is off the beaten track though, so don’t go alone, and only go with someone experienced who knows the area.

This 4 bedroom, 2 bath fully remodeled classic charmer is privately situated on over 1/3 of an acre in an …

Happy Aloha Friday! This weekend, we have a few Maui events to share. Marty Dread is featured at tonight’s Kihei …