With 8,843 lots and approximately 4,000 homes, it’s no wonder that many of us view Hawaiian Paradise Park as the second city of East Hawaii. Consistently one of the fastest growing subdivisions in the State of Hawaii, it speaks well that years ago the association adopted their own general plan in order to ensure that future growth would not happen haphazardly. 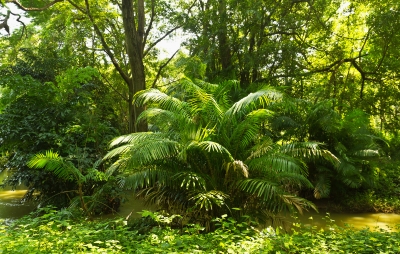 HPP Has a Lot to Offer

It seems to have become the address of choice for many mainland transplants, yet some local home buyers still resist the idea of moving to the country even though a home in HPP sells for substantially less than a comparable home in town. Truth is, the HPP home will actually be on a larger lot, be much newer, and have numerous upgrades.

I recall feeling a definite disconnect between what I saw and comments I’d heard from many local folks when I first visited the Park. I was impressed by a breathtakingly beautiful coastline outlined by a bay popular with fishermen and whale watchers alike. I found huge canopies created by mango groves and bamboo orchids blanketing the landscape as far as I could see.

HPP is quickly evolving into an established community where neighbors have pulled together to become a tight-knit community. Consisting of mostly one acre lots with four main arteries connecting the highway to the ocean, residents each year make fewer and fewer compromises. While cable television is inching Makai as well as up from the ocean, most areas now have power, phone, and even DSL. As the paving of the 137 miles of roads gradually occurs, things seem more groomed, but it’s still “country,” and unequalled peace and quiet are what attracts people to the area.

Still Evolving, but at a Nice Pace

While most homes are still on catchment, more and more have installed their own wells. Strides such as UV filtration have made catchment virtually a non-issue. There are no covenants, conditions, and restrictions, which means that, in this agricultural subdivision, it’s possible to have not only animals but crops as well.

Besides agricultural pursuits, there’s a full-time veterinarian, a couple of premier plant nurseries, a full-time fire station, and a variety of home businesses, which have found a place to flourish.

Interestingly, area residents who pre-dated the first occupants considered the lands marginally productive. I think most who live in the Park would definitely disagree. The mild climate allows most everything to grow and thrive. With an outstanding association and active community policing, the association pavilion is a busy hub where residents gather to participate in structured recreational activities, or the active senior program.

I spend a lot of time in Hawaiian Paradise Park. Most people feel it’s a great place to live – but you don’t need to take my word for it. Take a Sunday drive. If you’ve never been there, or if you haven’t been there in a while, trust me, you’ll be proud to see how this little slice of our Hawaii is growing.

See ya in the Park!

Denise Nakanishi is a REALTOR Broker with Hawai'i Life. Denise Nakanishi is one of Hilo's most acclaimed real estate agents. She reached the rank of Major in the US Army and is now known by many as "Major Mom." The nickname fits–not only does Denise bring the discipline and mission-oriented attitude you'd expect, she's also caring and compassionate, always looking out for her clients like they're her own family. Having made the Big Island her home since 1987, Denise combines her extensive knowledge of the area with a sharp focus on customer service and the results speak for themselves. She's the recent recipient of the Best East Hawai`i, Best of Zillow, Chairman's Circle Award, President's Circle, Top Producing Agent since 2001, and Realtor of the Year awards. Denise stays ahead of the curve because she's passionate about education–she served as Education Chair for Hawaii Island REALTORS® for many years. She's one of Big Island's best real estate resources, known for her weekly article in the Hawaii Tribune Herald. Denise leads Team Nakanishi for Hawai`i Life, who is committed to their family, work, and community. In her little time away from work, Denise is a committed runner and Grandy. She also devotes many hours to various Veterans' Organizations, the East Hawaii Cultural Center, and the Hawaii Island REALTORS®. You can email me at denise@hawaiilife.com or via phone at (808) 936-5100.