How Do Hawaii Tax Rates Compare to Other States?

Whether you already live here, or you’re looking to make a move to Hawaii, you may be surprised to learn that Hawaii residents currently enjoy the lowest “effective tax rate” on owner-occupied housing in the nation – at just 0.28%. We often think of Hawaii as having a high overall cost of living, but when it comes to property taxes, Rainbow State homeowners get a little bit of relief!

It’s important to note that each state earns its revenue in a variety of ways. Income and property taxes are but a few examples. Here in Hawaii, the state also generates its revenue from the General Excise Tax (a sales tax), as well as from a visitor tax known as the Transient Accommodations Tax, affording the state government a little wiggle room when it comes to our property taxes. 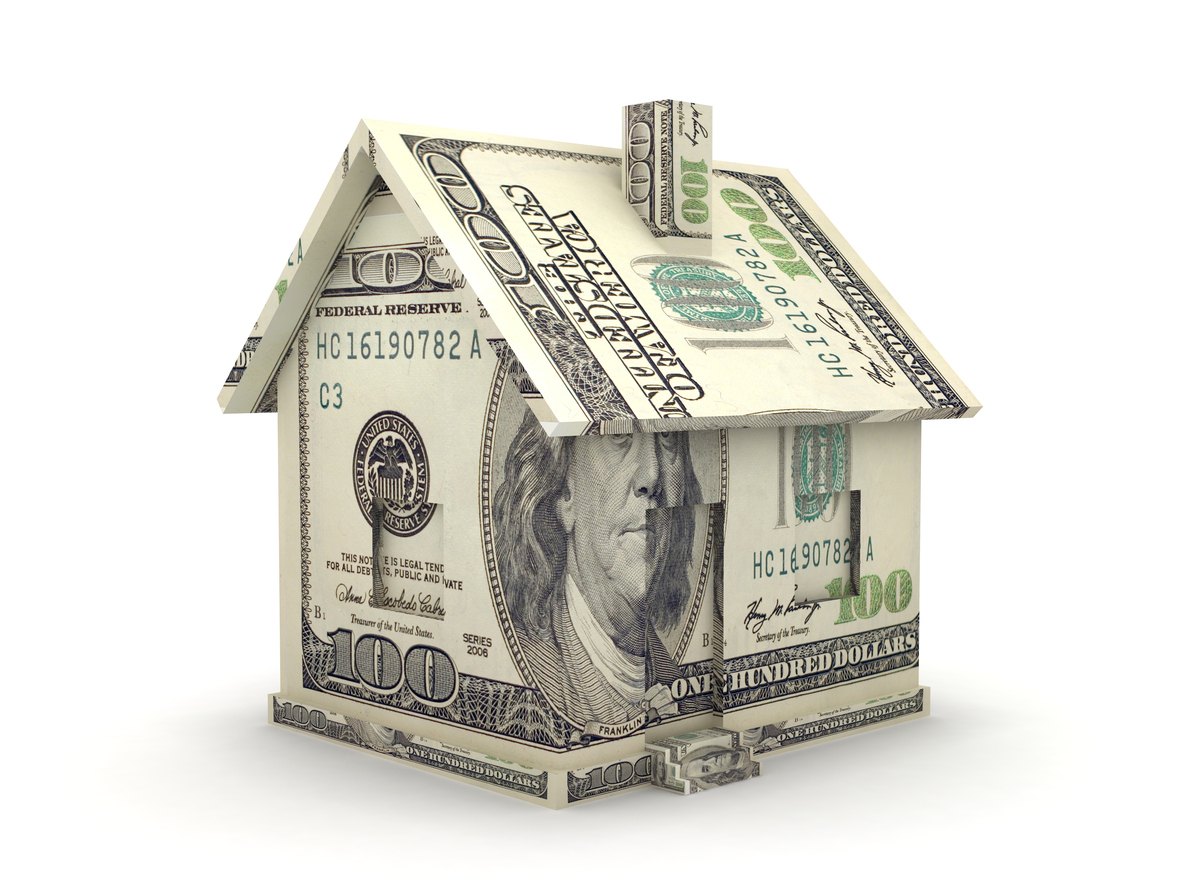 States tax property in different ways. We won’t bore you with all the details, but a 2015 study done by the Tax Foundation, based on U.S. Census Bureau data, sifted through all the methods and madness to determine the mean effective tax rates for owner-occupied housing, across all states. On an individual level, that would be the total real taxes paid in a given year, divided by your home’s total value. Statewide, the effective tax rate is the total amount of residential property tax actually paid to the state government, expressed as a percentage of total home values.

It is interesting to see the Tax Foundation’s findings and how Hawaii rates currently compare to owner-occupied tax rates across the country. Although the average home price in Hawaii is more than $500K, (currently it’s at $613.5K, according to Zillow), Hawaii residents pay about $1,400 in property taxes on average each year, which is about $700 less than the U.S. average. 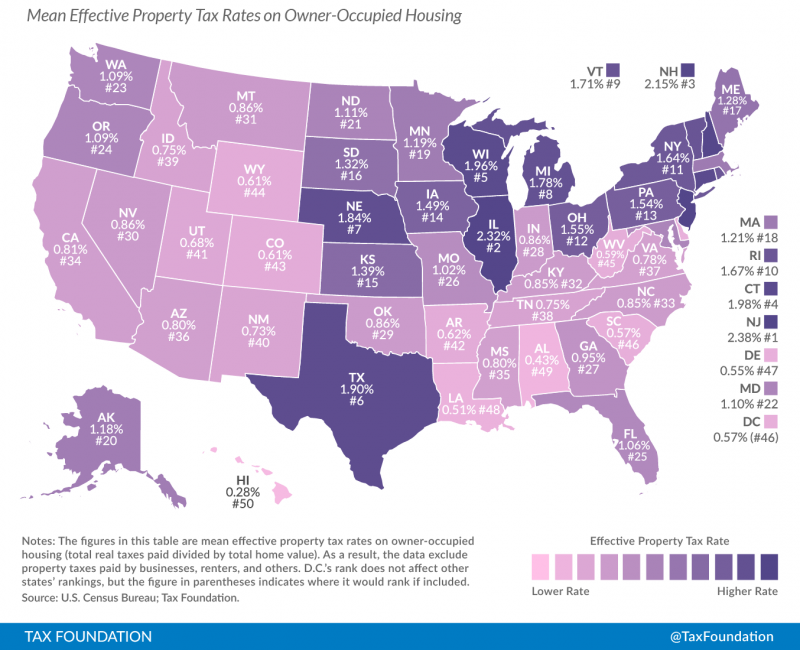 If you factor in all of the tax breaks allowed to a homeowner who actually lives in the property, then surprising things happen. For example, on the heat map below, California is known to have an average tax of about 1.25% of the purchase price (1% based on sales price, bond indebtedness, and special district assessments). Factoring in the average tax paid by actual homeowners, that figure drops to 0.81%.

That amount is still more than double Hawaii’s effective tax rate of 0.28%, which, as we mentioned earlier, is the lowest in the nation. In contrast, homeowners in the top 3 states pay over 2% on average in homeowners’ property tax. Leading the nation with the highest effective tax rate is New Jersey at 2.38%, followed by Illinois at 2.32%, and in third place, New Hampshire at 2.15%.

Of course, the mean effective property taxes vary by island and county, as it’s a function the home values by island, as well as the rates set out by county. Click here for a table of the 2017/2018 property tax rate by county, per $1,000 of property value. Hint: Honolulu County has the lowest rate.

With the new tax reform bill in place, it’s hard to know how federal income tax rates will change for Hawaii residents in the coming year. We’ll be looking closely at this topic as new studies come to light. Here’s where life in Hawaii gets a little more expensive. While some states lean heavily on property taxes as a source of revenue, others levy high rates in other major tax categories to support them. One example, of course, is income tax rates.

As you’ll see in the heat map, below, the Tax Foundation’s data shows that Hawaii’s marginal tax rate is one of the higher rates in the nation, at 8.25%. But it’s still far lower than California’s rate of 13.3%, which is the highest in the nation, followed by Oregon at 9.9%, and Minnesota at 9.85%. 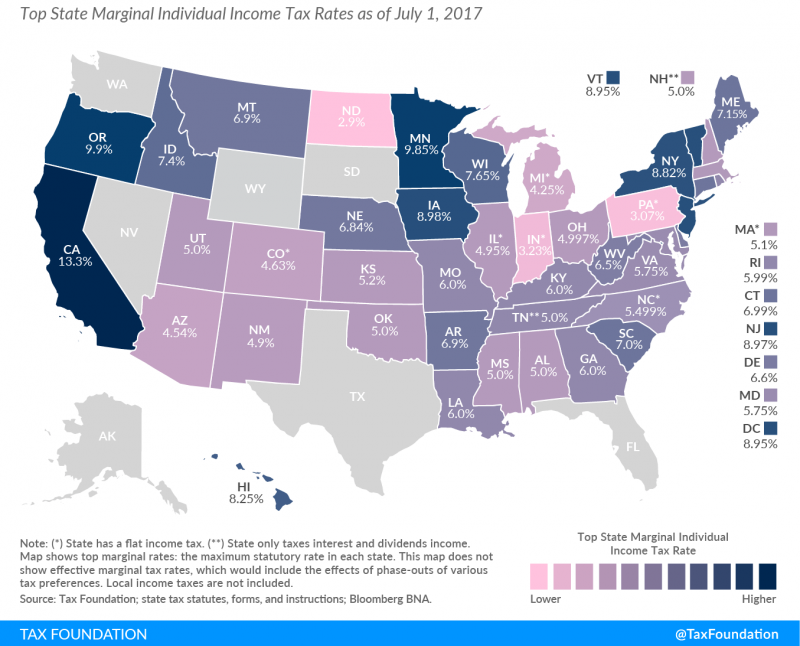 In July 2017, the state of Hawaii passed a bill (HB 209) that raised the marginal income tax rates from what you see in the heat map, above. The bill effectively creates three new tax brackets at the higher end of the income spectrum and raises the marginal individual income tax rates for some earners from 8.25% to as much as 11%. If you’re making closer to Hawaii’s median income (in the mid-$80K range), then these new brackets likely won’t affect you, as they’re directed at high-income earners. 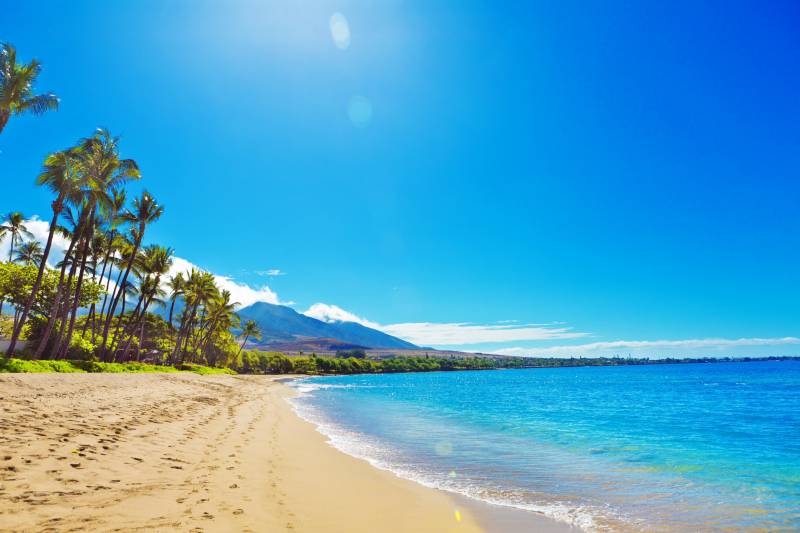 This was done to effectively cover the costs of the state’s Earned Income Tax Credit (or EITC). The federal level EITC is a tax credit targeted at working low-income individuals. Hawaii’s state-level EITC is valued at 20% of the federal EITC and is non-refundable. In 2014 (the last year for which we could find data), 16.7% of Hawaii residents received a federal EITC, according to the IRS. So while we may pay higher income taxes overall, the revenue generates by the state government contributes to the well-being of the lowest income individuals in Hawaii.

On balance, it’s a pretty good trade-off to live in this beautiful, tropical state – full of natural beauty, diversity, and with a near-perfect climate. While Hawaii residents get a break on property taxes relative to other states, we pay more in annual income taxes. Yet, as freezing temperatures blast through the Northeast this week, we can count the dollars we’ve saved on snow tires, central heating, winter coats, boots, hats, and scarves – not to mention the need for multiple wardrobes to suit each of the four seasons. We’ll never have to buy a snowplow or a shovel, or pay the neighborhood kids $20 to shovel our driveway. Also, many Hawaii residents can simply reach out to their backyard banana, avocado or mango trees for a snack, not to mention find plenty of free, outdoor pursuits to keep us entertained year-round. There are plenty of ways to save a few dollars in order to live the Hawaii lifestyle that’s right for you.

Nice article though I think you missed two important distinctions in the property tax rates – if it’s a rental property in a VDA – the rates are SIGNIFICANTLY higher, as are the things like trash pick up. Secondly, the TA & GE taxes have gone up considerably this year.

Lastly, and most important – in most other States, public education is covered by the property taxes, but not here in Hawaii – that’s covered by income tax and because many (wealthy) second home owners don’t pay state taxes in Hawaii, we don’t collect as much for education which is a travesty. So please consider factoring these into your stats – or at least mentioning them as they are important for everyone, not just new buyers, to know.
Thanks!

Awesome blog! Super helpful. Thank you!
Any input on where we can find useful tax information for foreign investor buyers??
Mahalo

Great article. We are moving from California over to the islands in the next year or two. I think our cost of living may not change that much. Just different pots the money goes to. As to California, I’m not gaining to miss much…..