An overdue project is in the works for Hanalei’s Black Pot Beach Park. The county park, which is nearly 2.5 acres in size, sits at the north end of Weke Road near the point where the Hanalei River meets the salty waters of Hanalei Bay. Known as Black Pot, the park, which includes the iconic Hanalei Pier, is a heavily visited park by both local residents and visitors.

The County of Kauai recently acquired the beachfront and several adjacent parcels of land on both the mauka (East) and pavilion (South) side of the park with plans to expand the existing park. Other properties within the boundaries of the project planning area include:

There are areas of concern due to the increased traffic and population on Kauai’s North Shore. Since the 1990s, the residential population has almost doubled from 4,800 residents to a current 7,800.

Bathrooms are the major concern. The current usage exceeds the capacity of the existing facilities. They need to be larger and the cesspool needs to change to a sufficient waste water treatment. It’s just so busy down there now!

On any day down at Hanalei Bay you will find surfers, kayakers, canoe paddlers, campers, kids playing on the beach and jumping off the pier, and families enjoying relaxing beach days. Mornings you can find many walkers/joggers enjoying the bay shoreline. There are also fisherman who enjoy the beach, and pleasure boats or fishing boats launching from the river. Beautiful sailing boats can be seen in the morning during the summer months. It truly is a special place.

Parking is another concern and will be the biggest argument. Locals love to park on the beach and we have done so for as long as I can remember. My partner Mahina Ventura and I went to the community meeting on Wednesday, Nov. 18. This was the first community meeting regarding the Black Pot Park expansion and was mostly a meeting to get the community involved on how they would address the parking situation. The planning firm HHF, hired by the county, split us up into 8 different groups to arrange parking and facilities such as the boat ramp on the large maps that were presented to us (photo below). 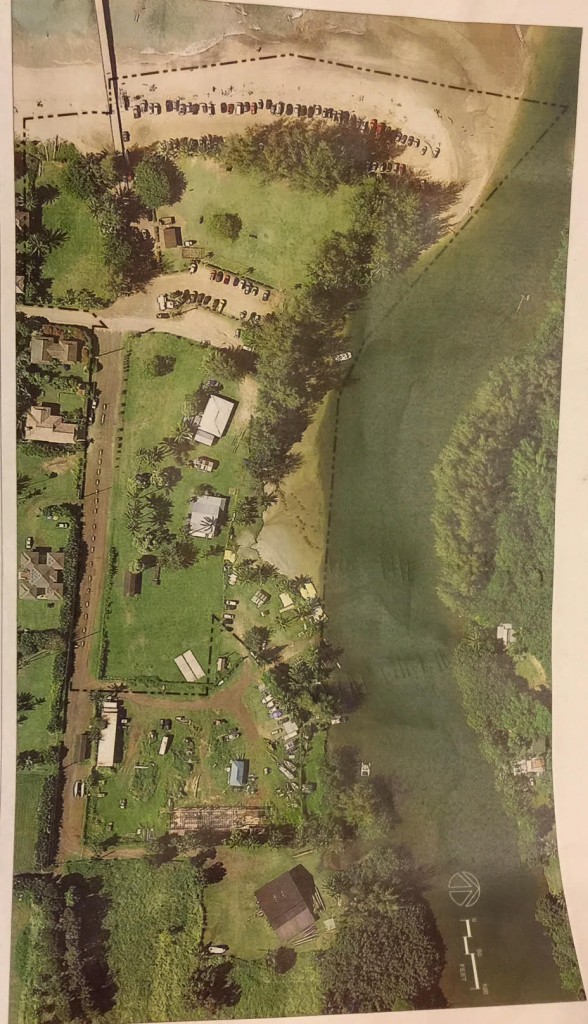 Their idea was to get the community’s feedback on how they would arrange the park to handle all the traffic and facilities. It was interesting to see the different groups’ views on parking and the boat ramp. One thing that was uttered many times is that mostly all who attended were against having the parking along the beach taken away. Many people who surf or paddleboard don’t want to have to walk a couple hundred yards with their boards. Where will everyone unload all their beach stuff?

What Do You Think?

You can submit your comments to the planners at Issues and Concerns.

HFF planning leader Scott Ezer says they want to respect the wishes of the residents to protect their way of life with regard to the park. This meeting was the first of many to come and the intention was to gather ideas from the residents as to how they would improve the park.

Can you keep me posted on the development of Black Pot Beach. I would be interested when it goes to market.

Hi Erin,
Thank you for your inquiry. Black Pot Beach is a Kauai county park and will not be on the market. Are you interested in property In Hanalei? You may mail me at kimberlyestrella@hawaiilife.com.
Mahalo,
Kim

Can you keep me posted on the development of Black Pot Beach. I would be interested when it goes to market.

Hi Erin,
Thank you for your inquiry. Black Pot Beach is a Kauai county park and will not be on the market. Are you interested in property In Hanalei? You may mail me at kimberlyestrella@hawaiilife.com.
Mahalo,
Kim

Can one consider quarantining a vacation? I found myself pondering this question before embarking on our holiday travels to visit …