The District of South Kohala – Big Island of Hawaii 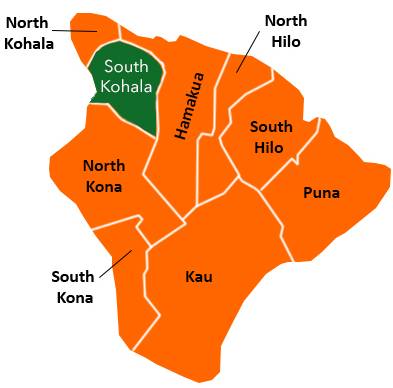 Covering the western flank of Mauna Kea, South Kohala enjoys a unique environment in the rain shadow of the world’s tallest volcano. On the blackened lava flows of the Kohala Coast the annual precipitation can be less than 10 inches, while at just over 2600 feet elevation, on the verdant grasslands surrounding the town of Waimea, the annual rainfall ranges from 15-20 inches on the dry, west side of town to close to 80 inches, just a few miles away on the wet, east side.

Here is an overview of the main areas. 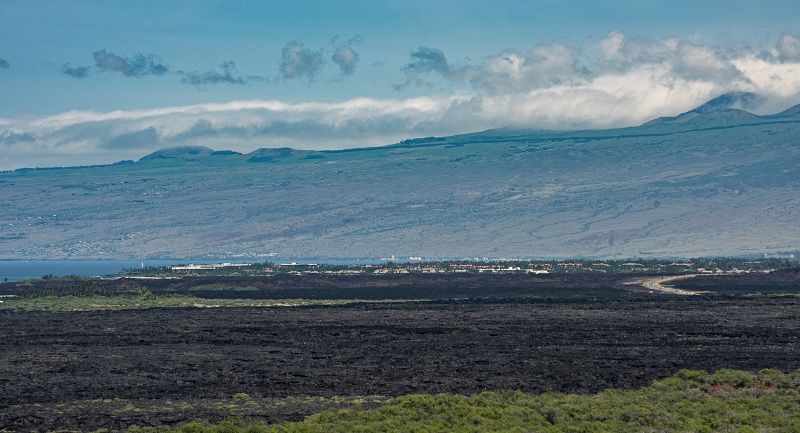 If you are going to mail a letter then it’s good to know the town that sits at the center of the 500,000 acre, Parker Ranch is also called Kamuela. You’ll find the Kamuela Post office, zip code 96743, at 67 Māmalahoa Highway, right in the center of the town, called Waimea.

Other than the post office, there isn’t much to indicate its official name. You will have a hard time finding Kamuela on a map, and if you’re asking locals for directions to Kamuela, they’ll just point you up the hill towards Waimea. The US Postal service does not allow for a State to have two post offices with the same name, there is a post office in Kauai also called Waimea. They renamed our post office Kamuela, which means Samual in Hawaiian and this was in recognition of Samual Parker.

Much of the history of Waimea is the history of Parker Ranch. 30 years before cattle ranching began in Texas, the descendants of the five head of cattle that Captain George Vancouver gave to King Kamehameha the Great, were roaming across this land in the thousands. The Parker Ranch supplied hides and meat to visiting fur traders on their way to China, shipped cattle to feed prospectors in the California gold rush and raised horses for the U.S. Cavalry.

In the 1830s, Spanish vaqueros came to teach the local Hawaiian cowboys to ride and rope and they became the Spaniards or paniolos, Hawaiian for Espanol. In 1908, three paniolos went to Cheyenne, Wyoming for the World Rodeo Championships and Ikua Purdy won the steer roping competition.

In the 1960s, then sole owner of the Parker Ranch, Richard Smart agreed to lease some land to Laurance Rockefeller for the Mauna Kea Beach Hotel. “It’s on land the cows don’t like but the tourists love—hot and barren” described Smart. Opened in 1965, the Mauna Kea became the first of many resort developments along the Kohala Coast. Smart also authorized the sale of land to develop Waikoloa Village.

Not to be confused with the Hilton Waikoloa Village Hotel, Waikoloa Village is a planned community that sits amid the grasslands of Parker Ranch, 1,000 feet above the Kohala Coast. Centered around the Waikoloa Village Golf Club, this quiet residential community has a number of private condominium, townhome, and single family developments.

The original luxury resort on the Big Island, the Mauna Kea Beach Hotel on Kauna’oa Beach shares the resort property with the nearby Hapuna Beach Prince Hotel. In addition to its signature Robert Trent Jones, Sr. designed golf course and the Hapuna golf course, the resort also boasts one of the top 10 resort tennis centers in the World with 11 oceanfront courts.

The Bluffs is an exclusive development of oceanfront and ocean view estate homes adjacent to the Mauna Kea Beach Hotel. Custom designed private homes are scattered along the fairways throughout the resort and you will also find the luxury Kauna’oa townhomes, each with a private pool and an ocean view.

On the Mauka (mountain) side of the highway, but still, on the Mauna Kea property, several luxury villa developments are located in the Uplands, including the Ridge, Kumulani and the Villas at Wai’ula’ula.

As well as the Hilton, the Waikoloa Beach Marriott shares the resort as do several vacation rental and private home developments. The Hali’i Kai Condominiums offer a beautiful oceanfront pool and fitness facility as well as ocean view apartments in a private gated community within the resort. Kolea condominiums enjoy direct beach access through their exclusive beachfront recreation facility. Other condominium developments including the Vista, Colony Villas, and Fairway Villas enjoy views of the golf course. The Waikaloa Bay Club is located on the uphill side of the highway among the fairways of the Waikoloa Golf Club’s Kings Course.

The resort is served by two shopping and entertainment facilities. The King’s Shops and the Queens Marketplace.

The Mauna Lani Bay Resort began development in 1972 when Francis H. I’i Brown sold the 3200 acre oceanfront parcel to a Japanese consortium. Long before roads were built across the lava flows, there was a small cottage nestled here by the beach. The cottage, built for James Woods and his wife Eva, descendants of Parker Ranch founder, James Parker, is still preserved on the resort grounds. Jack London and his wife were entertained here by the Woods when they visited Hawaii.

In addition to two luxury hotels, the Mauna Lani Bay Hotel & Bungalows and the Fairmont Orchid, several residential developments have been added to the resort. The Mauna Lani Terrace Condominiums enjoy ocean views and a tranquil setting on the shores of the ancient Waipuhi Fish Pond. The Mauna Lani Point Condos share the view of the crashing surf with two of the signature oceanfront holes of the famed Francis H. I’i Brown South Course. The Islands at Mauna Lani and several other private condominiums and single-family homes share the resort grounds with two 18 hole golf courses, an internationally renowned spa, recreation center and ancient Hawaiian archaeological sites.

The Shops at Mauna Lani is home to several galleries offering work by local Hawaii artists, various fashion and accessory boutiques and a branch of the popular local grocery chain, Foodland Farms, including a full-service bakery, deli, seafood, and meat department. Upstairs at the shops is Ruth’s Chris Steak House and Tommy Bahama’s Restaurant and Bar.

Homes, Condos, and Land For Sale

In the district of South Kohala, you can find lots that start at $160K, in Waimea, all the way up to a $23M spectacular oceanfront estate in Puako!

I recently shared on social media an anecdote from the Denver real estate market I read in an industry newsletter. …

As of the beginning of May, the number of condominiums sold on the Big Island was exactly double compared to …