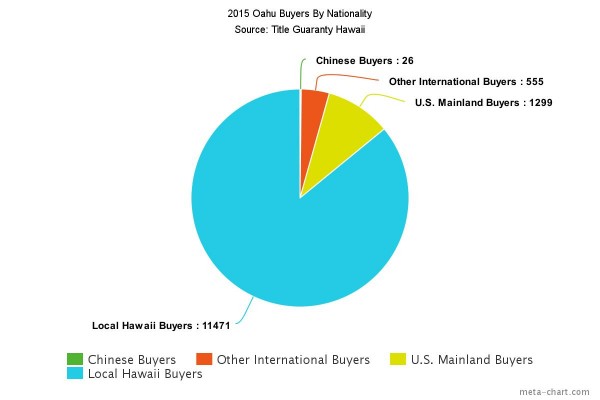 I’ll admit the Chinese data is a bit skewed, as I understand they often move money through Canada, and would then show up in Canadian buyer statistics. The Canadian numbers aren’t staggering, though, at only 39 total transactions on Oahu in 2015. Hence, particularly with the recent downturn in China, I don’t believe the Chinese buy-out of Oahu is happening at the rate the rumor mill would suggest.

I recently had a listing in a very rural area on the west coast of Oahu. When we met for the first time, the seller had already developed the opinion through common media that the home may appeal to “all those Chinese buyers.” She’d also heard from a neighbor that another home had been shown to a Chinese buyer and was certain others were waiting in the wings.

While international marketing is certainly a part of our marketing plan for all homes, I explained the most likely buyer was probably already living in Hawaii, given the type and location of the home. The seller was adamant that I focus on advertising to the Chinese. I placed a few ads with a Chinese media outlet, and nothing…crickets. The property did attract a good amount of attention through our extensive internet exposure, but none of the potential buyers were from China.

In reality, Chinese buyers generally focus on Honolulu properties, at an average price point of $633K. Looking ahead to the lower economic projections for China in 2016, I would expect to see fewer purchases this year.

Who is Most Likely to Buy Your Home?

If you’re considering selling your home and would like to know who the most likely buyer is and how we would target that person, I’d be happy to discuss your situation.

Many might not realize that lu’aus are a Hawaiian cultural tradition that dates back nearly 200 years. Although today they …

As we navigate through the real estate market together, I am sharing monthly real estate statistics from the REALTORS® Association …