We recently caught up with Lallie and Chris Russell after their family’s whirlwind year. It began with their family’s experience on set at HGTV’s Hawaii Life program last May. After filming their episode in the 10th season of HGTV’s popular program, the Russells didn’t skip a beat. The very next day, they flew from the Big Island to Africa.

Lallie, her husband Chris and their four biological children spent the better part of the past year living in Uganda, where they adopted their fifth child. The Russells first met their daughter Daphine at an orphanage they visited in 2015 when she was just four years old. They returned regularly for the next couple of years, visiting her each time.

Their faith led them to adopt Daphine last year, a process that took longer than expected. They filmed their Hawaii Life episode and flew out on May 1st, and by May 9th, their new daughter had joined their family. However, they didn’t receive final adoption papers until October.

In the interim, the Russells spent six months in Uganda completing the adoption process, while Lallie Russell continued to homeschool all five of their children. Friends at home in Hawaii managed their new Kailua-Kona home for them, which they’d found with the help of Hawaii Life agent Mike Despard. 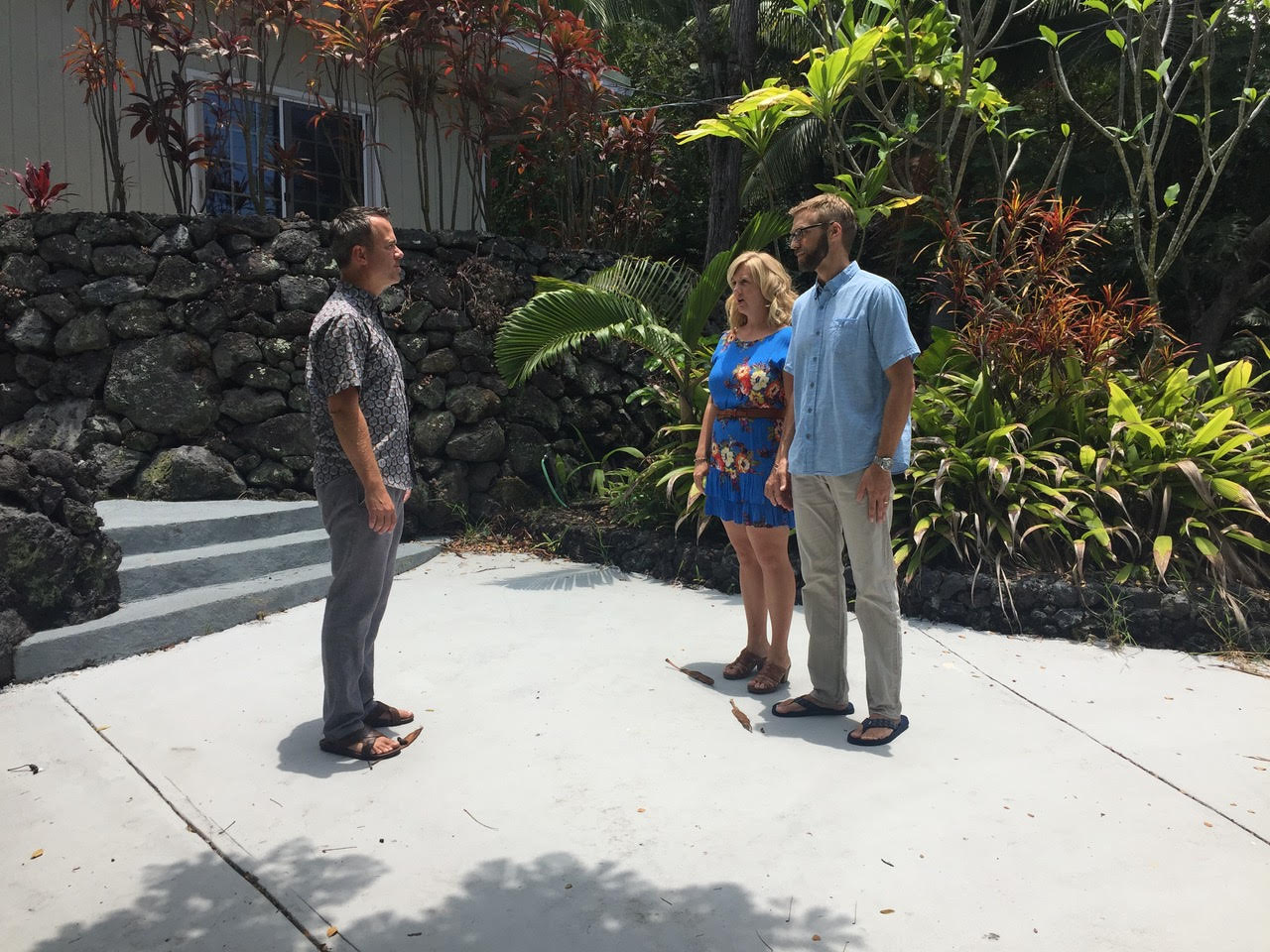 A New Home in Kailua-Kona

In October 2017, the Russells were finally able to bring their new daughter home. Since then, they’ve been getting settled back into their Hawaii life and their new Kailua-Kona home on the Big Island. Lallie said, “We got the house ready, put it on VRBO, and we rented it as a vacation rental the whole time we were in Uganda. It gave us a little bit of income while we were there, which was a blessing.”

Chris Russell works as a medical director and a physician’s assistant, but he was only able to take three months leave. Fortunately, he was able to add a three-month unpaid sabbatical. During the Russells absence, their home was fairly steadily rented to sun-seeking vacationers. 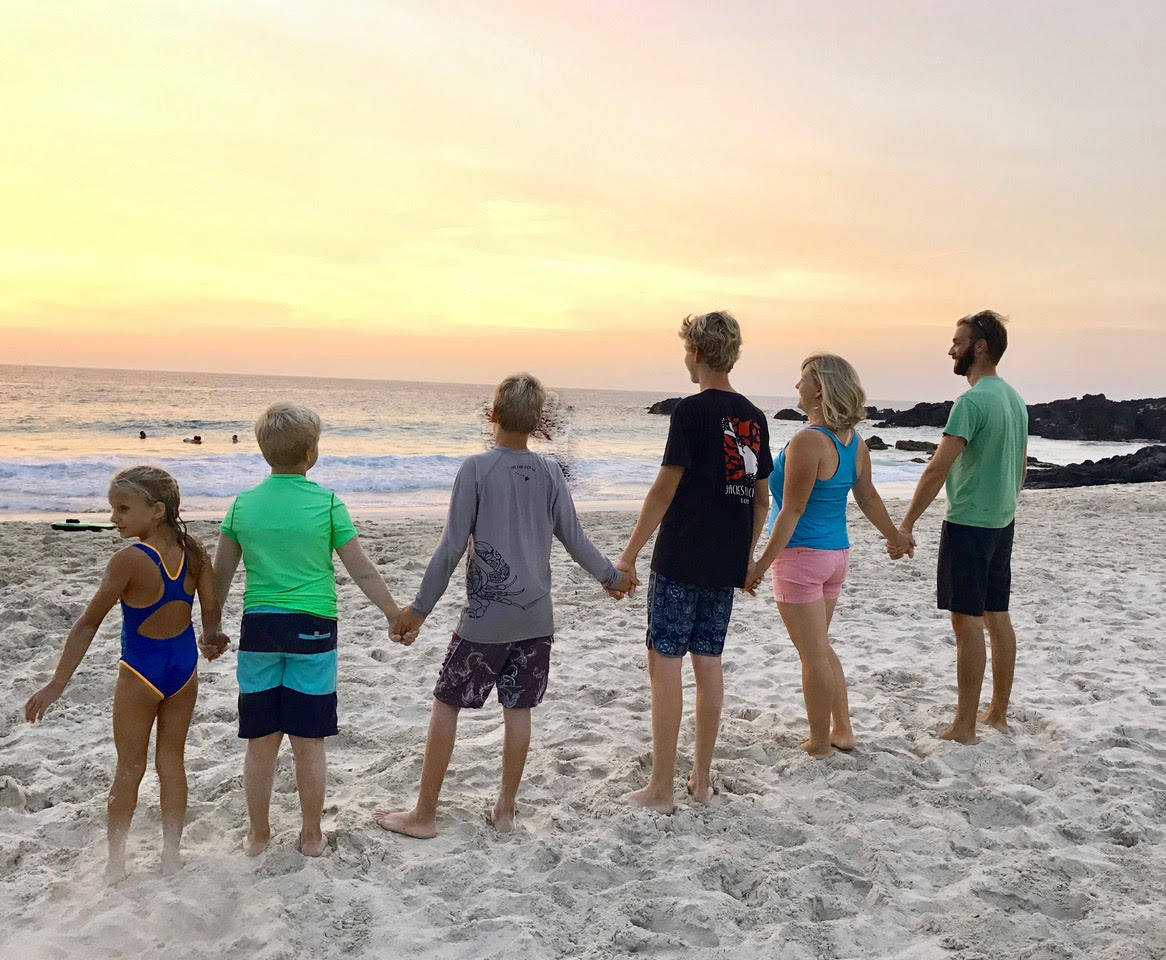 The Russells enjoying some beach time before heading out on their adventure to Africa.

Lallie and Chris have known one another since junior high school and were high school sweethearts in Oregon. Their youngest child was just 13 months old when they first moved to Hawaii more than five years ago.  They told themselves it would just be for a year – or at least, that’s what they told their families back in Oregon.

They fell in love with the Hawaii lifestyle and ended up staying. Lallie said, “We love being able to drive a couple of hours and experience a different microclimate on the Big Island. We’ve often said that if we landed anywhere but the Big Island, we might not have decided to stay as long as we have. But this felt right for us, and we definitely needed more space.” 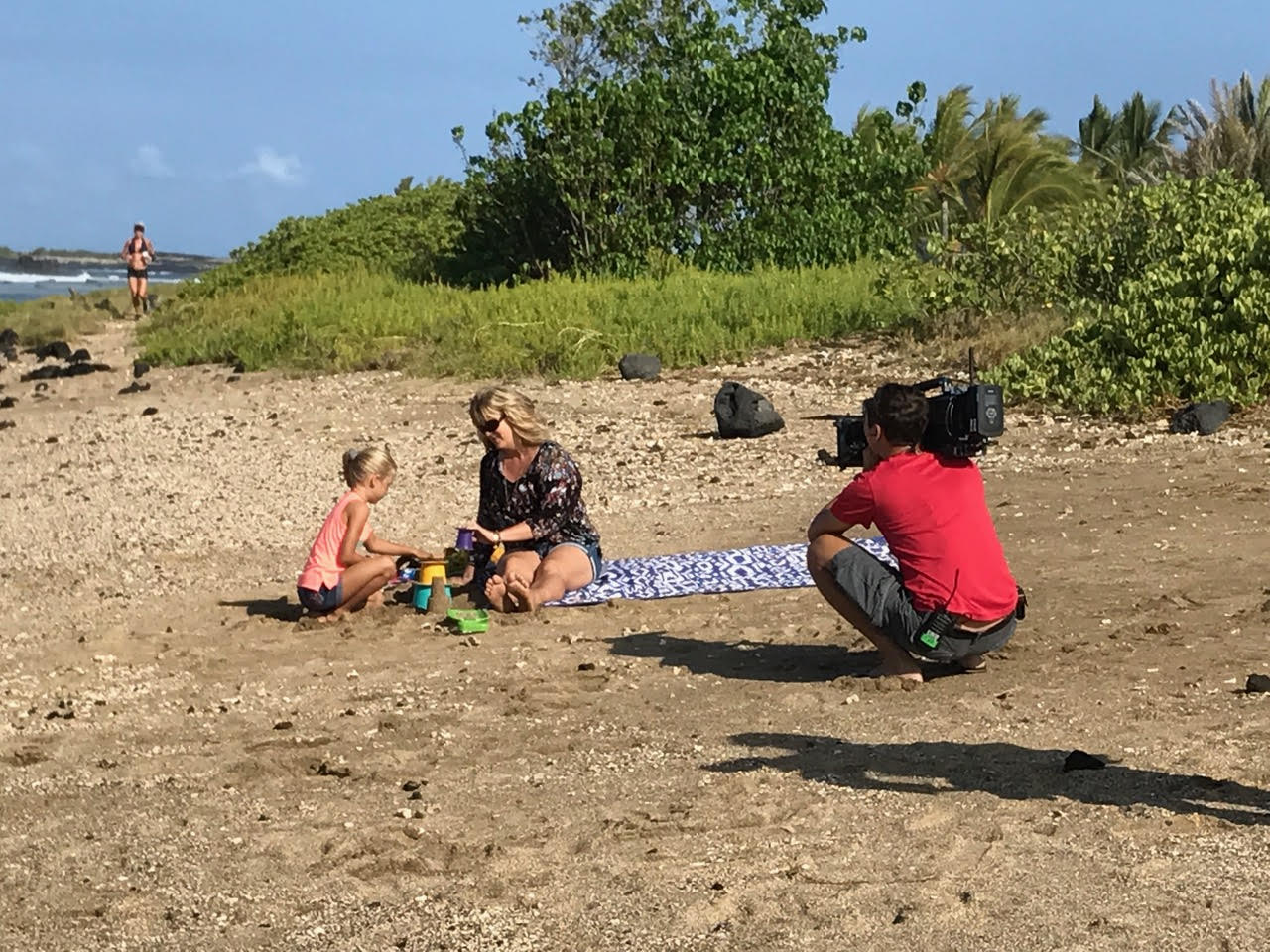 The Russells on a Hawaii beach day with a private lifeguard and an HGTV film crew.

Renters for several years, the Russell family definitely needed more space for their growing family. Their five children are now aged from seven to 15 years old. Lallie Russell homeschools all of them here at home, too. “We love our community here in Kona and we felt it was time to put down roots,” said Lallie.

Before departing for Africa, Hawaii Life realtor Mike Despard helped the Russells find a spacious home that fit their growing family’s needs. The home sits on an acre in the Kailua-Kona area of the Big Island.”Our new house is basically a kid’s dream, with a grassy yard, a separate, screened-in house that serves as their playroom, a treehouse built into a big mango tree in the yard, and a wonderful pool,” said Lallie Russell. 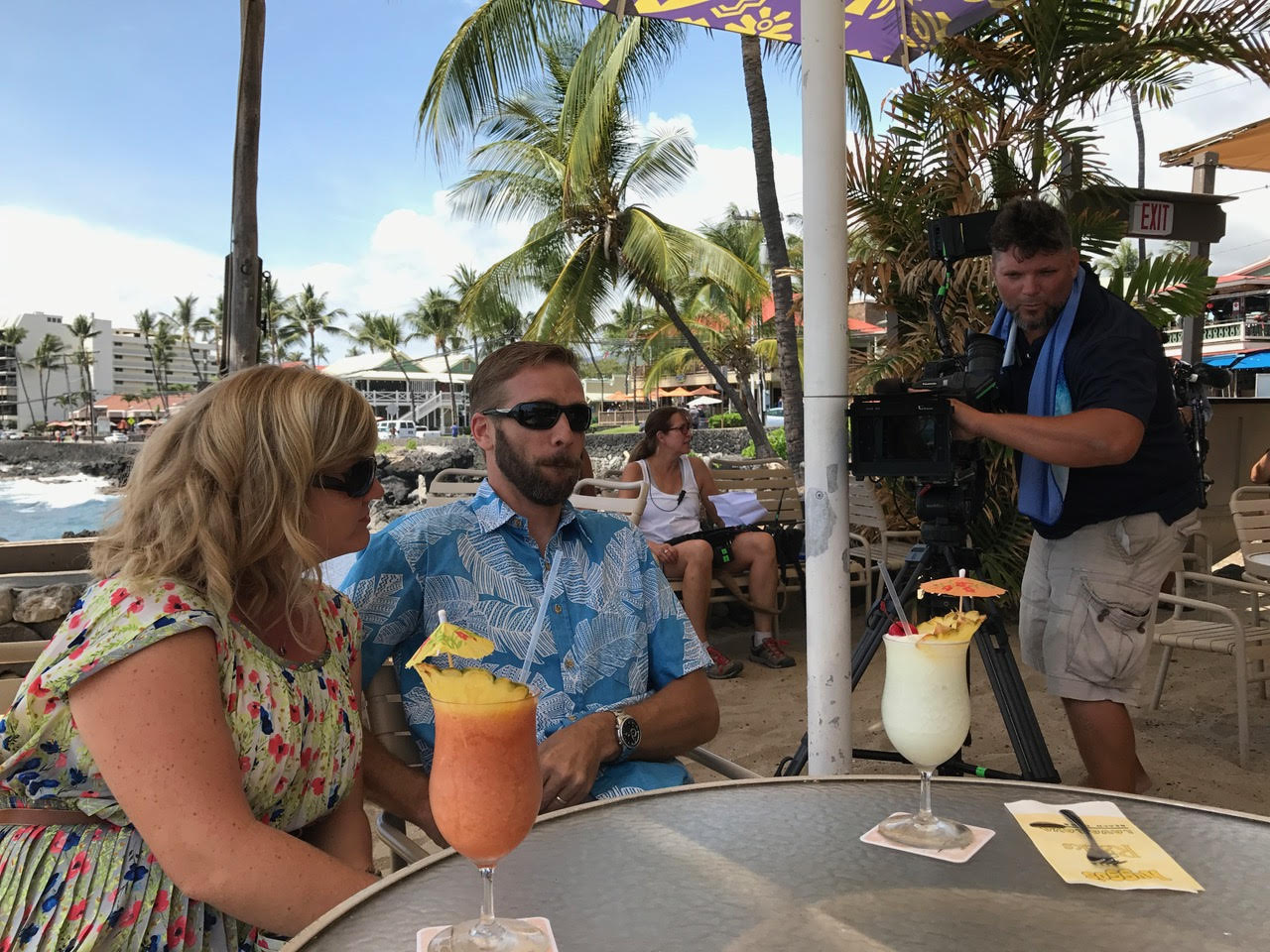 Tropical drinks, swaying palms & a giant camera! Chris and Lallie Russell on set with HGTV on the shoreline in Kailua-Kona.

There are tons of unique features inside the Russells’ new home, too. A huge lava rock fountain is the centerpiece in what Lallie describes as “a crazy huge room.” Their kids have fun climbing on a rock wall and using their own secret tunnel that connects the two kids’ bedrooms. Some of the smaller Russell children can stand fully upright in this space, so Chris installed rock climbing grips on the bedroom wall leading up to the passageway, to make the kids’ space more active and fun. The passageway serves as an extra playroom in an already expansive 4,000 square feet of living space. All five of their kids have settled in nicely and are enjoying the home’s many kid-friendly features. 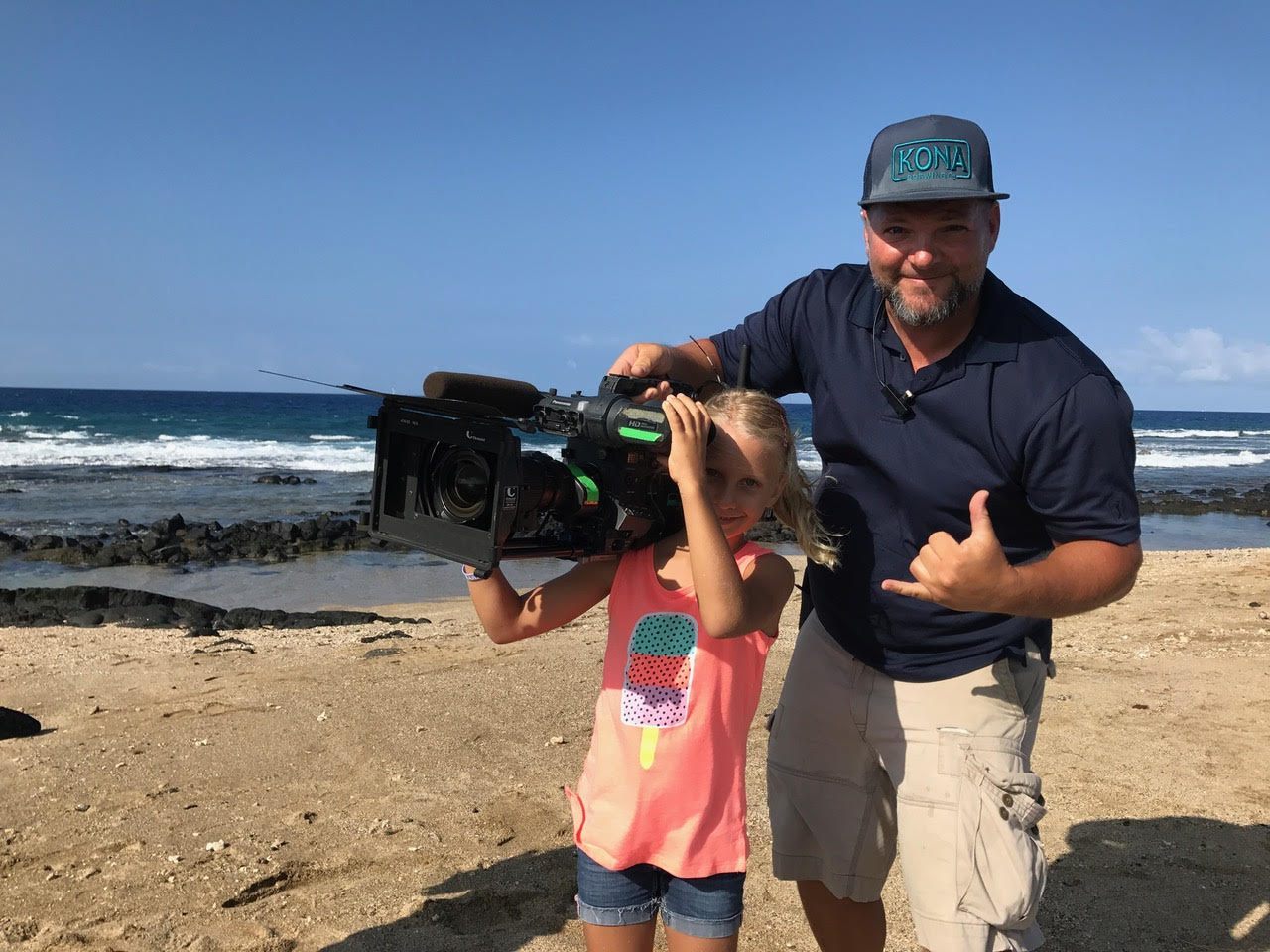 HGTV crew members showed the Russell kids the view from behind the camera, too.

The Russells returned to Hawaii and to their new home in October with the newest addition to their family, a then six-year-old Daphine Amari Grace. Lallie Russell told us that Daphine means “victory” and Amari means “loved one.” Lallie explained, “Her name is so meaningful considering she was orphaned, has survived having sickle cell disease in an impoverished orphanage with little healthcare, and she comes from a country that is not very adoption friendly. She is now a loved member of our family.” Grace is a name Lallie and Chris added and it’s a reflection of the Russell family’s deep faith.

Their new Big Island home boasts an ohana unit that Lallie claims, “is always full with visiting grandparents, family, and friends.” Next month, a group of friends from overseas will be coming for a visit. “Our ohana now includes friends from all over the world and our Ugandan friends who will be staying with us. They run OtinoWaa Children’s Village, one of the orphanages we love and support in Uganda,” said Lallie. 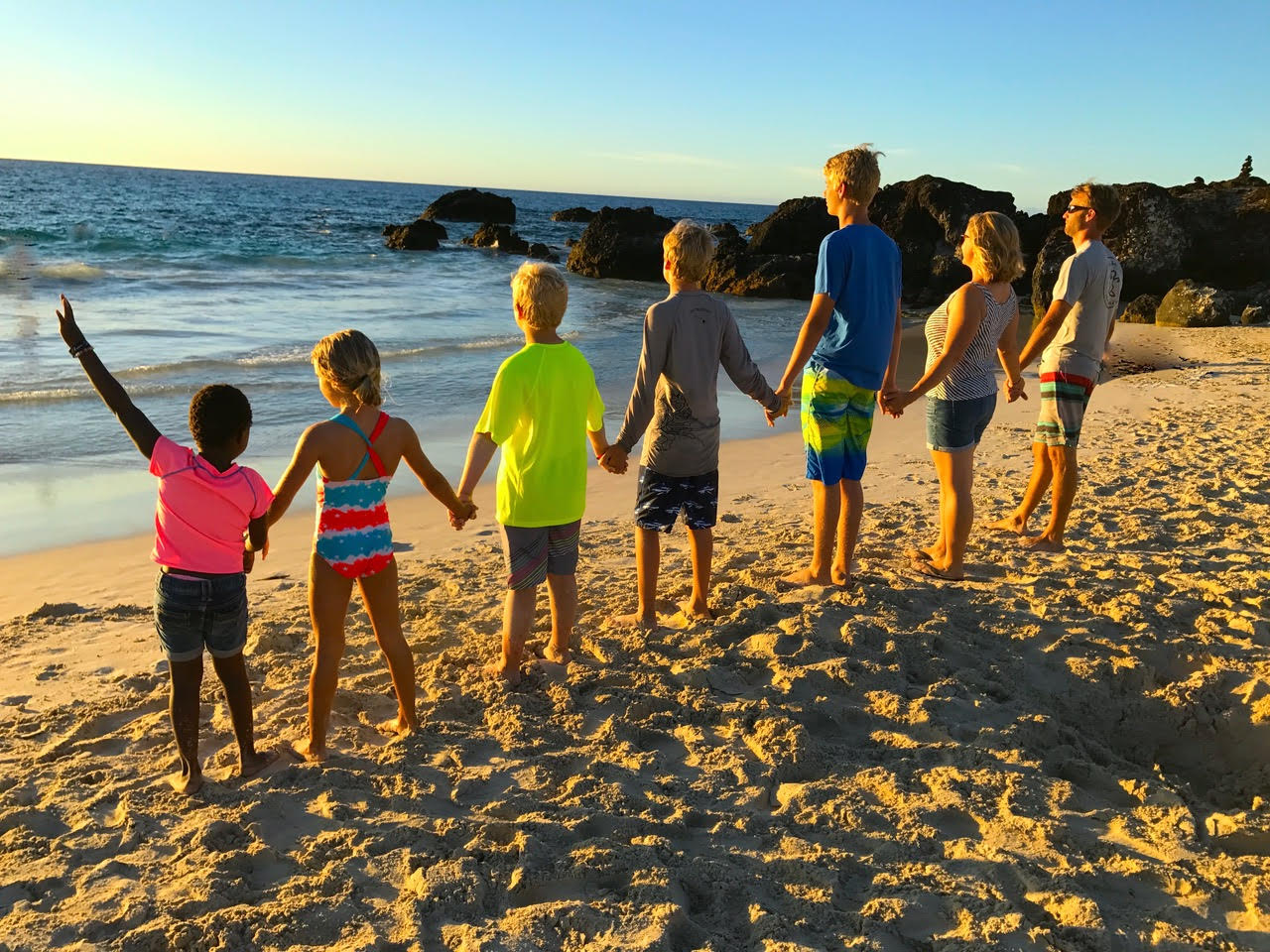 The Russell family six months after their HGTV experience, on the beach on the Big Island with their expanded family.

The Russells On Set at HGTV’s Hawaii Life

We asked Lallie about their experience on the set of HGTV’s Hawai‘i Life. After a few days viewing homes, they expected it to be challenging with four kids in tow. It turned out, the kids liked the experience quite a bit. “They felt like they were treated like kings and queens, with all the little snacks. They didn’t go to see the homes with us, though they did get to make leis, play games on the beach, eat at a BBQ place, and have shave ice at 8:00 in the morning!” said Lallie. 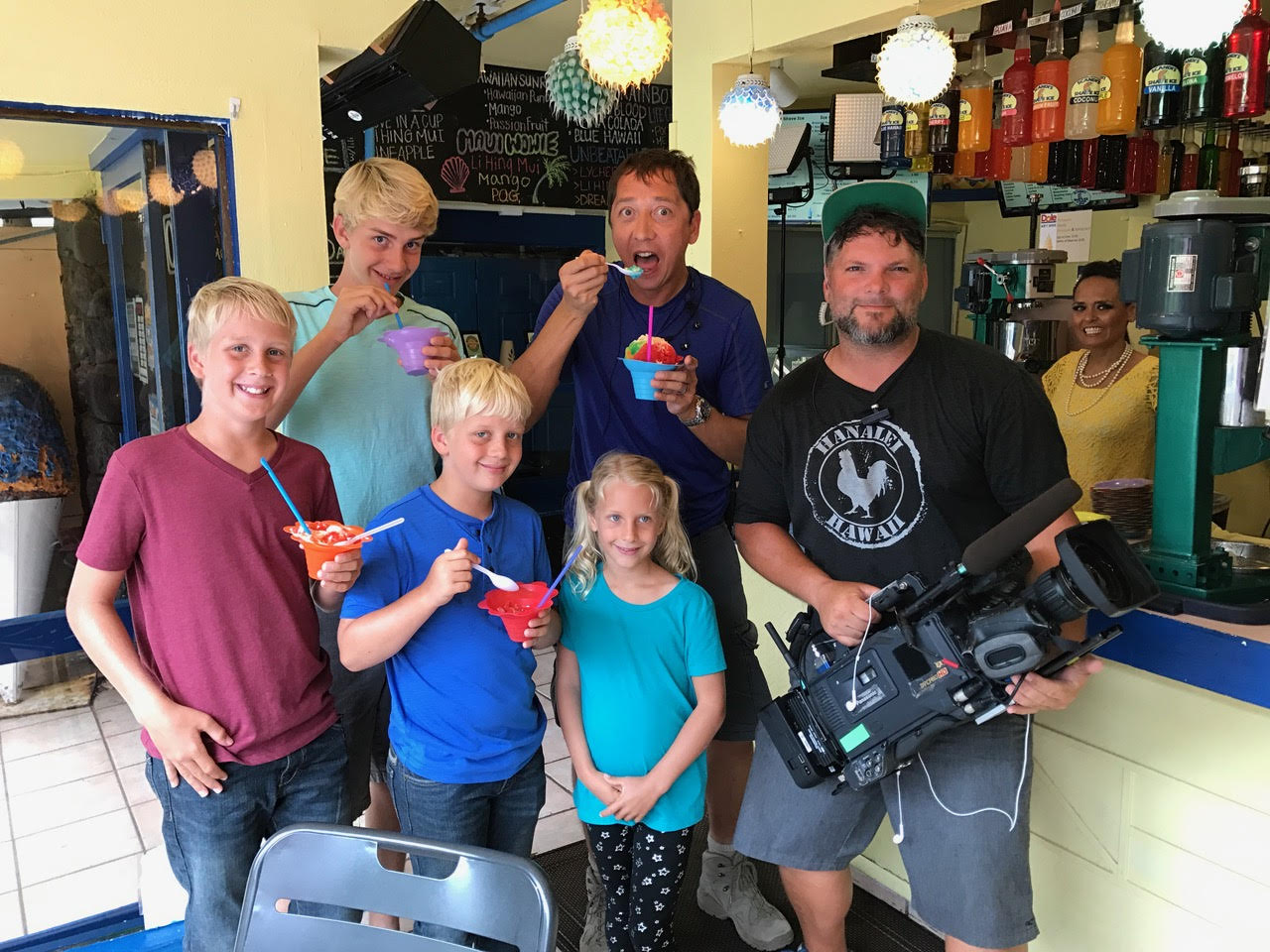 “The kids had a good time. The crew paid special attention to them and gave them treats. The camera guys joked with them and let the kids hold their cameras.” One of their favorite aspects of filming was getting “miked up.” Lallie told us, “Our oldest son will be 16 soon and has always been interested in film, in acting and directing. So he really enjoyed it. He recently got to be an extra in a film production here  – so it was an exciting experience for him,” said Lallie Russell. 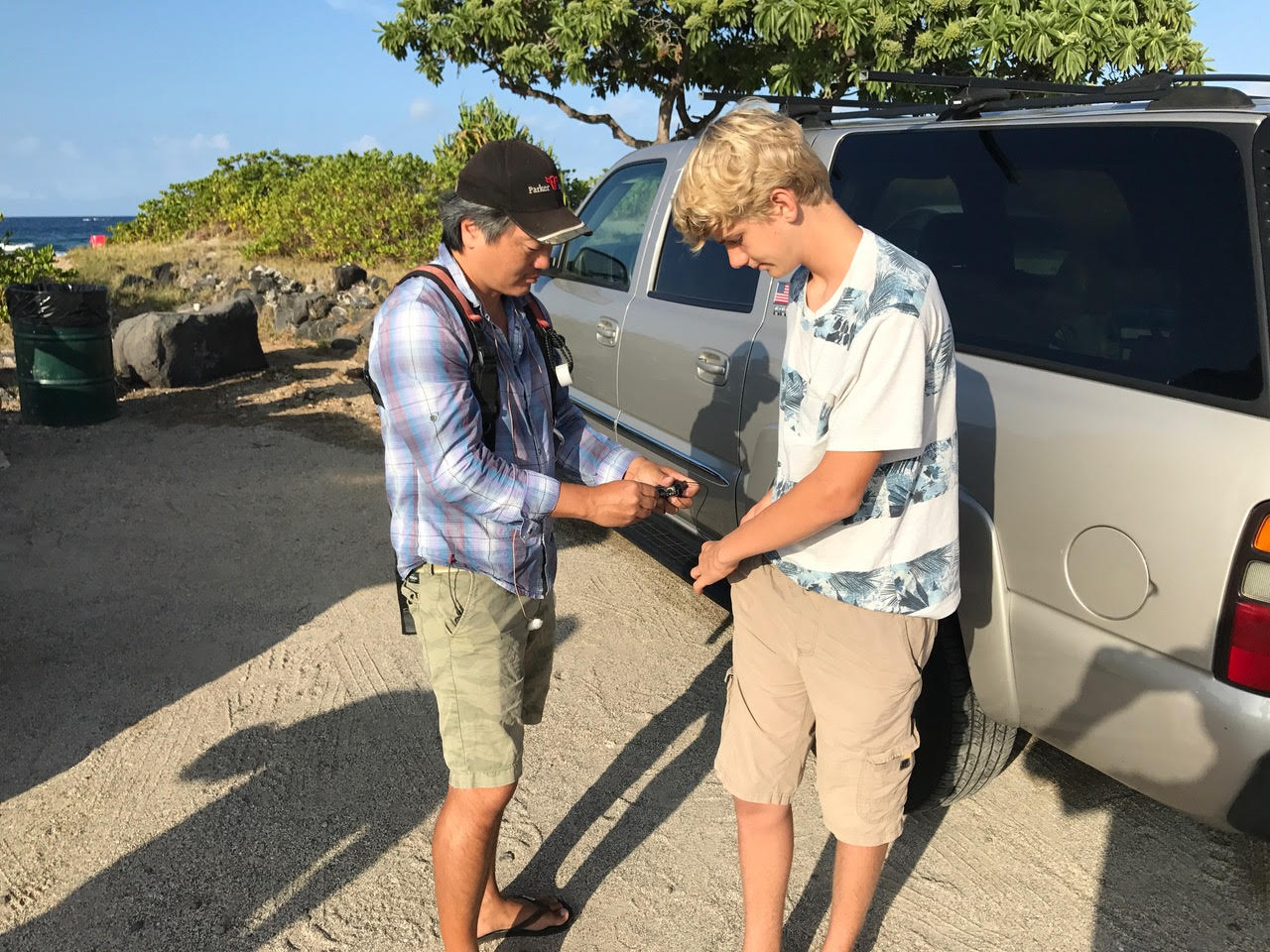 The Russells episode aired in the fall while they were still in Uganda. Back home in Oregon and California, their relatives had been missing them so they really enjoyed getting to watch the show. Lallie added, “Some of our family taped the show watched it every day until we got back.”

A Family Adventure with Heart

What would the Russells say to those considering an appearance on HGTV’s Hawai‘i Life? “I would say go for it! Have fun and be flexible,” says Lallie Russell. “We have a very strong faith, so one of the reasons we agreed to do the show was the hope that if other people heard of us adopting, it would spur others to adopt, too! We also just thought it sounded like a fun adventure, and we are pretty adventurous. But mostly, we hoped our story might touch others who have a heart for adoption.” 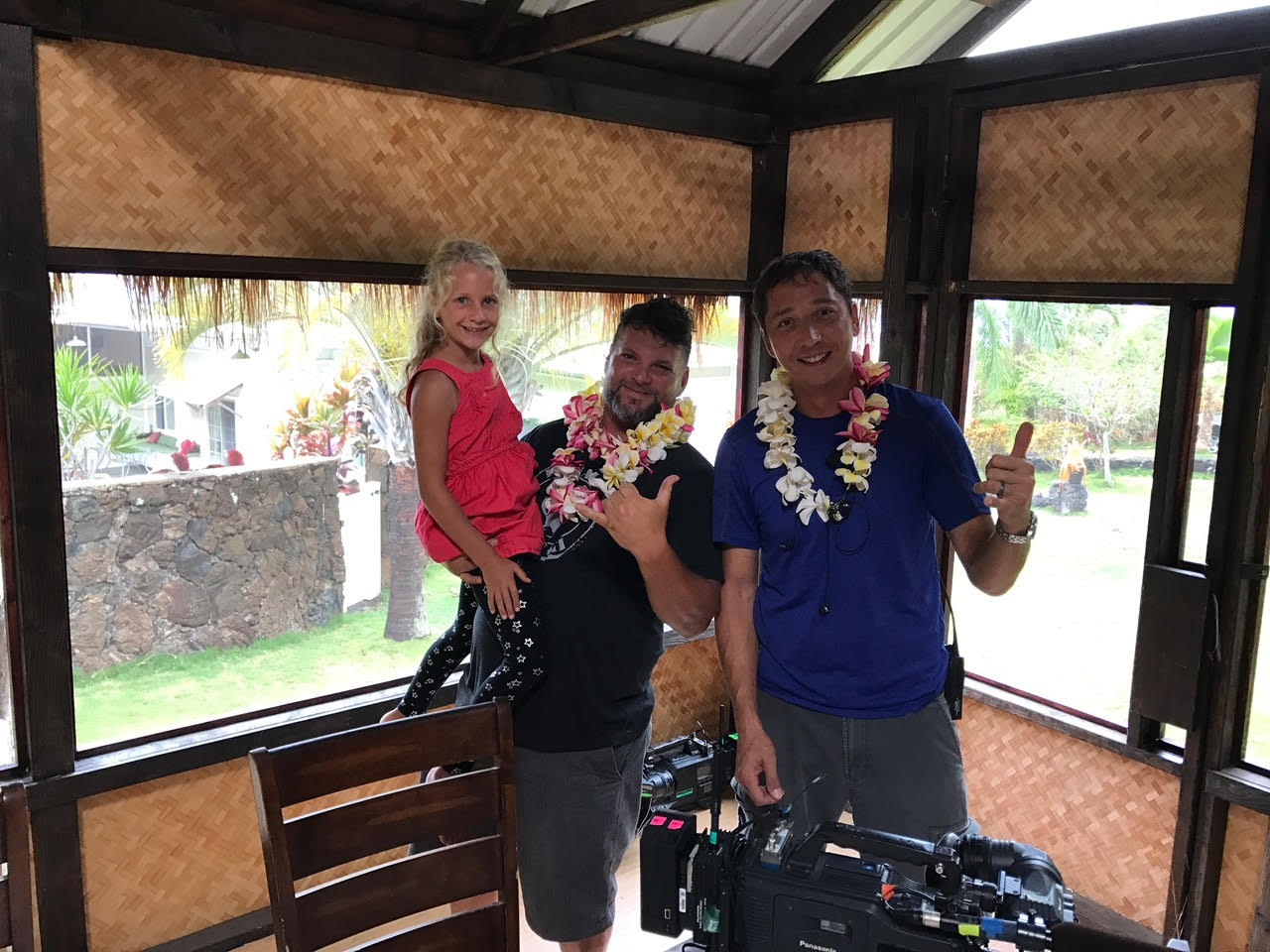 If you’re interested in appearing on the next two seasons of HGTV’s Hawai‘i Life, the production team is currently casting.  More details regarding eligibility can be found in our recent blog post Casting Call for HGTV’s Hawaii Life!

We encourage you to reach out to Casting Director Kaitlin Lau at Left & Right, Inc. You can reach her via email at klau@leftright.tv. She will be happy to send you more details and requirements for this exciting opportunity to shine a spotlight on you and your Hawaii Life! We absolutely cannot wait to see your story! 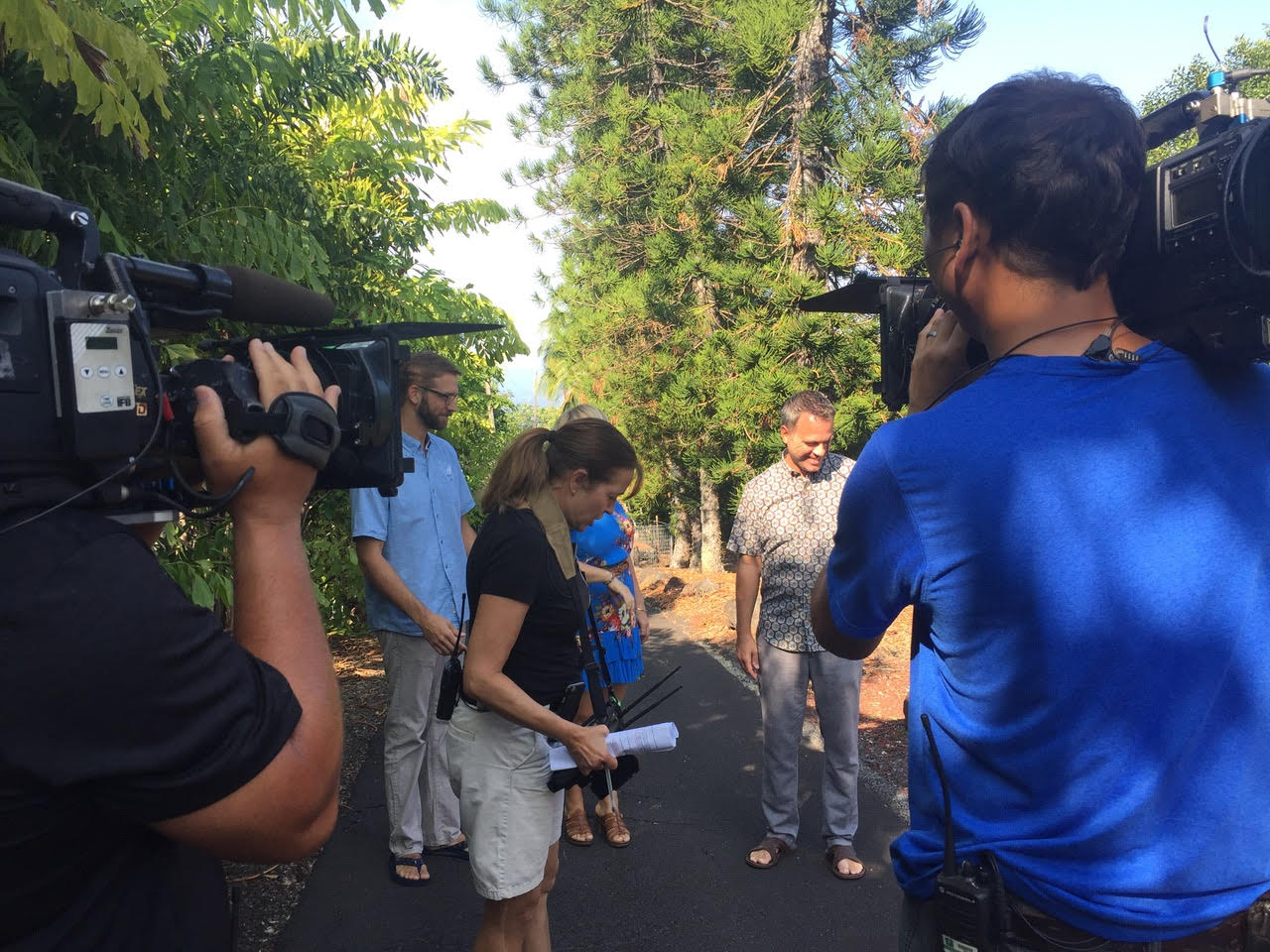 The Russell Family and Hawaii Life agent Mike Despard enjoying some sunshine and the limelight.

Great article! Lallie you express yourself very well. I am so proud of you all. I know it has been quite a journey. Your faith shines through in your words and countenance
Love you all, Grams & Papa

It’s an exciting day for the new homeowners at the spectacular Kona Vista Estate! This custom luxury residential home is …

What Brought Me Into Real Estate?

Over my short 60+ years on earth, I have dabbled in a multitude of occupations and careers. No regrets on …

Beautiful Home in Kona Hills New to the Market Now in Escrow!

This stunning residence has 4-bedrooms, 3-baths, a solar-heated in-ground pool, 4-car garage, and greenhouse, with a 240-degree panoramic ocean view. …