Canoes: Their Role in Hawaii’s Past & Future

There are folks out there who might say that one of the greatest achievements of the ancient Hawaiians would be the fine craftsmanship of the canoe. Native Hawaiians were quite knowledgeable about the ocean and how to navigate across the seas on their canoes. If they had not possessed that knowledge, Hawaii might be a different place today.

The canoe was relied upon as the only way to travel between the islands and to gather fish to feed their families. Hawaiian Kings and Chiefs utilized canoes to display the strength of their armies to those who challenged them.

Entire families would take part in building a canoe and skills were passed down from generation to generation. Often a person who had special skills was needed to perform specific tasks. Sometimes tools and materials that were needed to build a canoe would be limited. Hawaiians would use the fine wood of the koa tree and hollow it out to form a single hull canoe. This canoe would measure to be about 20-30 feet long.

When a man decided he wanted to build a canoe, he couldn’t just get up one day and start building. He would first need to consult with a canoe expert, or a kahuna kalai waa, to find a tall, straight tree to which the man would use to build his canoe. The kahuna would sleep before the shrine in the eating house for the men (hale mua). If he dreamt of a naked man or woman, the belief was that the tree that had been chosen was not a good one. But if his dreams was that of`a man or woman that was well dressed, then the tree would be considered a good one.

Religion played an important part in the lives of Native Hawaiians. The canoe expert would have spent hours training to not only be a skilled builder but a priest who would possess knowledge of the ceremonies that were involved in the construction of a canoe.

The kahuna would lead a team of helpers into the mountains to cut down the koa tree needed. They would hold a thank you ceremony to the gods, and if the elepaio bird pecked at the tree, it would mean that tree was not a good fit for the canoe. But if it passed by the koa tree and did not peck at it, then the tree would be cut down.

Once the canoe was brought back to the village, the final work would be completed in a special halau (canoe shed). A craftsman would use plants and charcoal to create black paint to give a waterproof finish to the koa wood. Hen’s eggs would sometimes be used for a glossy exterior.

Before a canoe would set out for its first voyage, Hawaiians would sacrifice a pig and a dog. The pig symbolized the rooting of the canoe into the ocean and the dog meant the tearing apart of the billows of the ocean. The canoes displayed simple decorative features such as no fancy carvings or extra wood. A clean and stream-lined design was needed to navigate through Hawaii’s rough waters and surf. 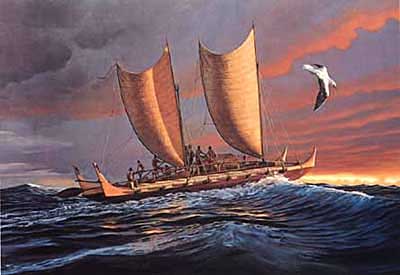 The Different Types of Hawaiian Canoes

When it was time to lash the canoe, it would be a personal and sacred event, and talking during this time was not allowed, or at least it was kept to a minimum. This event was taken very seriously among the community. For instance, if the canoe being lashed had been for the chief and the craftsmen working on the canoe were disturbed, then the person committing the offense would be put to death.

Lashing a canoe meant for cording to be wrapped in a way to preen the lashing from loosening if the cord would ever break. Today’s outrigger canoes are very similar in design to the ancient ones used in the days of Captain Cook. 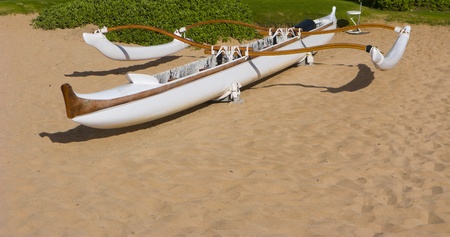 When Captain Cook arrived in Hawaii in 1779, he reported being surrounded by at least 1,500 canoes. The Hawaiian culture once depended upon the ocean and canoes to support their way of life, but lost the desire to sustain that life once European influence had been introduced.

King Kalakaua tried to bring back interest in canoeing by naming his birthday as the official regatta day. But after his death in 1891, interest in sustaining canoeing began to decline.

In 1908, several water enthusiasts formed the Outrigger Canoe Club. In the first days of the club, sailing competitions as well as swimming were included. Interest began to gravitate towards paddling the more sleek and slender canoes, with long distance canoe paddling gaining popularity. 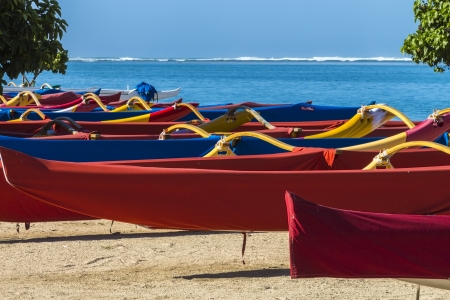 Hokule’a: Sustaining and reviving much of Hawaii’s historic culture has become widespread across the state. In 1974, Hawaii’s first voyaging canoe since the days of the ancient Hawaiians, the Hokule’a, was built.

Hokule’a and her crew would sail on her first voyage to Tahiti in 1976. Hawaiians were facing cultural extinction, and for Hokule’a’s maiden voyage, the crew did not have a navigator to help guide them on their journey. They turned to Mau Piailug from Micronesia to help teach and guide them.

Hokule’a would set sail for Tahiti again in 1978, which nearly cost the entire crew after it capsized. Tragedy would strike in the loss of Eddie Aikau, who famously paddled away on his surfboard in search of help, but instead would be lost at sea. Between 1975 to 2000, Hokule’a had completed two successful voyages to Tahiti as well traveling to Aotearoa and Rapanui.

Mo’okiha o Pi’ilani: Maui now has her own deep-sea double-hulled canoe and it is being docked at Maalaea Harbor. It is with great hope that this new canoe will help teach the younger generations about Hawaii’s rich cultural past in canoeing and celestial navigation.

It took nearly 20 years to build Maui’s first voyaging canoe in over 600 years. Teaching the younger generation about Hawaii’s canoeing past will help keep the culture alive and generations will have knowledge of how their ancestors came to these islands.

Today the Hokule’a is trying to carry on the path of our ancestors and follow the same passage they took so many years ago. Learn more about the tradition and follow the travels of the Polynesian Voyaging Society.

If you have any questions, or would like to learn about Maui real estate opportunities, please contact me.

What is an Escalation Clause and Should You Use One?

Are you in the market? Have you been competing with other offers and losing out? If so, you may want to consider …

If you’re active-duty or your military family is moving to Hawaii in 2020, we’ve got some helpful resources for you, …

Kohina Lottery Are you looking to purchase a NEW home in Ewa Beach, Hawaii? The next lottery release at Kohina …

Where’s the Beef? A Survey Will Tell You!

Nothing sparks a livelier conversation than the issue of surveys. That’s one reason I mention it so often. It’s interesting …