If you live or spend time in Honolulu, it is likely that you have seen and possibly admire the architecture of Alfred Preis.  Preis is largely known for his latest works — the USS Arizona Memorial at Pearl Harbor and the entrance arch at Honolulu Zoo, considered to be one of Kapiolani Park’s finest structures. His passion, however, can be seen in residential areas throughout Honolulu, where he built numerous homes filled with his signature Mid-century modern (MCM) touches. Preis sought to create a seamless flow between indoor living space and Hawai’i’s outdoor beauty with the use of floor to ceiling windows and large glass doors. Another signature of Preis’ MCM architecture is the use of butterfly roofs and clean, simple lines that lend to the effect of living very closely with nature.

Originally from Austria, Preis followed his yearning for island life and made the long trip to Hawai’i. The journey was not an easy one, and upon his arrival, Preis was held in a detention center on Sand Island due to the bombing at Pearl Harbor on December 7th, 1941. After his release three months later, Preis found work at the Hawai’i territorial department of Public works where his love for all things Hawai’i was fostered. He eventually struck out on his own, opening his own practice and was appointed first Executive Director of the State Foundation on Culture and the Arts. Preis used his position to champion a movement requiring Hawai’i companies to donate 1% of construction costs towards the furthering of public arts. During the span of his life, Preis completed a multitude of residential homes in Honolulu that have withstood the test of time in both structural soundness and style.

Alfred Preis homes are not often for sale, maybe one or two a year if you are lucky. And when they do become available, they are often sold quickly. The latest Preis home listed for sale is at 3769 Mariposa Drive. 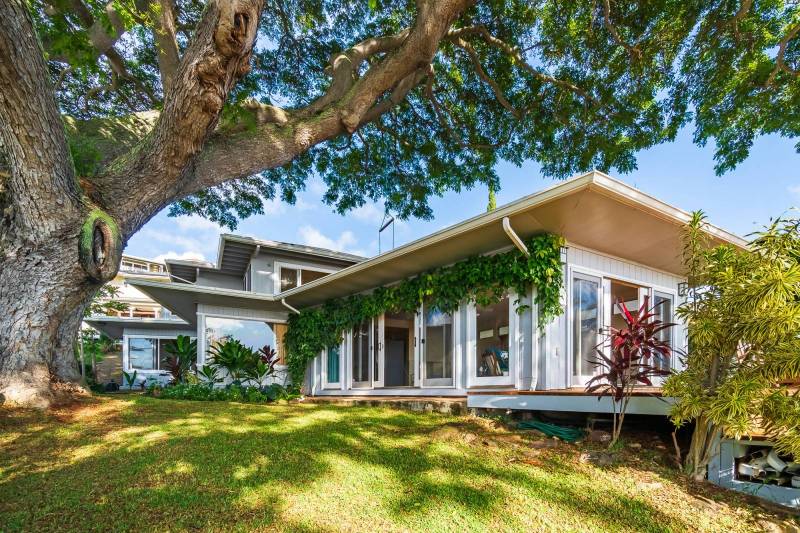 Beautiful sliding glass doors and large picturesque windows open up to a stunning view of Diamond Head and invite nature to be a part of everyday life. His use of brick and redwood in this home (and many of his others in Hawai’i) have proved to be a fine choice of materials due to their resistance to humidity, rot, and termites. 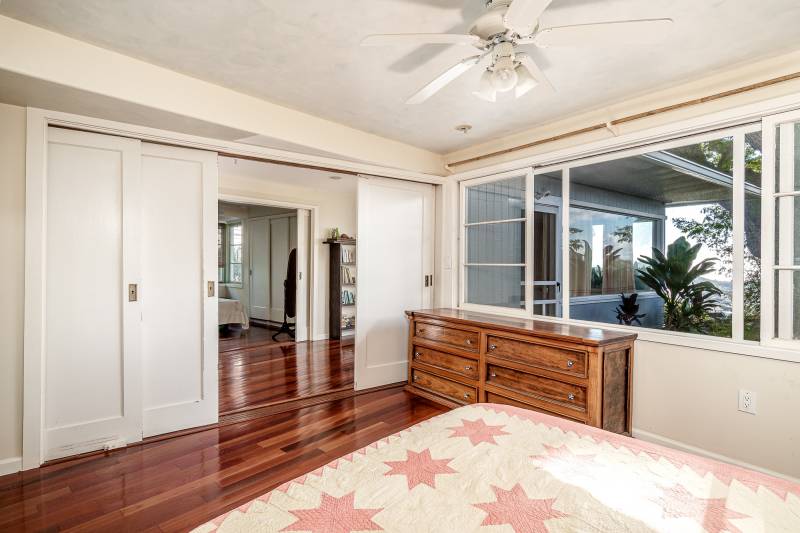 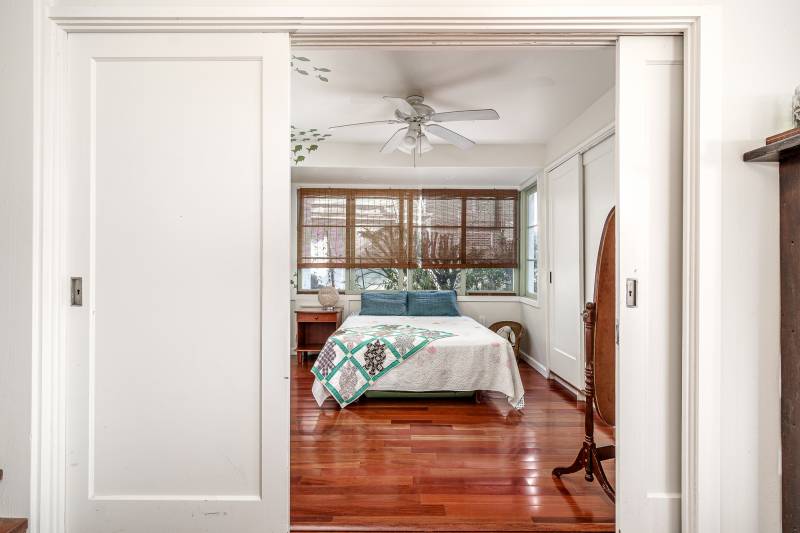 Pocket doors and clean lines are amongst several Mid-century modern traits of this property. The two downstairs bedrooms have multi pocket doors connecting them to the wide hallway. These doors can slide all the way into the walls, transforming the space into a large connected single room. The effect is quite inviting and lends to the flexibility of the floor plan. 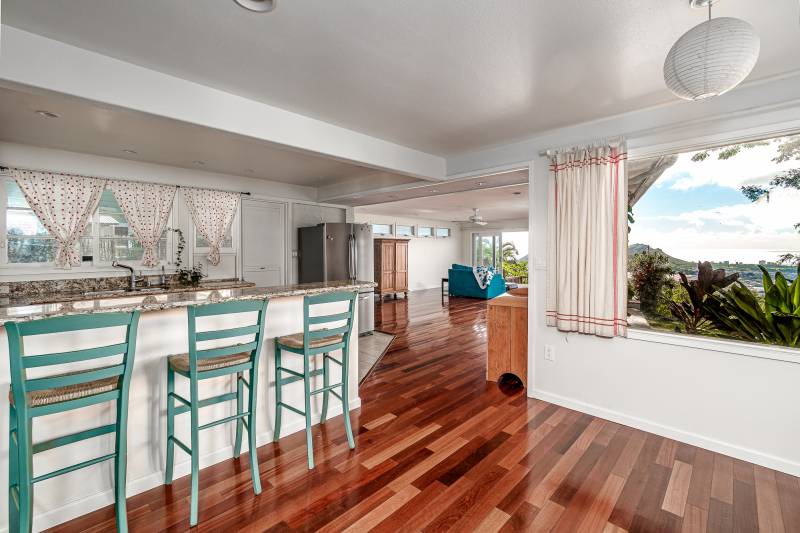 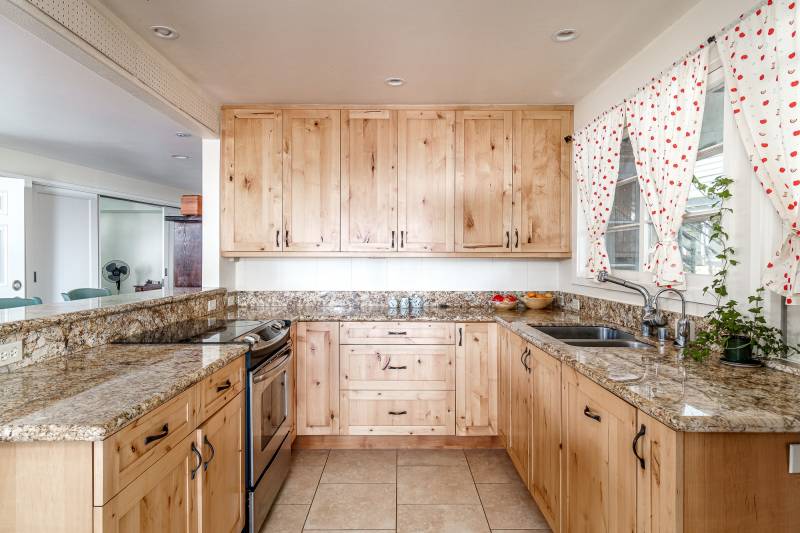 The open, connected aesthetic continues in the remodeled kitchen. Upon entering the front door, you are greeted by a large granite bar that is centered around the kitchen and living room. The kitchen has been upgraded in knotty pine, which creates a light and welcoming energy. The light wood of the cabinets creates a striking contrast with the richer hues of engineered wood floors throughout. The floors are African Jatoba, which varies in tone, giving the floors a very organic, original feel that compliments the uniqueness of the home. 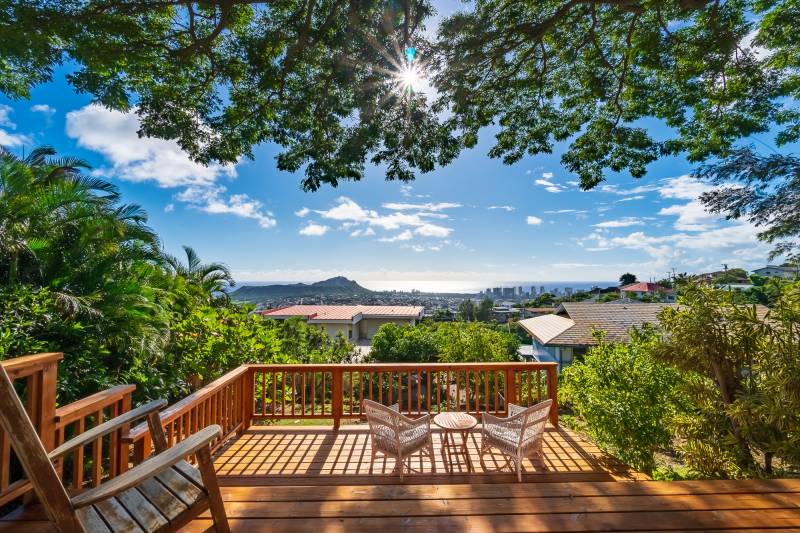 The home on Mariposa Drive sits beneath a majestic Monkeypod tree that sprawls out over the flat, reinforced roof and gentle slope that tapers onto a large yard planted with many local favorites such as breadfruit, kukui, and mandarin orange, along with more rare finds like white fig and pomegranate trees. A multi-level lanai looks out over the fruit tree laden yard below and, just beyond the property line, Diamond Head, Kahala, and Waikiki provide a postcard-worthy panoramic view. 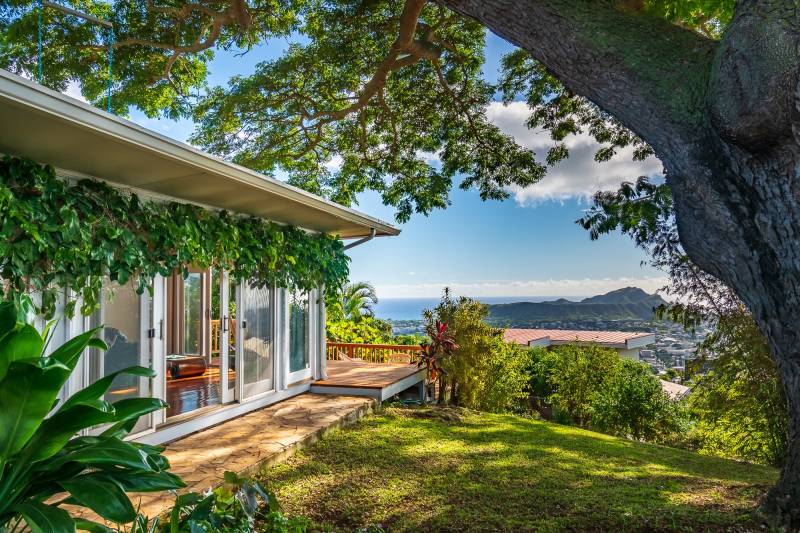 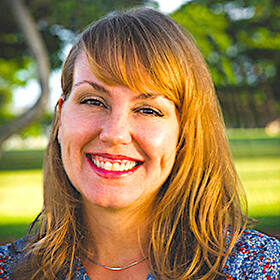 Heather Deigert is a REALTOR Associate with Hawai'i Life. You can email me at HeatherDeigert@HawaiiLife.com or via phone at (808) 295-5313.

Beautiful home . I wish they would put list prices in these very nice informative articles.