This year on January 31st, February 28th, and March 28th is the annual Sanctuary Ocean Count. I had the great pleasure of volunteering for my first whale count in January at Makahuena Point on the south shore of Kauai. Anyone who wants to participate is required to attend one of the remaining 2 training sessions held on the Saturday before the count. In addition to learning how to observe and record the different behaviors while also counting the whales, you’ll also hear a lot of facts and a few theories about these incredible mammals and what they’re doing.

The count, which takes place at about 60 different sites on O’ahu, Hawai’i, and Kaua’i, happens from 8:00 a.m. to 12:15 p.m. We worked in pairs and placed ourselves with enough room to not get in each other’s way, with one person recording data while another watched the ocean for activity. My partner and I switched roles each half hour, when you start counting all over again.

At each site, you’re responsible for the entire ocean while scanning from left to right. The behaviors to record include breach, slap, dive, and blow. Because there were so many active whales in the first hour or so, we had to use another sheet of paper to record what we were seeing. Often there was so much activity being called that the recorder could barely keep up.

While observing the whales, we were noting any other marine activity. Near us and moving to the East was an active group of dolphins feeding on a large school of fish. We also saw a pair of albatrosses flying low along the shoreline. A few times a recreational boat would get closer to the whales than the 100 yard limit required by law, and they didn’t always slow down.

The day was perfect for the count with a very calm ocean and clear skies, but around 11 a.m. the hazy clouds brought on harsh glare conditions making it hard to distinguish the sky from the ocean. In the final moments of the count, a large female breached very close directly in front of us, then her calf did the same thing. It was truly an awe-inspiring finale to the day.

According to our team leaders, the January count at Makahuena Point might have been the busiest ever. When I signed up for this site I had no idea it typically records the most whales. Maybe that has to do with having such a large area of ocean to scan due to the position of Makahuena Point?

Throughout the morning we hardly had a chance to drink some water or eat the yummy cookies our team leader baked. Only after finishing did I realize how exhausted I was, but not surprising after 4 hours of being intensely focused while mostly standing in the sun. Undaunted, I’ve since signed up for the next count at the end of February. If you’re interested in volunteering, go to the Sanctuary Ocean Count website for detailed information.

Seeing these spellbinding leviathans from my lanai nearly every day since their return this season really piqued my interest in volunteering for this year’s count. At Poipu Kapili (where I live), all the condos have ocean views, and the Makahuena condos next to Makahuena Point, where we were set up for the count, have many units that take advantage of the ocean view as well. Along the south shore in the Poipu area are a variety of condos and houses with excellent vantage points for whale watching. 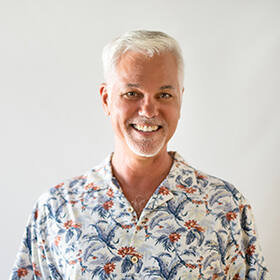 James DeVille is a REALTOR Salesperson with Hawai'i Life. You can email me at JimDeVille@HawaiiLife.com or via phone at (808) 634-4366.